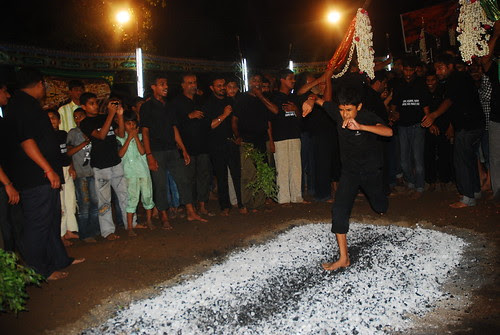 The Shias Of Mumbai 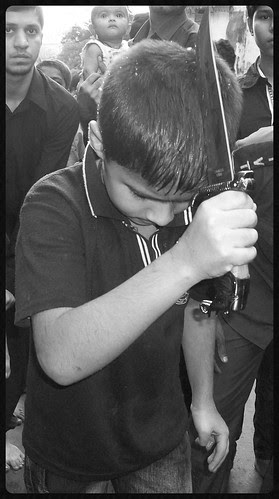 The Shias Of Mumbai, a photo by firoze shakir photographerno1 on Flickr.

an intriguing race
living in mumbai
from every place
from lucknow
delhi kolkatta
hyderabad
chennai
migrants once
now mumbaikars
holding on to their
space ..congregating
for maulana athar sabs
majlis at moghul masjid
tears running down their
face or at kaisar bagh..
with alams in their hands
with dignity and grace
or at imamiya masjid
amin imamabada ..as
always .. imamwada
sabils kava hyderi
kutub khana ..thoughts
surface .. getting the
zanjir kama blades
sharpened ..mast
dhar lagana bambaiya
phrase .. the shias
of mumbai dressed
in black..ghame
hussain embrace
every land is karbala
every day is ashura
be it your birthplace
hussain al mini
wa ana minal hussain
i am from hussain
hussain is from me
words they tried
but could not erase
the shias persecuted
bombed killed
murdered plundered
by the yazidis ..
suicide bombers their
so called .. jihad
martyrdom misplaced

This Year I Did Not Shoot The Chhath Puja At Juhu Beach.. 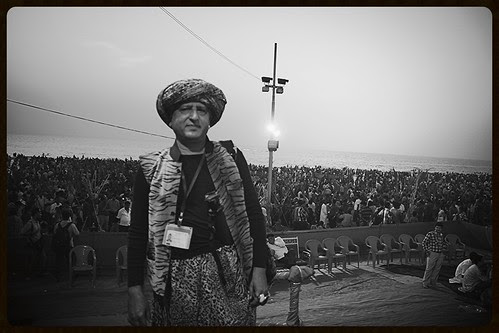 This Year I Did Not Shoot The Chhath Puja At Juhu Beach.., a photo by firoze shakir photographerno1 on Flickr.

I am a Shia Muslim in mourning for the Martyrdom of Imam Hussain Grandson of The Holy Prophet , who was ruthlessly murdered by the Terrorists of Yazid the Caliph Of Umayad Dynasty..We wear black clothes , in my case I only wear black clothes or tiger prints ,,,I stopped wearing vibrant colors since I became a Malang a semi Sufi Monk in my case.
We are very strict about our mourning and austere in our emotions that is now centered around Ghame Hussain and the Unforgettable Tragedy of Imam Hussain at Karbala.

Neither do I attend any Sufi Urus in the month of Moharam...or any Hindu feast...the Chhhath Puja I have documented passionately as a tribute to the Bihari Mumbaikars of our city , but this year I kept away from their celebrations ,,,

This picture was shot last year ,Chhath Puja 2012 that took place the next day after the sad demise of Shree Balalasaheb Thackeray..


About Chhath Puja
from Wikipedia

Chhath (Hindi: छठ, also called Dala Chhath) is an ancient Hindu festival and only Vedic Festival dedicated to the Hindu Sun God, Surya, also known as Surya Shashti.[1] The Chhath Puja is performed in order to thank Surya for sustaining life on earth and to request the granting of certain wishes.[2] The Sun, considered the god of energy and of the life-force, is worshiped during the Chhath festival to promote well-being, prosperity and progress. In Hinduism, Sun worship is believed to help cure a variety of diseases, including leprosy, and helps ensure the longevity and prosperity of family members, friends, and elders.
The rituals of the festival are rigorous and are observed over a period of four days. They include holy bathing, fasting and abstaining from drinking water (Vratta), standing in water for long periods of time, and offering prashad (prayer offerings) and aragh to the setting and rising sun.
Although it is observed most elaborately in Bihar, Jharkhand, Eastern UP and the Terai regions of Nepal in modern times, and is more prevalent in areas where migrants from those areas have a presence, it is celebrated in all regions and major urban centers in India. The festival is celebrated in the regions including but not exclusive to the northeast region of India, Madhya Pradesh, Uttar Pradesh, Chhattisgarh, Chandigarh, Gujarat,[3] Delhi,[4] Mumbai[5] and Mauritius.[6]

Chhath puja is performed on kartika Shukala Shashti, which is the sixth day of the month of Kartika in the Hindu Calendar. This falls typically in the month of October or November in the Gregorian Calendar.
It is also celebrated in the summer (March–April), on Chaitra Shashti, some days after Holi; this event is called Chaiti Chhath.[7] The former is more popular because winter is the usual festive season in North India, and Chhath, being an arduous observance, requiring the worshipers to fast without water for around 36 hours continuously, is easier to undertake in the Indian winters.

[edit]Etymology
The word chhath denotes the number 6 in Hindi[8] and the festival is celebrated on the sixth day of the Hindu lunar month of KARTIKA. The word is a Prakrit derivation from the Sanskrit ṣaṣṭhi, meaning sixth.
[edit]History

It is believed that the Maga Purohits (modern days known as Shakya Dwipi Brahmins) were invited by local kings for their expertise in Sun worshiping. They started the tradition of Chhat Puja. Today Chhat Puja is celebrated specially in those places where Shakya Dwipi Brahmins are found.
It is believed that the ritual of Chhath puja may even predate the ancient Vedas texts, as the Rigveda contains hymns worshiping the Sun god and describes similar rituals. The rituals also find reference in the Sanskrit epic poem Mahābhārata in which Draupadi is depicted as observing similar rites.
In the poem, Draupadi and the Pandavas, rulers of Hastinapur (modern Delhi), performed the Chhath ritual on the advice of noble sage Dhaumya. Through her worship of the Sun God, Draupadi was not only able to solve her immediate problems, but also helped the Pandavas later regain their lost kingdom.
It is also believed that Chhath was started by Karna, the son of Surya (Surya Putra Karna). Surya Putra Karna ruled over the Anga Desh (present day Bhagalpur district of Bihar) during the Mahabharat Age. He was a great warrior and fought against the Pandavas in the Kurukshetra War.
Its yogic/scientific history dates back to the Vedic times. The rishis of yore used this method to remain without any external intake of food as they were able to obtain energy directly from the sun's rays. This was done through the Chhath method.[9] The chhat puja is very popular in Darbhanga, Samastipur, Muzaffarpur, Madhuvani and Dehri-On-Sone (Rohtas),Patna, Dev & Gaya.Nowadays it is celebrated in approximately all parts of India. Chhath Pooja is also celebrated in Mangalore, Karnataka. People from Bihar & UP celebrate Chhath Pooja on Panambur Beach.
[edit]Chhathi Maiya

It is also said that the Goddess that is worshipped during the famous Chhath Puja is known as Chhathi Maiya. Chhathi Maiya is known as Usha in the Vedas. She is believed to be the consort of Surya, the sun god. Some scholars are of the view that she is only the beloved of Surya and some suggest that She is Surya’s wife.
Usha is the term used to refer to dawn – The first light of day. But in the Rig Veda she has more symbolic meaning. Symbolically Usha is the dawn of divine consciousness in the individual aspirant.
During the Chhath Puja, Chhathi Maiya is invoked to bless us with this divine consciousness which will help us to overcome all the troubles in the world – this bless will help us to Moksha or liberation.
[edit]Rituals and traditions