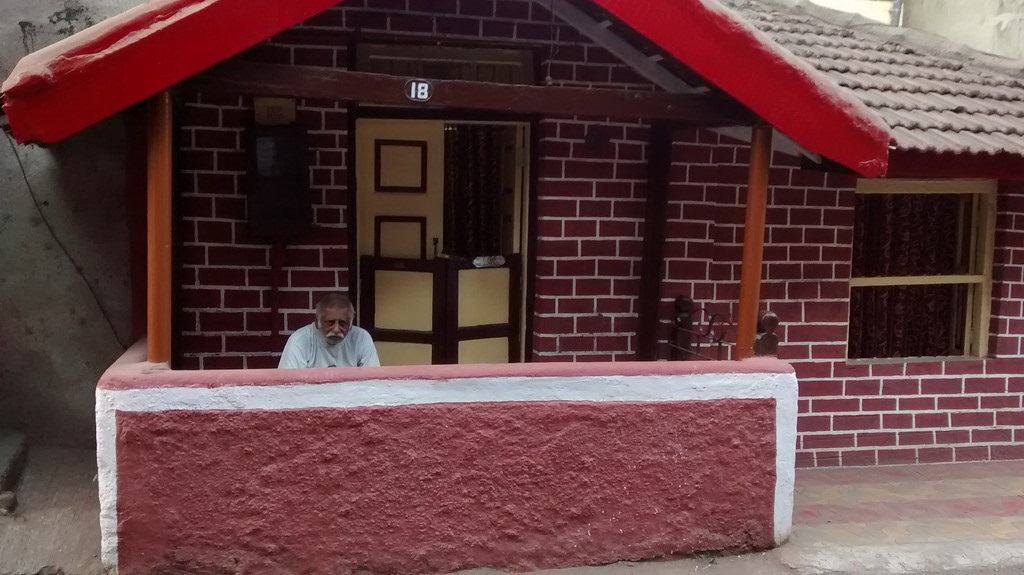 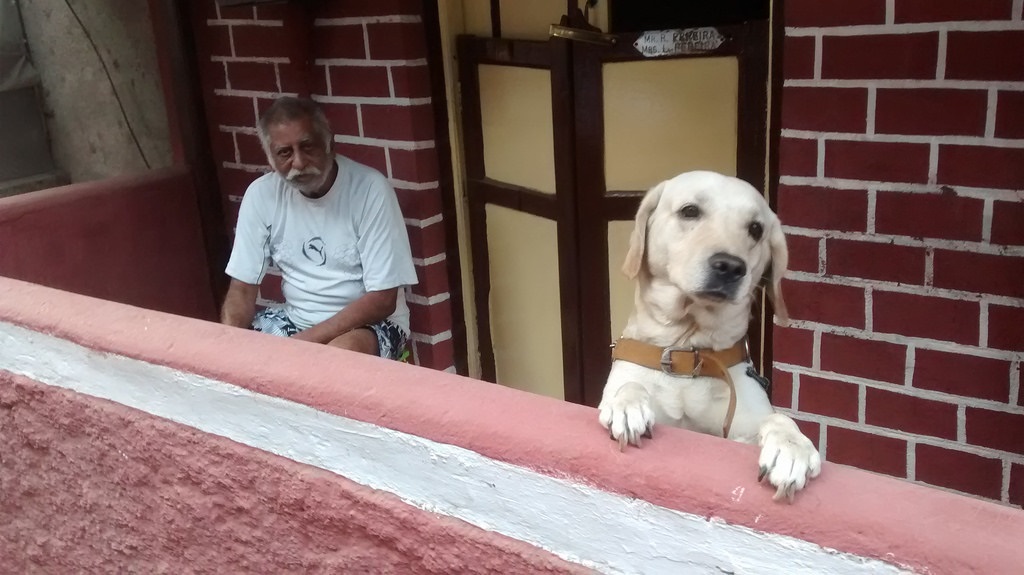 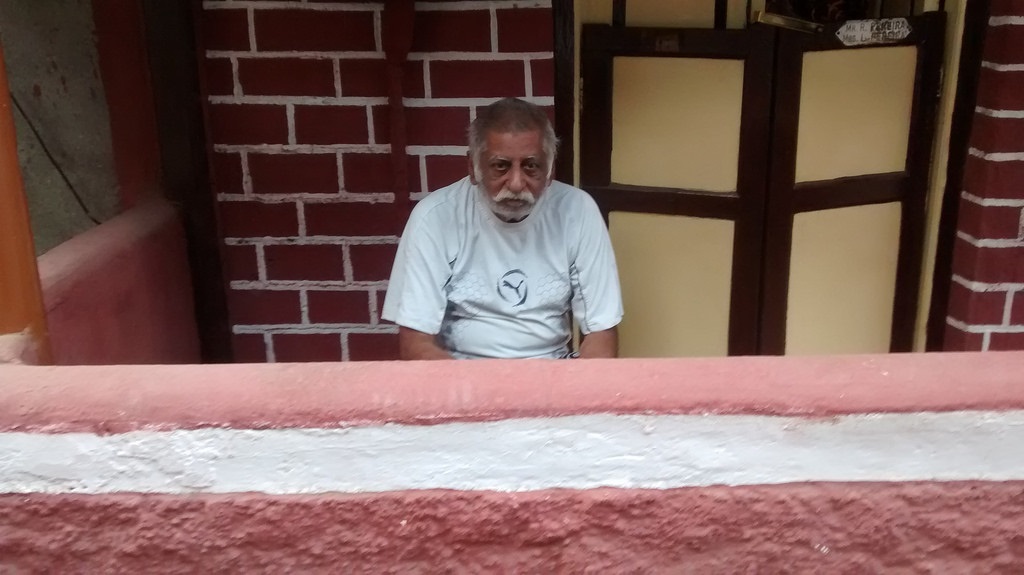 This bungalow on De monte street is unique and boasts of its East Indian Heritage .

I used to stay in this lane to early 90s after the riots .. this was one of the safest places because of the harmony of this rustic Bandra home to Muslims Christians Jains and Hindus ,,Bohras Shias Sunnis and Dalits too.

Rudolfs family is East Indian and living here in this Gaothan as East Indian fishing villages were called since 100 years.

He is a nice person and is always in the fore as volunteer of Agni , and is a social activist ,, fighting for everyone's rights.

I shot this while heading home from  Santacruz via Bandra Talao.

I shot this from the bus on Linking Road Khar .

And I know most of these women girls since they were toddlers , young kids growing up begging at Turner Road Traffic Signal Bandra .

They worked this signal for many years .. with their parents watching them like hawks and than came the big blow , they had to move from here as the powerful jewelry store lobby the restaurants at Waterfield road were being affected by their begging and their fights catcalls and they were forced to move I assume .

They shifted to the Pamposh Linking road signal and further towards the Khar MTNL Signal crossroads ..And as they had seen the hijras making lots of money at the Turner Road Signal when they were kids .. they began posing as Hijras and clapping their hands wearing garish make up and using the same hijra gestures they began working both these signals at Pamposh and Khar as their base , and the money came in as girls college kids are scared to death of Hijras .

And I am sure the cops see them too but than cops dont have the vision or foresight as Lord Shiva embedded in my camera lens .

And I am sure they must be giving a cut to the cops and the beggar mafia that must have come up with this brilliant idea .

And one of my earlier posts I met these girls and asked them why they had given up their womanhood and thy said as women they did not get money only drunks wanted to screw them and they got tired being mauled by the people in cars who would touch them inappropriately solicit them .. they told me they did not want to work as prostitutes and this hijra empowerment worked fine .

As I am a Hijra documentarist , I told them what if the hijras catch them and beat them up but these are tough women  who work in groups and I am sure they have the backing and clout of the beggar mafia.

And the reason I re sized this image is because at Flickr I find the largest number of hijra picture stealers that is why I have locked up my entire 20000 picture set on hijras , hijra poetry crossdressers and gay pride ..

And this I have posted that on a street like Linking Road the vibrancy of Linking road .. in Mumbai women have to become Hijras so as not to end up as prostitutes because they are beggars .. and it says a lot about how the new night life will have women working late nights at call centers running for cover from drunks and lechers and pedophiles .. for the hotel guys pub disco guys it is big bucks what about the ladies in the streets with their husbands ..

And why do they not legalize prostitution beats me ,, prostitution's happens openly under the cover of massage parlors and  even a few sleazy model coordinators operate as pimps ..and keeping a legal age so children are not forced into prostitution.

Anyway my blog was on hijra empowerment and I wish activists do something to make women even those posing as Hijras safe from the rapists molestors in Mumbai.

A Rainy Day In Bandra Bazar Road And Future Elections 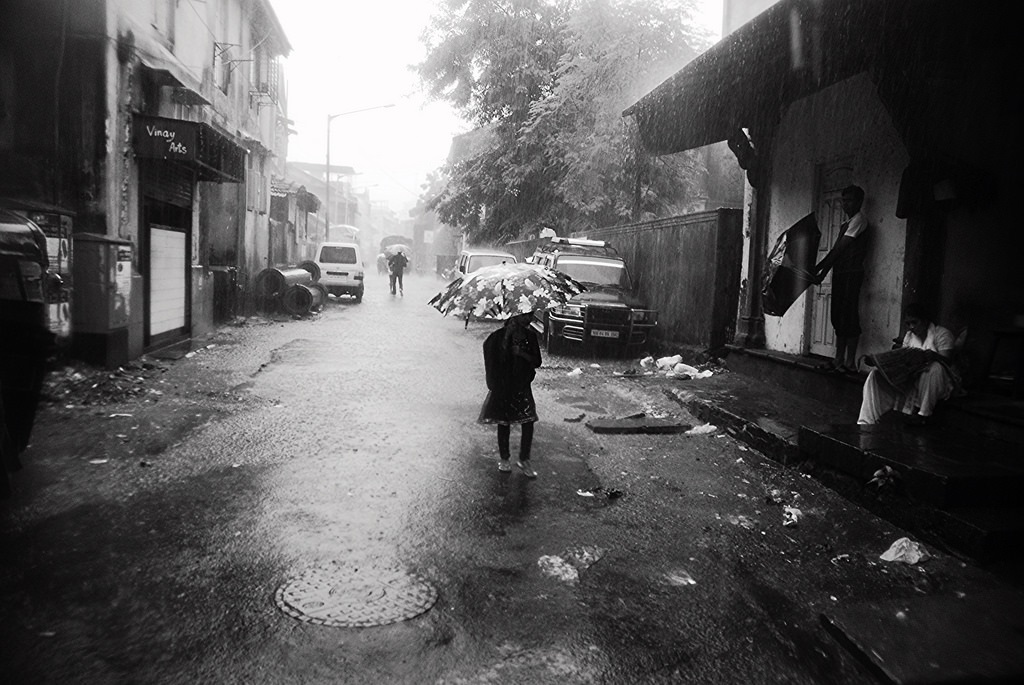 This is the Ram Mandir road of Bandra Bazar and next to this lane is a small bylane that leads to Bandra De Monte Street ..and if you walk straight up this Ram Mandir Road you will reach the Jain Mandir  known as the Jain Mandir Road that exits out at Bandra Hill Road .Even the De Monte Street exits out to Bandra Hill Road via Chinchpokli Road and Gonsalves Wadi.

And once upon a time all these exit lanes including Boran Road  used to get completely flooded in the rains and the Bazar would be flooded waist deep.. And I shot those pictures  many years back in my Bandra Bazar Road set on Flickr .

I have documented Bazar Road people I shot who disappeared , forgotten faces , and the election rally's both 2009 Loksabha including the Assembly .. I shot the Independence day the only time you got to see the Congress local representative ,,, and here I must mention during the elections the candidates folded hands visit your house pat your children s heads along with his chamchas and if he loses he will not be seen in your area at all be it the Congress folks I did not see Phiroze Palkhivala of Am Admi Party after he lost the elections .

If they win ..this is a tricky one they expect to be seen in the Victory procession , but in the five years they wont ever visit your house to thank you , they had time than no time now ,, it is done through brochures or pamphlets ,, now we will see them in 2019 .

We will perhaps see a new lot during the civic elections in 2017.

And speaking about the civic elections my biggest mistake and like me others was voting for the Congress candidate , he hardly comes in our area .. and we voted for him because of Ms Priya Dutt and Mr Baba Siddiqui.. we did not even bother to find out about his antecedents ,,..

That Bandra Bazar Road is a total mess is a virtual fact , everyone knows it but have no will to open their mouths  the only will they had this time was to reject the Congress alright ,, even the Muslim vote bank could not save them.. and I hope the BJP reads this too it is performance and not just Modi wave that will bring you back... please dont under estimate the power of the Public ,, you have to serve them and not become Masters of our Destiny..

And I look forward to the Am Admi Party as we need a good solid opposition.. for the sake of Bandra Mumbai and India.

Email ThisBlogThis!Share to TwitterShare to FacebookShare to Pinterest
Labels: A Rainy Day In Bandra Bazar Road And Future Elections

The Rag Pickers Of Bandra Reclamation.. 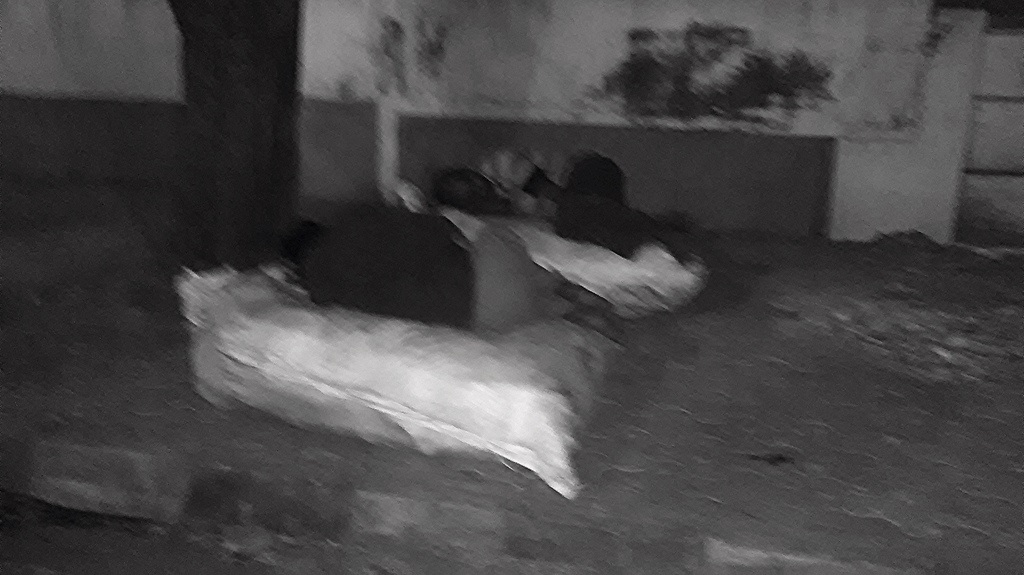 I see these guys almost every morning and presumably they are drug addicts  most of the rag pickers of Bandra are junkies and the only job they do is scavenging the garbage bins picking up  junk from the streets.

They work in the nights till early morning and being homeless they sleep on the sacks of the junk they have collected and mind you  it is quite cold in the mornings ..no bed sheet  no covering ..despite their junk habit they keep the streets clean a job that Bandra Municipality staff cant do efficiently and at times I think the Municipality of Greater Mumbai is anti Mumbai .. they hate the people they hate the city and they are doing a great job of destroying the city gradually and honestly some new civic infrastructure should come in place of the Municipality .. it is only interested in making a fast buck by hook or by crook..

Over the years perhaps two decade they have taken the public for a ride like the Congress and its time our Chief Minister Mr Dev Fadnavis does something about it ,,or Mumbai will be lost forever .. Night life will mean more corruption both by the cops and the Municipality ..

What has been done to rehabilitate the ragpickers  they work without gloves or masks but here the ragpickers work to keep up their habit .. they make about Rs 250 to Rs 300 a day.

And this morning I left my house at 5.22 reached the end of Bandra Reclamation at 5.40 I walked to the Met Gardens reached inside at 5.56 am took 10 rounds and did some free hand exercise at the Municipal playground next to th Met Gardens , the dirtiest , ugliest park in Bandra .

I wish Ms Poonam Mahajan and Advocate Ashish Shelar ,, see it too.. and this part of Bandra is the BJP Shivsena Vote Bank.

Beyond this are the slums the residents orphaned by the exit of Congress ,,,and much of the illegal shop extensions , illegal house extensions illegal housing are all found in this belt of Bandra Reclamation reaching as far as Nargis Dutt Nagar slums.

All open garbage are in this belt too .. Swach Bandra for you.

Email ThisBlogThis!Share to TwitterShare to FacebookShare to Pinterest
Labels: The Rag Pickers Of Bandra Reclamation.. 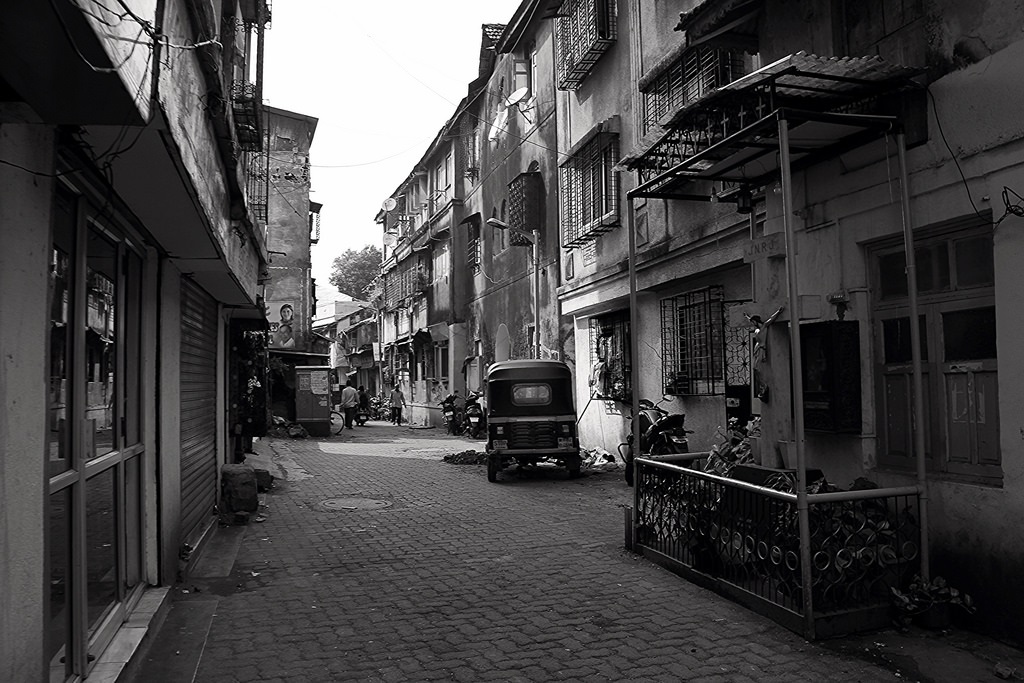 And The Bandra Talao ,,, Dying Fishes Weep..Waiting For An @Am Admi Sweep 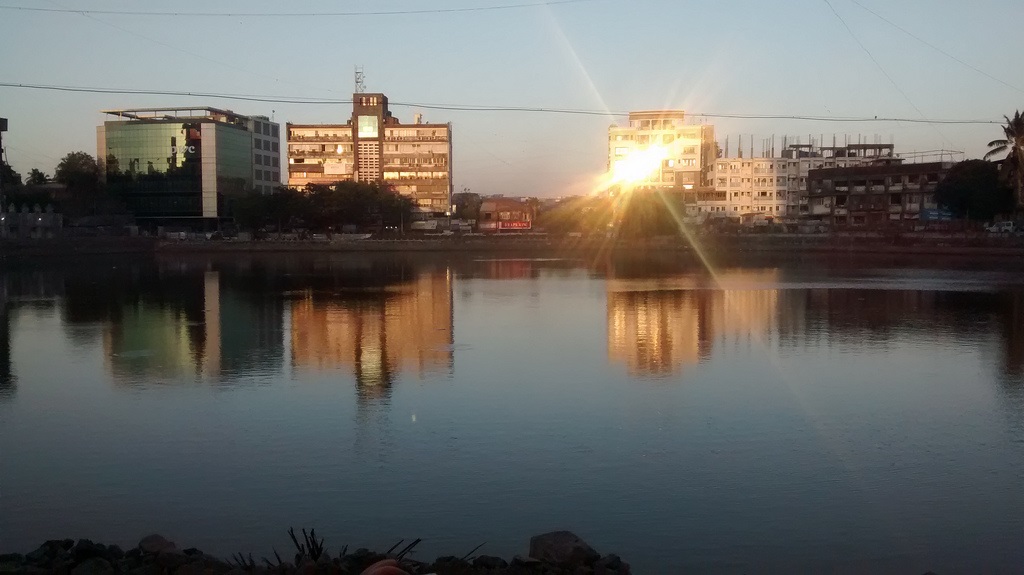 This Part Of The Bandra Talao Where Ragpickers Work 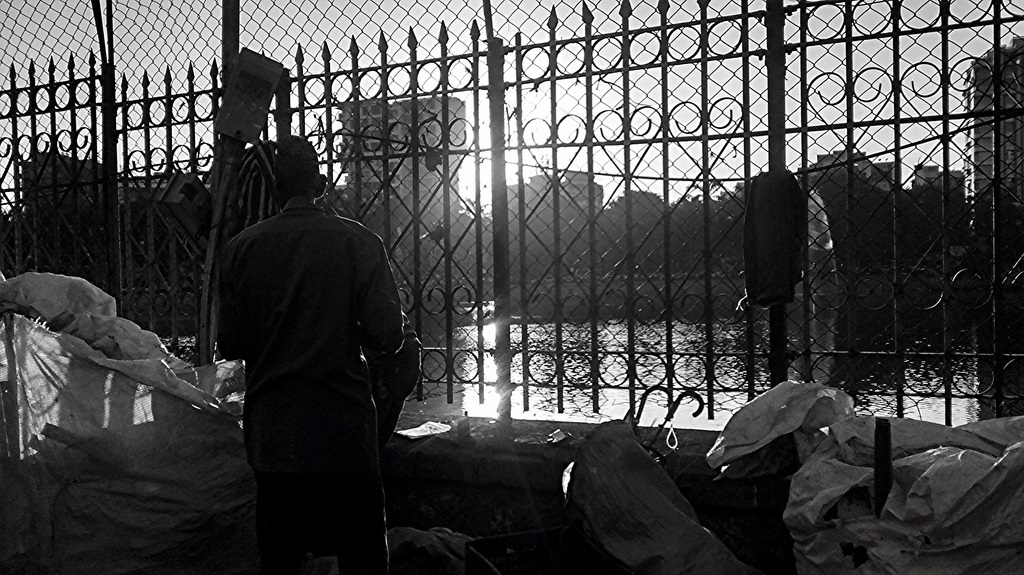 This is from the Bandra Station Road end and the path leads towards Bandra SV Road it is a very narrow path , mostly guys fish through the grill ..

Or you can fond some old guys feeding bread crumbs to the fish.

As for Fish I pity them in the dirty waters of the pond the slime that I shot a few days back I doubt if they could ever survive at this end.

I met one of the ear cleaners who works on my ears , he was grumbling he said he has been cleaning ears at the Bandra Talao for last 40 years and why is the Municipal official telling him to go back to the state from where he came .

He said defiantly even after the Bandra Talao reflection he will sit at the same spot ,,he was a very angry old man angry at being deprived of his means of earning Rs 20 for cleaning a pair of ears ..

I think we must the only country cleaning ears like this ,,

And I wondered about the pigeons they will be hit hard .. who will feed them where will they go and the man who sold pigeon feed and than bought two goats as people love feeding goats and people who feed animals birds fanatically religiously will not give a biscuit to a poor beggar child .

And I think now in retrospection I  would rather shoot Dabbawalas .. I too am getting tired of shooting beggar kids they have become passe to photographically cliched ,,

And it is strange as I shoot open gutters at Boran Road where the two senior beggars of Bandra sit Khwajah Bhai and Jaffar Bhai they look at me quizzically ,, .boh asked me in unison Bhai Sab Theek Hai meaning Brother are you OK
Simply because I was not shooting them I had passed them for two days minding my step at Boran Road , trying not to fall in one of the open gutters.

And here I must remind you all I had fallen in a manhole during the rains many years ago at Chinchpokli road with my camera , the news was flashed in Mumbai Mirror ,, Beggar Poet Gone Down The Drain.

But I survived and so did my camera  and this was during a stormy flooded day at Bandra .