My Next Series Is 11 Moharam at Dargah Hazrat Abbas Lucknow 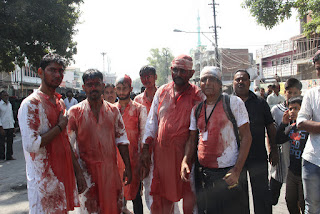 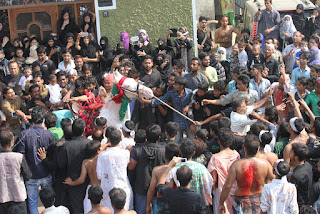 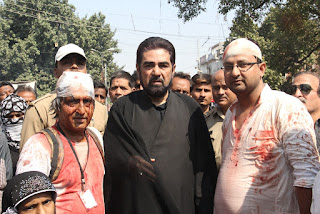 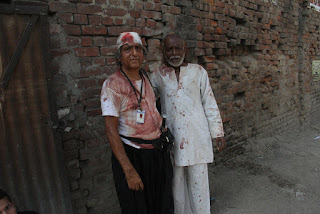 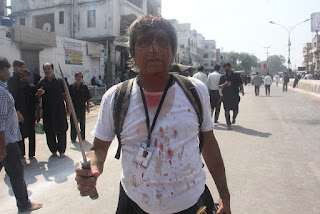 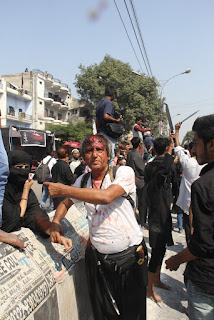 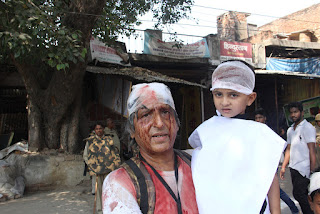 I normally arrive in any city to shoot Moharam on 7 Moharam and than return on the day after Ashura , and I was totally caught up in a work that I had taken before Moharam of a very dear friend and I was committed to him he was leaving the country ,, so I planned my Moharam journey after I delivered his clothes and Javed of Kalpana Travels Bazar Road got me tickets in a reserved non AC compartment to and fro so I left on 22 Oct and returned two days after Ashura as I was aware of the two iconic juloos this at Hazrat Abbas Dargah and the other also on 11 Moharam at Muftiganj Meeransabs Imambargah .
This Lucknow trip I was lucky to befriend my father in laws nephew Salman Qazilbash who shot my kama matam video.. and who accompanied to both these 11 Moharam shoots .. and without him it would have not been possible I had eaten some train food and on reaching Lucknow I had a severe bug... and it was irritating me badly on 11 Moharam.. it was a very harrowing experience after I had shot Meeran Sabs Juloos ,,
My kama wounds heal in 2 days though I am a diabetic and strangely a normal wound on my leg will pester me for months and I walk barefeet during all these Moharam shoots .
This time as mentioned earlier I shot a lot of videos though I hope to learn video editing so all my videos are raw as is where is stuff .. with noise with the fragrance of rosewater and blood and the thirst of the parched earth under my barefeet .
And this is Lucknow Azadari shot by a beggar poet , a man who lives with beggars fakirs malangs and a photo blogger this is certainly not a media shoot .. I could never be a Khat Khat Khat a Khat shooting photographer ,,
And I shoot lengthy story boards this time I have included my street shots my other shots like the British Residency too in my Ashura in Lucknow set at Flickr and I began my train journey blessed by the Hijras in the trains and when I told them I was going to shoot Moharam one of them gave me Rs 51 to put it at the Roza of Dargah Hazrat Abbas ,, she was from Lucknow too and I had tears in my eyes ,, I cannot change another mans destiny .. but if she wants to be treated as a woman I respect her decision and her choice ,, on my return too I was again met by the Hijras on the train but most of them know I am a Malang and respect me ,, as I respect them too.. these pictures are not for public view ,,
So in short this is my spiritual trek.. this is not some spiel on blogging .. this is about original content for me without original content pictures or thought blogging would be water on ducks wet ass .. so I kept away from congregational blogging tours ,, that earn you nothing that you never knew ,,
With 357000 original blogs shot in humility of all religion of India my mother country what lessons can I learn from erstwhile Tech bloggers ,,I began blogging in 2004 ,, and sometimes just a single frame is worth a million thoughts and words .
Not Christian or Jew or Muslim, not Hindu
Buddhist, sufi, or zen. Not any religion
or cultural system. I am not from the East
or the West, not out of the ocean or up
from the ground, not natural or ethereal, not
composed of elements at all. I do not exist,
am not an entity in this world or in the next,
did not descend from Adam and Eve or any
origin story. My place is placeless, a trace
of the traceless. Neither body or soul.
I belong to the beloved, have seen the two
worlds as one and that one call to and know,
first, last, outer, inner, only that
breath breathing human being.
Jalaluddin Rumi