The Bandra Street Barber Dreams Of Elusive Acche Din Like Me 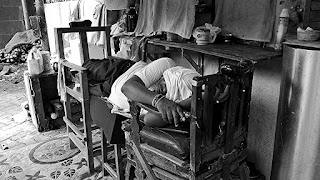 As an incorrigible trespasser into peoples private life , using the excuse of being a prolific street photographer I try to capture the inner pain of people in my backyard ,,poor people , street professionals and I have a few favorite ones ,, Beggars , but I prefer to shoot the decisive pain of the Muslim community , a community that God chose for me to be born into ,,and he chose a Shia Mothers womb.. her first child my first mother.

Next I shoot homeless there are many have homes lavish living and are still homeless I shoot those that are absolutely homeless , pavement dwellers , street urchins ,,

I shoot Dabbawalas I will stop them make them get off from their cycles take a shot , I am deliriously shooting Dabbwalas and most of them know me as I shot the Dabbawalas  during Anna Hazares India Against Corruption at Azad Maidan now a failed dream ..India lives breathes corruption their is no escaping it virtually or even cosmically ..

I shoot the Whippers Hindu devotees of Ma Ambe and some know me as I have used their whip to punish myself for my pictorial transgressions .

The Hijras I dont think with humblest humility anyone has ever shot Hijra as humanly or passionately like me ,, I had hijras who wanted me to shoot them nude or in copulation I politely refused I shot them as the marginalized and victims of homophobic hate since time began and with the advent of the Hermaphrodite ..I shot their androgynous angst this documentary with rare pictures has been disabled from public view. I shot cross dressers too..

I shot barbers , and I really shot barbers from  Walkeshwar Banganga till the banks of the Ganges in Allahabad , I shot the barbers religious tonsure ,,I have not as yet shot the barber doing circumcision or Khatna . I will shoot it one day ,, if I get a male grandchild ..

I shot Sufi Monks , Malangs and Rafaees and now that I am a Malang  it has become much easier , but I have to go to Makanpur .. and I need money for  such trips as I dont sell my pictures , and photography according to my wife is a waste of time for me it is only a Hobby,

I shoot Naga Sadhus and other Sadus and for that I wait for the Kumbh at Nasik I have already shot them at the Maha Kumbh.

I shoot sleeping dogs , drug addicts drunks and born losers I was one myself...

I shoot Faith .. I shoot Beliefs I shoot Culture I shoot Rituals and I hope to shoot the bullockcart race once they are legalized and the Battis Shirala snake festival.

I have not shot Koovagam Eunuch festival Lord Iravan has not yet invited me so to speak.

I have my closest friends in Pushkar but I have not shot the Camel Fair ,, I shoot Ajmer during the Urus thus shoot Pushkar too.

I am a high end tailor by profession I hardly get time to leave Mumbai so I shoot the streets to save my cosmic camera from getting rusty and worn out ..

I blog with original content .. I would die if I didn't..

So in short all those I   shot and those I dont shoot are all waiting for Acche Din Good Days .. even me ,,

And I have decided and solemnly promised to keep away from American lady photographers ,,who dont know the difference between a good friend and a tourist guide .

Now I wont ever drive Miss Daisy ..even if she is Crazy

Email ThisBlogThis!Share to TwitterShare to FacebookShare to Pinterest
Labels: The Bandra Street Barber Dreams Of Elusive Acche Din Like Me

Does Anyone See Pictures Of Poor People Like Us ,, He Said To Me Politely 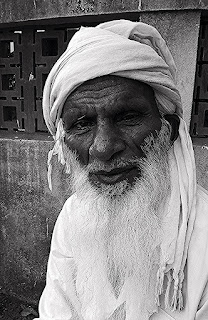 I meet him every morning when I finish my walk at MET Gardens ,, I normally walk down from home at Bandra Reclamation shooting pictures on my mobile phone ,, earlier I used an Android now I use a Windows phone ..my son got it as a replacement for the faulty disastrous Xiaomi Note from Flipkart for me .

I reach the MET Gardens at 7.30 am walk for about 45 minutes than some free hand at the Municipal park we call Local Gym..


When I am heading home I sit and talk to this banana seller migrant from Banaras ... he is counting the days he will go home in June .

I shoot his pictures and he wonders , stupefied , that do people really have time to see pictures of poor people like him than I tell him politely  I shoot pictures for myself..I tell him he has a nice face that etched on his face are multiple  lines  of his hardships sufferings crowned by a smile that is positive and alluring ,, to me mostly .  He thinks I am merely flattering him , but I assure him I am dead serious about my estimation and than he is shocked as I ask him to come home have lunch with me one-day.. home cooked food made by my wife .. I did not tell him that I want my granddaughters Marziya and Nerjis to shoot him too ... there is a dearth of kind faces filled with warmth on the streets ,, Faces on the streets of late have become hard , hopeless and negative ,, and its not just because Acche Din good days have not come after almost an year ,,

So he is a person I end up shooting every morning and next the old Muslim gentleman reading the newspaper outside the Sunni Mosque Bandra Bazar ,I greeted him this morning we meet everyday ,, and I asked him his name , he is Abdul Ahad Bhai, he asked my name I told him ..I told him where I stay and he gave me a nice smile ,,You are also known by the house where you stay ,, I stay in a simple humble abode famous for a political celebrity.

After I move away , I walk through the once Beef Market now Buffalo Meat Market via the Bazar and than I spot the garbage truck I immediately start shooting a video.. I have to shoot the pathetic condition of work of the Bandra Municipal Conservancy staff the bad state of the garbage bins , no wheels, and as  drug addicts drunkards sit her at this garbage dump it is a real eyesore .

There are people who cant bear the stench , these guys light a fire in the bins ,so one of the bins is totally burnt out ,,and Bandra Municipality cant afford good aesthetic bins colorfully painted , or safety shoes masks gloves for their conservancy staff,,I must be the only crazy guy in Bandra shooting them ..so every garbage truck that sees me waves out to me ,, they watch my videos on You Tube . I hope the Bada Saabs of Bandra Municipality watch it too..

So this is a typically Happy Morning for me ...in Bandra .

I miss my grandkids all three on vacation...

Email ThisBlogThis!Share to TwitterShare to FacebookShare to Pinterest
Labels: Does Anyone See Pictures Of Poor People Like Us, He Said To Me Politely
Newer Posts Older Posts Home
Subscribe to: Posts (Atom)