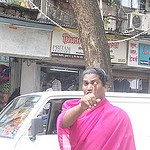 My hijra set is marked Forbidden to Public by me ,,

I have to say without sounding pompous or boastful no one can or will ever shoot the Hijra like I have ,, simply because it is question of Trust .

And above all I am a monk Malang , so I have not miused my hijra pictures or ever written bad stuff about them . I wanted society to accept them and give them space let them live the way they want to live instead of being caged as women in their biologically male bodies .

20000 images I shot over the years poeticized their pain , as  I met them,  my Guru called it the Hijra Vardan.. Hijra blessings  because a clean spirit searches clean human souls .

I was returning from Dadar via Nandi Gully Bandra and I shot her on my new 55 250 mm lens she warned me  but I shot her walked up to her told her about my Hijra connection.

And I meet them wherever I go sometimes I shoot them sometimes I let them free without capturing their androgynous soul in my camera.


And Yahoo Copyright is a monolithic group of nasty people that do nothing but make you go round in circles with uncalled for legalese .. I hope Ms Marissa Mayer at least reads this and takes a positive stance on peoples whose pictures are stolen at Flickr because of a useless tool called Spaceball.. even a three year old child of a hacker could hack into your entire photo stream,

I met a foreigner  at the Maha Kumbh who showed an interest in buying my entire Hijra lot I told him every penny cent I will give to the poor needy beyond caste color or creed ..but than after the Kumbh I never heard from him.

The sad part is I shoot the Hijra transgender documentary but people see it as voyeurs , for massaging their languishing libidos .. and the Indian repressed male would even screw a tree if he found a hole in it..

My grand kids have shot the Hijras and one of them can sop them from a mile away ..


Nobody shoots the Hijra the way I have it is called .. Hijra Vardan either you have it or dont ,,

Email ThisBlogThis!Share to TwitterShare to FacebookShare to Pinterest
Labels: My Tryst With Hijras Is Linked To The Soul Of My Cosmic Poetry
Newer Posts Older Posts Home
Subscribe to: Posts (Atom)