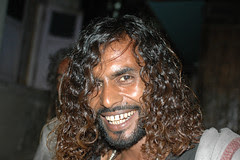 Farukh Baba is another stylish , dynamic Sufi Rafaee, hs movements are as speedy as Don Jaun Baba .Both together are fluid in their movements, Farukh Baba uses a steel pointed toy with chains , to penetrate his eye balls..
I love shooting pictures of both these photogenic and graceful bawas 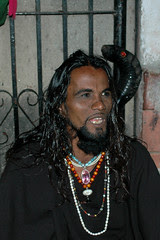 Earlier he did not like me taking his pictures , and kept away from me, but later he was admonished by Handi the head of the Chancawalli Rafaees , and we became friends .His real name is Hassan Baba , he is a martial arts exponent his movements with the sword faster than the speed of a bullet .The only regret he has that the swords he uses in his native place in Rajasthan, he cannot bring them to Mumbai because of police restrictions.
Much of the pictures I shot of his body piercing get badly out of focus.
He uses two curved swords to penetrate his eye balls, and the balls almost out of their respective sockets..
He and Farukh Baba are from the same Rafaee clan.
This picture was shot last night , the final day of their Sandal.
Now these Chancawalli Rafaees will move out from Makhdoom Shah Babas Holy Shrine to that of Fakhruddin Shah Baba on the main Mahim Road .
The Holy Fire will be set here for 3 days known as the Dhuni.