The Naga Sadhus And The Cops ,, Was Just Waiting To Happen 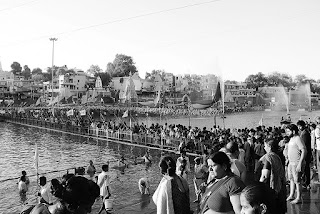 Since this time there was a spate of robberies at the variou Akharas on our stretch at Bhuki Mata Road ,,,and the poor cops stressed out by the overwhelming crowds were clueless about the same ,, there were several meetings of the Naga Sadhus and my Naga Guru was privy to some but the robberies did not stop..

The anger got worse when the car of a Maha Mandleshwar was broken by the thieves ..they cut open the glass window decamped with Rs 30000 I was told by my Guru ,,, this was the last straw .. and professional thieves were at work for sure ,, there was hardly any investigation ,,, the Akharas stood on flattened fields there was no security ,, the only security was at the huge opulent tents of the Godmen .

The modus operandi in some cases the Nagas told me was ..entering the tents with the intention of using their toilet or as their devotees and robbing them.. much of the robberies happened when the Nagas left for the Shahi Snan and the few devotees that remained back could not stop the robberies .

The Naga Sadhus are volatile short tempered when provoked and this is not an excuse but law and order at the Ujjain Kumbh was not upto the mark...I was there and I saw it and there was hardly any surveillance to speak of... the largest crowds passed Bhuki Mata Road and there was no public toilet on this stretch...

When we came back from the first Shahi Snan at our Akhara my Gurus Guru had a lady Naga Sanyasin posted at the gate ..she was very strict a stick in hand she would not allow strangers to enter our dwellings ,, and in the night the gates were closed with cloth curtains ,,, lol... you could squeeze in from below and no one would know.

The only sense of fear were the huge hoardings of the CM on the roads but that certainly did not stop the robbers from looting the Naga Sahus or the pilgrims .

And this is my fourth Kumbh not only as a photographer but we are pretty bad in management of the same ,,,and this event is something too huge to be compared to the Commonwealth Games ,,, we have hardly any dissaster management that works ,,,

These are some of my humble personal views ,,, as an aftermath of what is happening at the Samistha Ujjain Kumbh 2016.

On the other hand the only Akhara with robust security , bouncers a Media center well organized well planned .. with CCTVs was the Kinnar or Hijra Akhara under Guru Laxmi Narayan Tripathi.. you simply cant enter the space where they live as it was heavily guarded ,,,

Being her oldest disciple I had to go through three layers of security before I could meet her with my photographer friends from France .