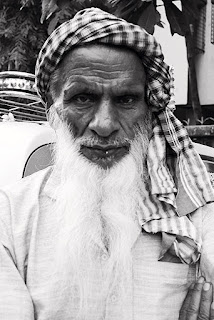 I met him recently a year back ever since I started coming to Bandra Reclamation to play tennis under Coach Surendra Pawar .
I  liked him selling bananas and his humble disposition courteous manners endearing nature  and than when his banana cart was confiscated by the Municipality and he was forced to sell the bananas on a stool I felt sorry for him he never complained he simply said Allah ki Marzi hai Its Gods Will.

And he never understood why I made him pose to shoot his pictures ..I told him I liked the humility of his face but to keep me happy he never refused me and soon became on of my iconic street models ,,

Last June he was to go to his hometown to get his only daughter married and his dreams got marred as the man his trusted friend who kept his earnings for safekeeping ,, left Mumbai without informing him.. and he was shattered as his friends phone was out of reach,, and he looked desperate I offered to help him  with a contribution I told him he could pay me back once he got his savings back from his friend ,, but he politely refused ..

I think this was the only time I saw him really sad disillusioned though I told him he should have kept his savings in a bank.. he lives in the slums and is uneducated .. they trust friends more than banks ,,

However I found him smiling  two weeks later his friend had contacted him he had left Mumbai as his son had met with a serious accident and was returning ,, he got his money he left to get his daughter married and I missed him though his brother a bearded guy who looks like him took his place selling bananas .. he had got a new cart too.

I shot his brother too.. and waited for my good friend to return , he returned recently after a long stay ..his daughter he told me was happily married and wished me for supporting her dad .. I than told him I had a daughter too I miss her a lot as she lives in Delhi and though we dont get along as much but we do love each other ,,

Most of my tennis mates buy bananas from him and I buy him a Bisleri bottle once in a while ,, he met my granddaughters Nerjis and Marziya and was astonished when they held my camera to shoot him..

I also shoot an old frail cobbler who sits in a box like cubicle ,, a Dalit cobbler and a Muslim banana seller ,,,both protagonists of my street stories both fodder for my camera and my street thoughts.. and all under the ambit of my down to earth street photography , my prolific Bandra Blogs ,

I taught the banana seller how to tie his scarf on his head to save him from the hot sun.. so now wears it this way ..adding more to his face and character .

Not everybody is as congenial cordial like him.. I mean the Muslim lobanwala beggar who abuses people could learn a thing or two from this kind banana seller of Bandra REclamation.

Happy morning from Bandra ,,I am too tired out to go for a walk and tennis courts are closed for us on Sundays .