The Guru is The Path That Leads You To Your Destination 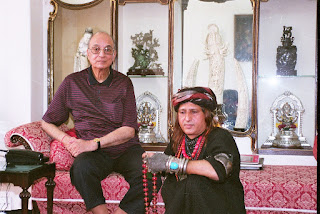 Late Mr KG Maheshwari began his morning chore one of them was his call to me and he would inquire about my health my diabetes and next he would inquire about my granddaughter Marziya ..he wanted me to bring her to Maheshwari house one day but that never happened .
It was late Prof BW Jatkar who introduced me to Maheshwariji at my camera club Photographic Society of India Mumbai.
We three were a kind of trinity as we jointly posted our entrys to national international salon.. I was a newbie between these two stalwarts a bot of their understanding of photography and a lot of their humility did rub of on me ,,,I never aspired to shoot like them it was like a sparrow trying to fly with falcons ,,,my style of point and shoot on a DSLR was different from their Art of Pre Mediated composing and reading understanding of light .
I simply shot with my eyes closed ..this is a powerful mystical metaphor I felt there was a genie in the camera with every shot he captured you ,, later I was given to understand it was the Third eye of Shiva that formulated your vision and photography most of all I was told not all photographers have the third eye of Shiva .
I do not like studio photography but gracefully became a model for my Guru Maheshwariji at his house ..my guru used a single light used bedsheets as reflectors a 50 yar old tripod and twin reflex lens medium format Mamiya 330 .
He would talk of the old masters founders of PSI anecdotes , his interaction with Mahatma Gandhiji who lived at Birla House ..my Guru was the son in law of the Birlas , he talked about Quit India movement he talked and I listened he was totally dependent on his beautiful wife his Marg darshan his crutch of life ..she was like a shadow that loomed nurtured his creativity .
Despite his poor health vertigo he came to my fashion studio I felicitated him he came to my son Asifs wedding ..we went to most events together Photofair or functions at our camera club.
He used to tell me if he Google searched KG Maheshwari it turned up with all my posts ..because I loved him immensely I was not worthy to be his disciple but I touched his feet and accepted him as my main Guru of photography .
He knew my genre was street photography religious feasts and occult ..but he never forced his views on me .
When he died I cried like a man who has lost everything ,,I collapsed such was the intensity of a pain I was wailing like a madman.
I miss his calls I miss his voice I was shattered by the loss of this great Guru and there will never be a Guru like him..
That he told his son Kamalbabu that I was a good perceptive street photographer is his blessings to me and my art as a photographer and as a poet .
This picture was shot by another great photographer Bhupesh C Little.
So every picture has a story but every story does not become picture perfect.
I must let you into a secret it is only Facebook or Twitter that make me voluptuously vocal adding depth to my fragmented creativity of shadowboxing with the restlessness of life and despair.
By Firoze Shakir Photographer No1 - September 23, 2017