The Drunken Hijra Of Bandra Will Soon Die Of Spurious Hooch 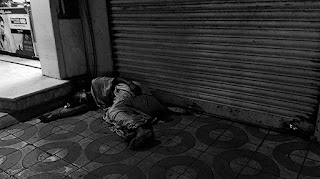 He begs at the Bandra Lucky Hotel Signal SV Road
heavily drunk his legs unable to take his weigh badly
floored his future perhaps sudden instantaneous death
is what might be in store old bedraggled ugly he has lost
his youth that he could have whored...on his head unwittingly
hangs a double edge sword..sometimes while he is drunk
the drugaddicts steal his money hidden within his saree fold
will the spurious hooch sellers hang for murder what about the cops who had their hands in the pot of gold will they go scott free a thought unfolds ,,you banned beef great now why dont you ban those illicit booze addas where this poison is sold  or it is political necessity that has you your government in a vicious hold.when a poor man dies heavens cry i am told  distraught families with your measly compensation left out in the cold

Some Stories Go On Without Ending

I used to shoot him and his ward a blind boy ..I documented this blind boy with damaged eye balls but a very pleasant smile and this old man accompanied the blind boy ,, the boy was 9 year old
Some people had tried to get his eyes operated but the attempt was a failure and both blind boy and this old man disappeared ,,I saw them again at Bandra Bazar after 6 years I again began shooting them.. and this entire documentary is a set at Flickr ,, Blind Boy of Bandra .
Another attempt was made to get him get back his eyesight and again both blindboy and the old man disappeared .
And now the old man begs on his own I inquired about the blind boy but he gives me evasive answers ..I shot him near the Sunni Mosque Bandra Bazar and again asked him about the blindboy he said he is back home , that is Murshidabad in W Bengal..
And even today people give him money in memory of the blind beggar boy of Bandra
By Firoze Shakir Photographer No1 - July 16, 2015

“What has he found who has lost God? And what has he lost who has found God?” ― Ibn 'Ata' Allah Al-Iskandari 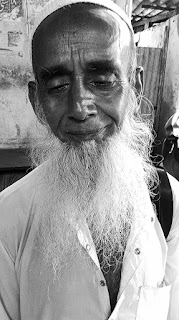 “Suffering is a gift. In it is hidden mercy.” Rumi 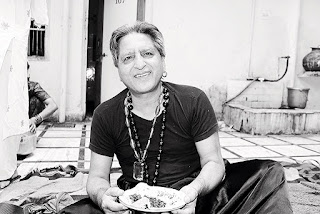 This picture was shot at Moti Katla ,,and I was invited by a transgender to meet a new eunuch child Mahi , a very sweet boy about 8 or 9 year old , he was going to become a hijra .. because he was born a hermaphrodite , he was happy among this group , and they treated him as one of their own , pampering him like a living doll , and he was fascinated with my camera I shot a lot of pictures, he was a unique case , I had shot a lot of eunuch children , but there was sadness glistening like rivulets in his eyes he trusted me and I was not in my usual sartorial self,, because of the Ajmer heat and this was the Urus of 2012 , I had shot over 2900 pictures a vast tapestry ,,,Malangs Rafaees Street and the Hijras..
And now I am revisiting this set after 3 years , trying recover wisdom from lost moments lost time ,, I am seeing my pictures differently .
I spent most of my time before Chatti documenting the transgender sadly I regret I should have shot videos , but I had no passion for video I was a single frame traditionalist I told my story through a single frame and let it run with other pictures as a story board.
I dont think in all humility anyone has shot the hijra as closely without corrupting their humanity or their womanly sensuality ,, I saw them as broken dolls seeking help .. trying to touch a core that sadly does not exist in modern man of Indian origin..
In short I shot their sufferings as a poet and as sensitively as I could and than decided one day to lock up this entire gamut of rich human feelings of men posing as woman their anomalous androgynous nature ,, 20000 images ,, I shut them and only shot for myself, I shot the transgender in trains bullying passengers , showing their genitalia extorting money , I shot them soliciting in the red light areas called cages of Mumbai ,, I shot them in their budoirs I shot them almost everywhere in utmost decency ,,
I shot the rooms where they worked in inhuman conditions , and felt sorry that they live worse than animals ,,
I shot transgender that had made a name as hairdressers , make up artists , entrepreneurs bardancers , scholars , shamans , exorcists and courtesans mujra dancers ,,hijra peformers at Musllm weddings in the slums , ,, my pictures were not for voyeurism , titillation or masturbation ,,,because I shot their raw dichotomous sexuality Ying and Yang.
And this picture was shot by a hIjras as I sat for Niyaz with them.. food offerings in memory of the Holy Saint of Ajmer and I sat with the beggars and ate the Niyaz... yes I too am a beggar ,,in the eyes of a richer beggar than me .
By Firoze Shakir Photographer No1 - July 16, 2015