The Ego is a veil between humans and God’.” “In prayer all are equal. Rumi 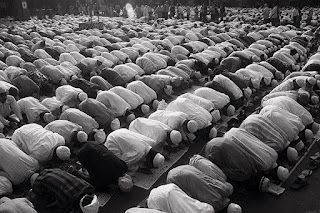 Documenting The Humility Of The Barbers Of India 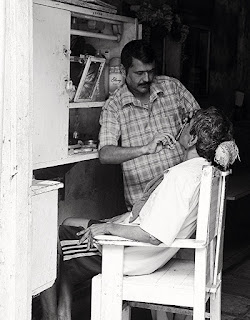 I shoot a lot of street stories , I shoot them as pictures , I try not to add words but than a circle of overseas Flickr friends ,,,would be deprived of the richness and the wonderful fabric of Indias dreamers ,, so I add my few bits as prose or poetry ,,

I have been mostly shooting street barbers , hajams moving about with their tin box of tools and most of this segment of barbers in Bandra know me very well.. simply because I shoot them , some get annoyed while I shoot them working but others are more forgiving ,,

My minds eye spots barbers faster than my mythical cosmic camera , and without hesitation I shoot a few frames .

As you all know the largest gathering of barbers in Mumbai happens during the Pitru Paksha festival at Banganga ,, I never miss it ,,
The next place I liked shooting barbers was Allahabad on the banks of the Ganges during Maha Kumbh..religious tonsure is what I really like to shoot ..

There is a lot of religious tonsure at some Sufi dargahs that are visited by the Hindus like Haji Malang ,, where the devotee offers his shaved head as obeisance to the Holy Saint ,,a strand of hair goes to the Shrine ,,


The few saloon stalls I shoot , close to my house , but the most prolific are the street barbers of Lal Mitti Bandra Reclamation.. predominantly most of the barbers are migrants from North India Uttar Pradesh. 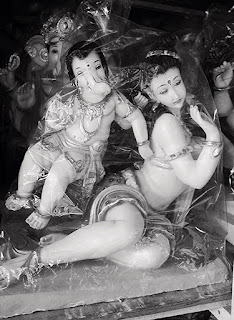 I salute that remover of obstacles,
Who has modakas in his hand
Who always bestows salvation
Who wears a part of moon on his head
Who protects this world which is varied,
Who is the leader of those who cannot be lead,
Who is the cause of destruction of asuras,
And who destroys all things which are not good.

I bow to that Ganapati who shines like the Sun,
Who bestows peace to all the worlds,
Who removed the Gajamukhasura from this world,
Who has a very big paunch,
Who has an elephant-face which blesses,
And who is the one who shows kindness
Who is tolerant
Who is full of blessing,
And who showers great fame,
To those who salute Him.

I salute the very ancient elephant-god
Who destroys the wants of the have nots,
Who has been worshipped since ancient times,
Who is the eldest son of the lord who destroyed cities,
Who eats away the pride of the enemies of the gods,
Who is awesome at the time of final deluge,
Who wears serpents like Dananjaya as ornaments,
And who is fierce like the elephant in rut.

I always meditate only on that God with single tusk,,
Who is ever lustrous tusk is very pretty,
Who is the son of Lord who killed the god of death,
Who has a form beyond ones imagination,
Who is endless,
Who tears asunder all obstacles,
And who dwells forever in the heart of Yogis ,
Like the season of spring.

He, who remembers with respect every morning,
These five gems of the great Lord Ganapati,
And who meditates in his heart the leader of ganas,
Will soon be blessed with a healthy life,
Free of all problems, endowed with great peace
Great sons, longevity and spiritual and physical wealth.
By Firoze Shakir Photographer No1 - December 02, 2015