The Alluring World of Hijras OF india

The Humility And Hospitality Of Narayan From Khamakhya 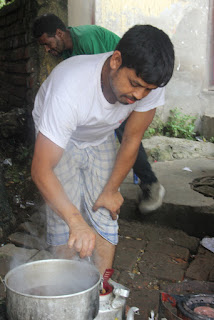 Even with all my future pending uploads on Khamakhya trip.. if I did not tell you something about Narayan the  tea man on the Khamahkya Temple road,,I would be lacking in good manners and breeding .

After I got a place to stay at a Ashram I found there was no toilet facilities at all ,, the toilet was into the jungles passing Narayans tea stall with a bottle of water in hand ,,,and it was tough to say the least,,, there was a newly built toilet but the Guwahati Municipality had locked it up as there was no water since 20 June .

Even after the fair started on 22 June it was still the same ,, I tweeted a picture of the toilet tagging modiji and rajnathji... but than nobody responded simply because I am not part of Modijis army of Trolls on Twitter ...perhaps they get a faster hearing.

Well the next time I was carrying my water bottle for natures call Narayan the tea guy we had become good friends .. called me aside and told me I could use his toilet ,, I asked him if I could pay him something ... al he said no money just pray for my family ,,

And I used to have red Assamese sugar tea cause of my lg injury worsening he began making black sugarless tea for me ,His wife and his 3 Kids Vishal Deb and Gun Gun loved me ..

I spnt most of my time with the Aghoris at the creamation grounds or sitting at Narayans tea stall.'.

It was only when I was leaving  Khamakhya Narayan told me that the tea business was for the fair ... he was actually a photographer working in a studio,

I was very surprised and happy too.. Narayan and his wife and children have never seen Mumbai but hope to see it oneday,, like I was seeing Assam first time in 65 years .

Now I come to photography every picture has a story and you can talk about it as a blog ,, as I have renounced myself completely from blogging ,, I call it storytelling .