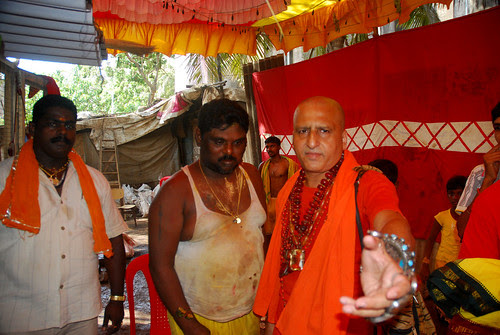 I start a new series at Flickr - Maryamma Feast at Macchimar Colny also known as Fishermans Colony Mahim.24 May 2009.
I was invited here by Laxmi the sister of the High Prest of this temple.. that is worshiped by the Tamils and the local Maharashtrians too.
The rod piercing is done by the Marathi Manoos , and the guy who who pierces his back with hooks is a Marathi boy and he pulled a car..

I reached the temple and found Davendar Bhima of Nehru Nagar Juhu waiting for me, he helps in the piercing too, though much of the work is done by Raja.

From the Temple the procession moved to Mahim beachfront and the road was a burning furnace at 3.30 pm, I was barefeet, here there was a puja , the Goddess enters the body of the High priest and his brother in law.

The piercings took place and once again I captured my favorite young Sairam.., young Anamika who pierced her tongue with a Trishul..this she shall do for another 3 years , as she took a vow when her mother was seriously ill.

She too goes in a trance..

For the first time since I shot this festival , I met Hijras from Mulund, co incidentally one of them was called Anamika too.. I shot a lot of pictures of her and her friend.

From the Mahim beach the procession passed St MichaelsChurch Mahim, towards Mori Road , back to the Temple ..I was in bad shape I had shot a 4.50 GB card , I hopped in a cab reached home at 9 pm.

I did not shoot the removal of the rods or the hooks..I had missed it last year too..This time because of some road work at the main Mahim road they had to take a very long route..even the participants were having a bad time..

In the picture on the left Davendar Bhima, the High Priest of the Maryamma Temple and me in my bald avatar..