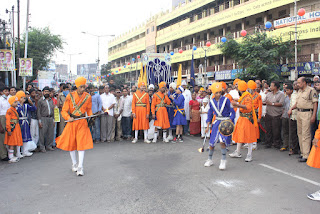 
Guru Nanak Gurpurab also known as Guru Nanak's Prakash Utsav and Guru Nanak Jayanti, celebrates the birth of the first Sikh Guru, Guru Nanak.[2] This is one of the most sacred festivals in Sikhism.[3] Apart from Sikhs, Hindus and other followers of Guru Nanak's philosophy also celebrate this festival.
The festivities in the Sikh religion revolve around the anniversaries of the 10 Sikh Gurus. These Gurus were responsible for shaping the beliefs of the Sikhs. Their birthdays, known as Gurpurab (or Gurpurb), are occasions for celebration and prayer among the Sikhs.
Guru Nanak, the founder of Sikhism, was born on April 15, 1469[2] in Rai-Bhoi-di Talwandi in the present Shekhupura District of Pakistan, now Nankana Sahib.[4] His birth is celebrated on Kartik Poornima, the full moon day in the month of Kartik. In the Gregorian Calendar, the celebration usually falls in the month of November, but its date varies from year to year, based on the traditional dates of the Indian calendar.[5] It is a Gazetted holiday in India.
The celebration is generally similar for all Gurpurabs; only the hymns are different. The celebrations usually commence with Prabhat Pheris. Prabhat Pheris are early morning processions that begin at the Gurudwaras and proceed around the localities singing hymns. Generally two days before the birthday, Akhand Path (a forty-eight-hour non-stop reading of the Guru Granth Sahib, the holy book of the Sikhs) is held in the Gurdwaras.
The day prior to the birthday, a procession, referred to as Nagarkirtan,[6] is organised. This procession is led by the Panj Pyaras (Five Beloved Ones).[5][7] They head the procession carrying the Sikh flag, known as the Nishan Sahib and the Palki (Palanquin) of Guru Granth Sahib. They are followed by teams of singers singing hymns[7] and devotees sing the chorus. There are brass bands playing different tunes and 'Gatka' teams display their swordsmanship through various martial arts and as mock battles using traditional weapons.[5][6] The procession pours into the streets of the town. The passage is covered with banners and gates decorated flags and flowers, for this special occasion.[5][6] The leaders spreading the message of Guru Nanak.[5]
Guru Nanak Jayanti 2010 at Pune, Maharashtra, India
On the day of the Gurpurab, the celebrations commence early in the morning at about 4 to 5 am.[5][6] This time of the day is referred to as Amrit Vela. The day begins with the singing of Asa-di-Var (morning hymns).[5][6] This is followed by any combination of Katha[6] (exposition of the scripture) and Kirtan (hymns from the Sikh scriptures), in the praise of the Guru.[5] Following that is the Langar, a special community lunch, which is arranged at the Gurudwaras by volunteers. The idea behind the free communal lunch is that everyone, irrespective of caste, class or creed,[8] should be offered food in the spirit of seva (service) and bhakti (devotion).
Night Prayer sessions are also held in some Gurudwaras, which begin around sunset when Rehras(evening prayer) is recited, followed by Kirtan till late at night.[5] The congregation starts singing Gurbani at about 1:20 am at night, which is the actual time of birth of Guru Nanak. The celebrations culminate at around 2 am.[5]
Guru Nanak Gurpurab is celebrated by the Sikh community all over the world and is one of the most important festivals in the Sikh calendar. The celebrations are especially colourful in Punjab, Haryana, and Chandigarh. Even some Sindhis celebrate this festival. 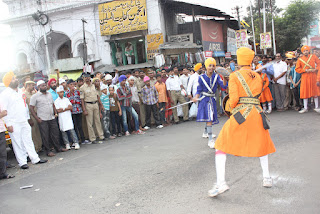 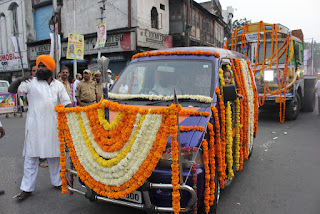 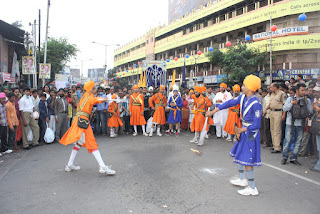 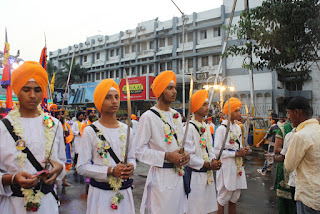 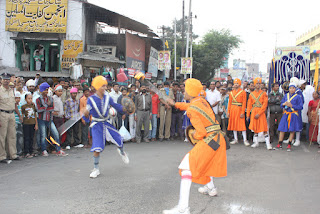 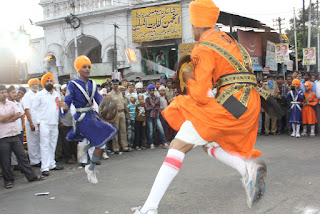 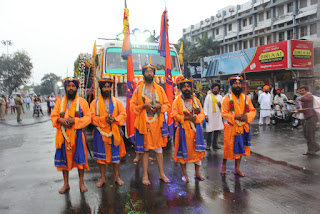 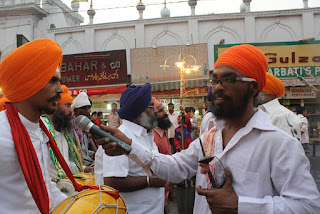 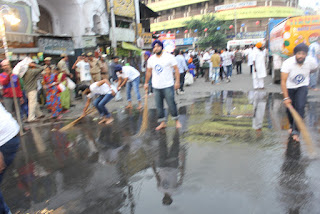 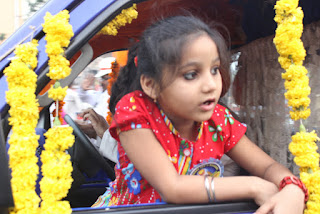 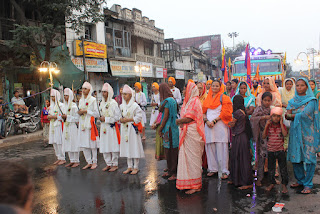 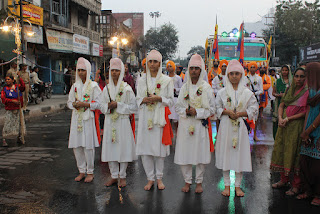 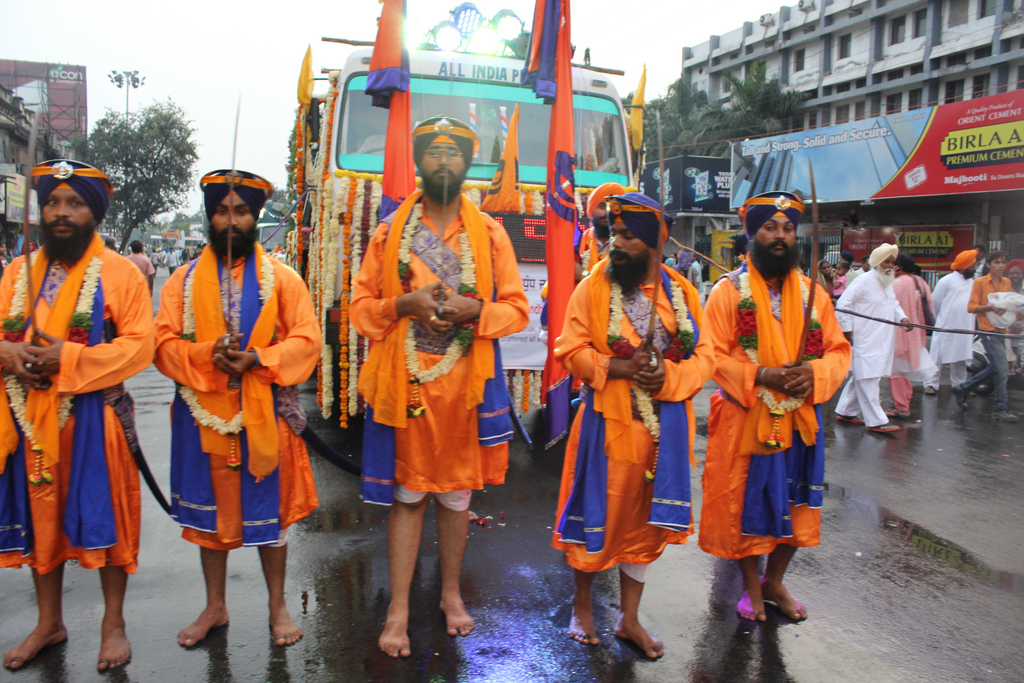 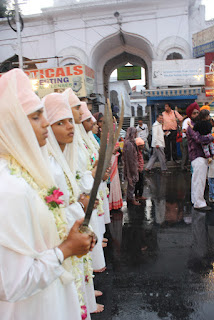 A Grandfather Speaks Out 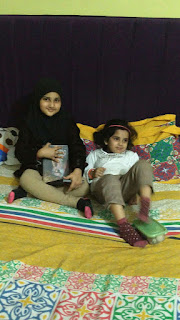 When I married on 26 November 77 I did not change much I drank I went on destroying myself when I became a father in 1979 nothing changed much two more kids and my life was as meaningless self destructive as ever but the birth of my first granddaughter 24 Nov changed me I gave up booze completely never touched a drop stopped smoking and my life centered around Marziya she was my penance I took care of her and tried to wash my sins of neglecting all my three kids when they needed me more I could not get out of the bottle .Nerjis came soon after and she brightened my life as a Malang than Zinnia my son Saifs daughter the prettiest doll in our house .So grandfather was a gift of a kind understanding forgiving God and now I know I can die peacefully .
Had my grandmother Nazmi Begum widow of Daroga Nabban Sab descendant of Mir Anis decided to leave India with her step sons and family to take the train to Pakistan we would have died a Million deaths just by the thought of it .
She stayed back at Thwai Tola Pata Nala through the many Sunni Shia riots and was sane enough to give my mother's hand to my dad who worked in Mumbai since 1937 ..my dad was 15 they say when he left Lucknow my mother was 15 when she married my dad and came to live with him in the slums of Kurla Bakhar .I was born in Lucknow at my grandmother's house .
I don't like Lucknow it did not get into my bloodstream I am a pucca Mumbaikar.And now a Bandraite.
By Firoze Shakir Photographer No1 - November 25, 2015

The Ex Drug Addict ,,My Tryst With Drugs ,, 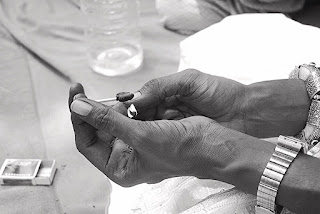 I only know one thing I gave up drugs a few months after my marriage in 1977 but sadly could not give up booze it took me many years ,,and I have been both out of booze and drugs since many years now.

I started smoking reefers and chillum with  Keith Kanga Atomic Forest .. when I stayed with Keith before my SSC exams ,, and it became strong once I entered college ,we mostly smoked in the corridors of the archives at Elphinstone College ,, we were born dreamers , our adda for getting hash was behind Rhythm House , close to my friends South Indian restaurant ,..and it was at this time I met some more hardcore friends and the smoking became heavy buying stuff from behind Taj ..sometimes the garden near Liberty cinema ,,, and my friends brother in law was a Kashmiri don at Shuklaji street , he had a rummy club .. they smoked chandul I smoked the chillum , 14 balls with my other friends ,, there were times after a smoke we added sugar to country liquor and jumped into the sea at Gateway crazy days ,, crazy times all came to an end ,, soon enough after I was doped to my gills in my commerce exam finals ,, boozing  would not stop because of these friends where I worked at the Taj.

Now looking back.. I wonder , I saw Porus my best friend chase beers with brown sugar at Wales Bar , he told me to try it out for kicks but I preferred hash..

Porus became a vagrant begging on the streets he lived at Cuffe Parade , a lot of friends became hardcore alcoholics I attended a few funerals ,, my turn had not come yet ,,

Once I gave up hash and began documenting the Rafaees , they smoked a lot , and had one grouse I did not share the chillum.. Hassan Ganda bought the best Afeem from the jungles but it was not for me  I did not partake in his poison.. I simply shot them and photography was what helped me get of booze , it became  a more intoxicating drug.. than what I drank... we came from Colaba to drink at the Pali Auntys joints near Union Park.. jeera and water pickle .. or Danda for fresh country jambool.. and actors came to drink in the house of the Kolis that were booze joints too.

And now after so many years ,there is no urge no yearning for the forbidden stuff that saved me from the gutter and early death and it was my wife who bought me out of this Unknown Zone .. without her I think I would have not made it this far ,,

And married now since 1977 ,, these are stray thought a day before my wedding anniversary.. tomorrow .

ps I went to Muscat in 1980 to get away from booze found there was more drugs and booze in Muscat Muttrah where I stayed ,,so came back defeated back to more heavy drinking and chaos.
By Firoze Shakir Photographer No1 - November 25, 2015

Email ThisBlogThis!Share to TwitterShare to FacebookShare to Pinterest
Labels: My Tryst With Drugs, The Ex Drug Addict

Only from the heart can you touch the sky. ~Rumi 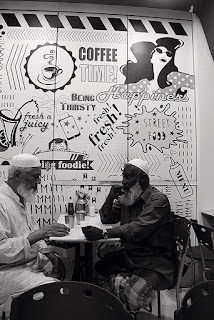 Do not grieve. Anything you lose comes round in another form. ~Rumi 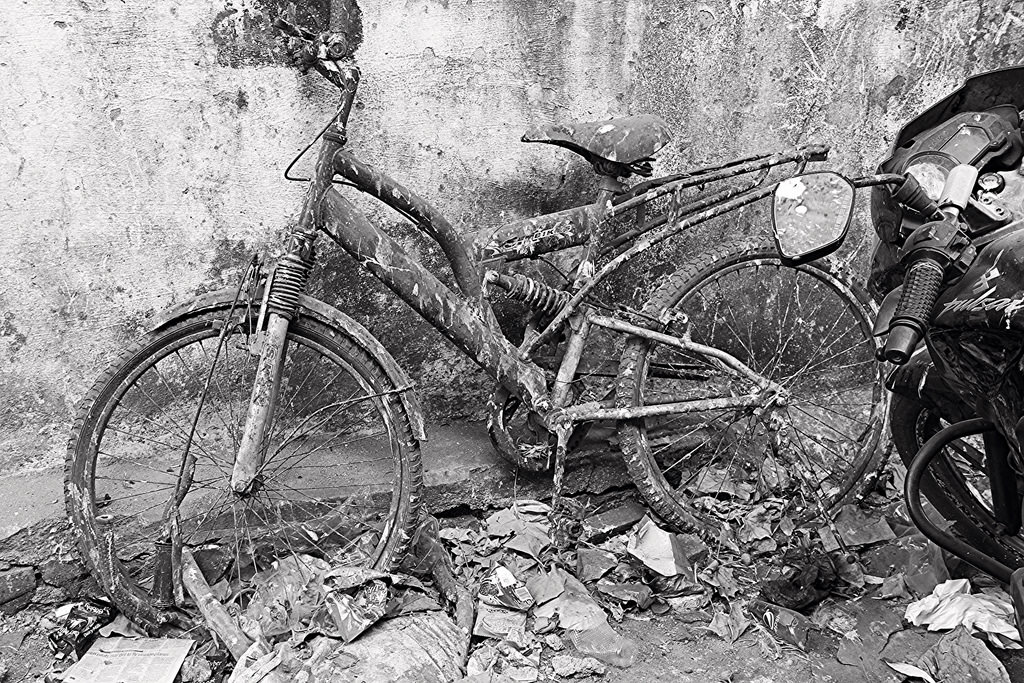 The wound is the place where the Light enters you. ~Rumi 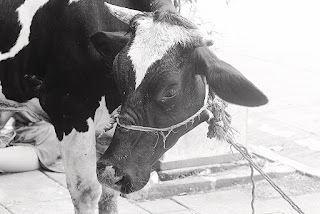 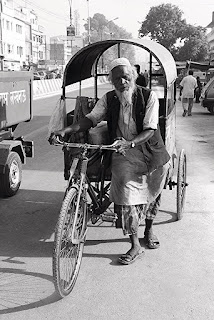 The breeze at dawn has secrets to tell you. Don’t go back to sleep. ~Rumi 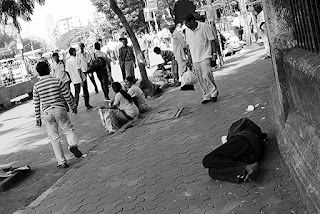 The Ear Cleaners Of Bandra Talao ,