Hallori Hand Matam/Mumbai Shia
Originally uploaded by flickr photographerno1
The Hallori Mumbai Shia is a unique force , a single one man army, army in the context of Matam and not insidious militantcy of a Jehadi.
The Mumbai Shia is a very peaceloving Shia, he goes about with his mourning, for him Moharam is two months of piety , restrain, peace and quiteude.
He is sombre in his thoughts and actions, but there are skirmishes year after year between the Shias and the Wahabbis, at Babula Cross road , this is what gives a bad name to the Shia Mumbaikar and also the Wahabbi counterpart.
Mumbai is a city which is a cauldron of hope for all of us, basically of a migrant ancestry, I think personally leaders of both communities must show restrain and grow up too..We should not make Mumbai another Lucknow.
Sectarian violence sectarian hatred destroys the cosmopolitan fabric of the society and the nation too..
By firoze shakir - July 24, 2007 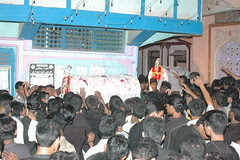 Athvi at Govandi/The Halloris
Originally uploaded by flickr photographerno1
Normally I celebrated Athvi the last segment of Moharam in Lucknow for two consecutive years, but as my eldest son Asif Shakir was getting married in Lucknow April 28 2006, I decided to skip the Lucknow Athvi , as it would have entailed two trips to the city of my birth.
I stayed back in Mumbai and my friend Cassim Hallori told me about the Athvi event in Govandi a suburb in Mumbai.The Halloris organize this awesome event , touted as the most famous one by ay standard.The Halloris hail from Hallor a very beautiful looking race, fair , blue eyes, although they look alike as this is a race that married within the families of two brothers who had their ancestral roots in Iran.
The Halloris are gifted to the extent that they are interior decorators, carpenters like Cassim , who is now doing goat farming as an alternate profession, than there are lyricists, poets , nohakars like Naiyab, Khushtar to name a few..
The Hand Matam of the Halloris is choreography of pain, they beat their chests , opening up wounds without using blades.. such is the power of their devotion to Ahle Bait.If it was not for Cassim this important segment would have remained unphotographed by me.
I am a loner, I dread congregations, groups, I shoot alone.
Having Cassim as a friend makes it easier that there is somebody to take care of my camera bag while I take a breather to participate in the Matams.It was because of Cassim that I pounced on the chance of doing the extremely difficult Iranian sword Matam.The swords are crafted in Iran, the hilt is heavy unlike the Japanese Samurai swords..So this is as far as I go, I shoot close to home, because of my recent wound on my hand , and the treatment meted out by Shia hardliners in Lucknow I had decided to completely stop shooting Moharam.I have .This is my swan song pictorially speaking.
I have spent a fortune on shooting pictures sometimes 40 rolls of one event, yes I am as crazy as sane as DF Duck..we are passionate about sharing our worlds..
Each batch of pictures just developing would cost me about Rs 5000/ before the advent of digital.I have so much stock of negs ,, slides but no scanner..
Earlier I gave copies of pictures I took free, I dont make money through this picture hobby of mine..I used to shoot a lot of Majlis , but I stopped that too.
I realised that the Mullah is a selfish man too, with his feet also made of clay.
I keep away from Shia Mosques and Shia dos..but I am a Shia nonethesless.
My house Majlis takes place at the Shia Khoja Bandra Mosque but I dont attend , in fact I have not entered this Mosque since last two years.
The only Mosque that beckons my restless soul is Moghul Masjid..for me this Gods website on earth, I am hyperlined to this page on my soul.
That is why I tell people I am not a very good Shia example..
The Shias of Lucknow the hardliner s had the chek to say I promote Hinduism because they the Hindus pay me money, I wish they did I would buy a high end Canon Digital SLR..My Shia soul is saffronised is something I can say very proudly..
I would rather live a Hindu than die the misguided death of a Jehadi.
You will find me sitting at St Peters Church, once in a while after Mass gets over , pondering over the mortality of human hating spirtuality.


So this series is about the Govandi Athvi...a very long series...ignore my rny rant just see the pictures ...I am trying to ulearn photo blogging at Flickrs.

.Another think it will take several rebirths for Ipernity to really become a Flickr..reflecting a flickr of a candle does not make you a candle at all...
Think Flickr Think
You wont ever sink
with pictures geo tagged that link
very female armour also has a chink
some love them but some go pink
with this toast to Flickr I drink
eyes focussed that blink
floating bare feet
on an Ice rink .
By firoze shakir - July 24, 2007 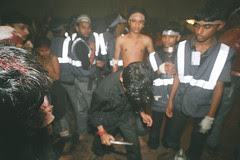 Kaiser Bagh Shia Childs Spiritual Cybercafe
Originally uploaded by flickr photographerno1
Kaiser Bagh is the Khoja Shia Gadh..
It lies at Dongri next to the Hazrat Abbas Dargah Lane.During the three days before Ashura , all the Shia kids cluster here to rigorously take part in the Zazir and Kama matam .
This is the beginning of ever Shia adult when he was a kid, the moment the Maulana completed his Majlis, the Alams and Taboots started taking the rounds of the hall, he instantly removed his shirt and began scourging his back.Or if he was more daring he grabbed the Kama dagger from Munna Bhais hand slashing his head no pain just remorse for his Imam.
Kaiser Bagh is a must see for those three days, all roads lead to Dongri.
Even the local Bohra kids move with their Alams and scourge their backs.
There is no Media presence , this is a private Shia do, just a few stray photographers or videographers recording the event.
I normally shot from the stage , later jumped down to participate in slashing my head or doing my Tandav..with my camera bag, my turban and my shawl within my eyes views.
At Shia events there are a lot of crooks who wear balck clothes pretending to be Shias and rob the belongings, or mobile phones..This happens at the Kumbhs too...Where there is smoke there is lot of fire...

I am posting all this from Cds , so I have to again work on them and resize them for web.
I could copy and paste from myMoharam pictures from my Homesite
www.photographerno1.com
But I am taking a longer route in the bargain finding pictures I have never posted before..So the best of me will lie at Flickr..
I have one regret because of various constrains I did not visit Ajmer Sharif this time.. I was very keen to go come what may, but it was not my call...
I missed Peersaab Hujra No 6 Fakhru Miya his family..
I missed Syed Salma Chishti the cyber khadim
I missed Char Yar
I missed the Malangs of Ajmer the dread head Bawas
I missed Zanjirwale Bawa
The Hijda Bawas
Moti Katra and all my Hijda friends Basanti ,Sohel Zeenath, Kajal..Mona, Gopal Hajji Babita, Laxmi Narayan Tripathi,
I missed Kapil Aggarwal..
Last but mostly the Kingdom of Peace and Humility, of Love the presence of Khwaja Garib Nawaz...his all pervading fragrance of Brotherhood of Mankind.
By firoze shakir - July 24, 2007