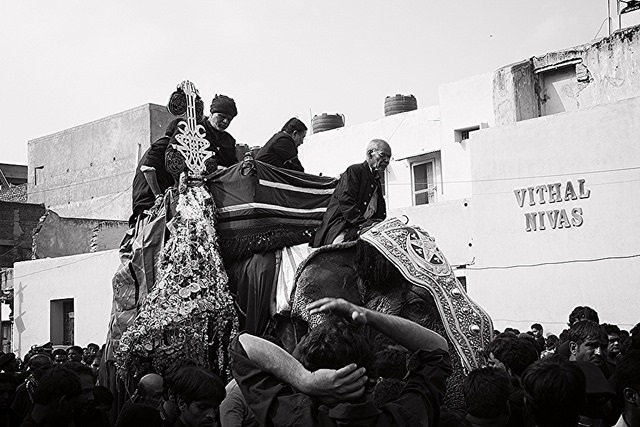 Bibi-Ka-Alam or Alam-e-Mubarak is an annual procession during Moharram. Bibi-ka-Alam, installed in the name of Imam Hussain Prophet's Grandson and the third successor of the prophet at the Shi'ite ashurkhana at Dar-Us-Shifa,[1] Hyderabad, India on the 10th day following Moharram.[2] It is a Shia event. The procession starts at Alawa-e-bibi situated at Dabirpura and ends at Chaderghat. During the procession the devotees mourn the death by reciting Nauhey, (narrating the incidents occurred during 10th Moharram 60 Hijri in Karbala). The daughter of Mohammed. Hazrat Fatima-e-Zehra is called Bibi. The locality is known as Mohalla Bibi Ka Alawa.[3

History[edit]
Throughout the history of Qutub Shahi reign, the tradition of Azadari or Mourning of the Martyrdom of Imam Hussain and his followers was conducted with high regard under state supervision.

This Ashur Khana was renovated by the Seventh Nizam under the advice of Nawab Zain Yar Jung. The main entrance and its roof remain unaltered on which 1299 H, the year of construction is engraved. The room in which the Alam is installed is a strong room and the Alam is kept in a safe made on the design of a Sarcophagus (Zarih).

The Relic[edit]
There is a relic enclosed in this Alam as well. The relic is a piece of the wooden plank on which Janab Syeda was given her final ablution by her husband before burial. This Relic was in Karbala for a very long time. In the time of Abdullah Qutub Shah it reached Golkonda. The Relic was preserved in the calligraphic Alam with Arabic lettering of Allah, Mohammed and Ali. It was covered with an alloy of metals and gold. later Nasir-ud-daulah offered jewellery to the Alam which still exists.

There was a Royal decree sanctioning funds for the expenses and award of jagirs for the maintenance of the attendants. The provision for the paraphernalia of naubat, mahi maratib and the Royal Umbrella for the procession were also made. Throughout the year a wooden louvred blind is placed at the entrance Two green pouches, in the shape of ear-rings containing precious gems are suspended on either side of the Alam.

The Procession[edit]
This Alam is the symbol of the climax of the observance of the Moharrum mourning in Hyderabad. It comes out on an elephant on the 10th of Moharrum and presents the impression of a Royal cortege in procession.[4]

The Alam, as it emerges from the Alawa, the mourners keep chanting Ibn-az-Zehra Wa Waila, which means Goodbye Son Of Zehra,which is a protestation against the slaying of Zehra's son Hussain. Since long years it is a tradition of the mourners in the procession to chant these words. 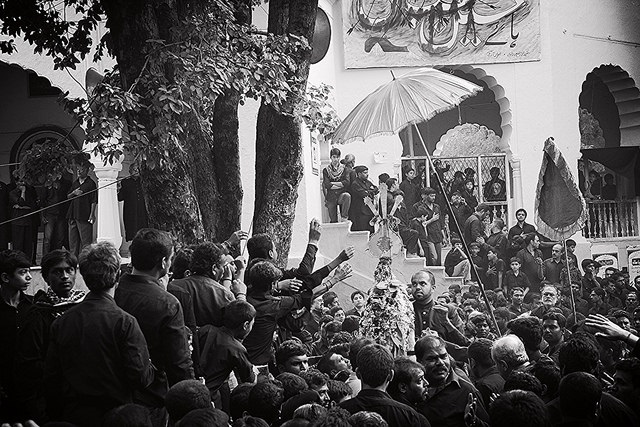 I do not have a Hyderabadi bloodline connection and my ancestors were from Lucknow , my dear departed father called himself Moghal Pathan.

I discovered Hyderabad very late in life I came to Hyderabad first time to attend a shoot of Govindas David Dhawan film with Karishma Kapoor , I was called there by Mr Chinni Prakash for Govindas look..for a dance sequence .

After that destiny or my cosmic fate pulled me to Hyderabad in 2003 with help from Halu Bhai of Bandra I visited his relatives Sajjad Bhai and Kazim to participate and shoot Moharam i Hyderabad , I was hooked to Hyderabad ,, I liked the city the people the Shia ethos I came back to shoot Chehlum but I was faced with the ire of some Hyderabadi spiritually arrogant Nawab who had more hate for Shia photographers than even stray dogs ,,

I kept away from Hyderabad being sensitive by temperament and nature I did my kama  matam here .My wife had accompanied me too we stayed and savored the hospitality of Abid Bhai  Painter .

After that I visited Hyderabad shot Ashura in 2009 and than again the last time in 2012 .

Much as I tried to come to Hyderabad it just would not happen I wanted to shoot Chehlum in Hyderabad 2013 could not get a rail ticket till the end I did my Chehlum at home ,, as I do not participate in Mumbai Azadari for personal reasons , this was my first Chehlum in the darkness of my house and my soul.

Ashura 2013 I had to come to Delhi as my American friend cancelled Hyderabad last minute he wanted to be in Delhi so I came to Delhi and documented the same.

And I yearn for Hyderabad I have made some great friends and Qayam son of Akthar Bhai Naqi Bhai Lutfi brothers and Sajjad Bhai Abid Bhai make me feel at home.

I have another friend in Hyderabad Zain Hussain Sab I have never met him but he is cosmically attached to the impoverished poetry of my beggar soul.

And so I am reblogging these Hyderabad Ashura pictures for the Shias of Hyderabad their hospitality the love I can never repay save by this token of Memories of Ghame Hussain.

All this was shot in 2012 at Hussaini Koti Hyderabad. on 8 Moharam..