What Makes A Man Renounce Life Beg On The Streets 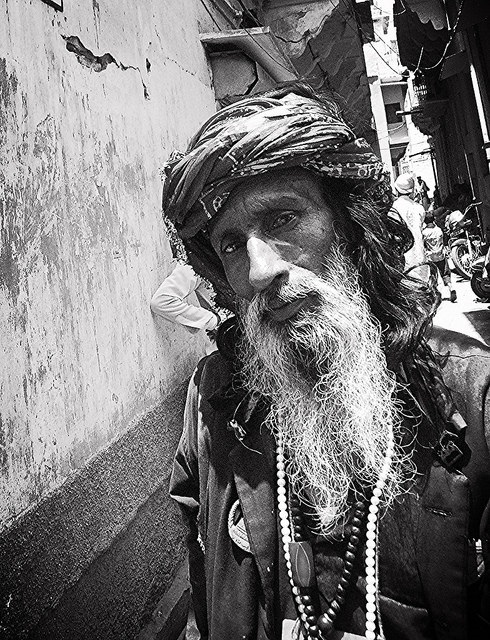 A lot of people I met get tired of dogma religious rules the tyranny lopsidedness of the Mullahs fatwas edicts , gets tired of formal dictatorial diktats of religiosity that has got commercialized money based .. all this turns them towards Sufism and here I must mention Indian Sufism is nothing but a freer form of Sunnism.
So the person who moves away from a strait jacket does not have to change the core of his belief it all remains the same and that is why there are various Sunni groups trying to take control of the Dargahs including the Government as the funds are enormous no transparency and the politicians to eye this apple pie.
But that is not part of this blog I am not much of a conversationalist , and most important I avoid getting personal unless the person tells me and I know Bawas  Sufi monks that have families but are happy begging with beads rund theur necks and turbans and a beggars bowl..
when I first made my appearance in the Sufi circuit with my Bawa attire rich original gems turban a staff in wood ad silver and barefeet I was a threat to the other bawas and what confused them moew why the camera on my person and I am a Shia too,, but than they realized if I did get money as a beggar I gave it to the Murshad and than one day the Murshad told me Bawa you better keep a beggars bowl I bought a fiber one for Rs 501  I carry it on my person at the Dargahs I eat my meals in it .. the original beggars bowl costs over Rs 50000 made out of dried coconut giant shell cured and mystified.

I met many Bawas highly educated and they had all run away from home nagging bragging wives , stupid dumbass  children.. and fucked bosses.
The other allurement was perhaps the love for the chillum I dont smoke the chillum.

Than there are Bawas who keep young kids that are their apprentice , take care of their needs , make the chillum , press their legs and do all the odd jobs the apprentice one day will become a Bawa too and the lineage continues.

There are foreigners who have become Bawas they always request me kindly not to shoot their pictures it would hurt their families back home , bawas from Poland Russia Kazakistan and England too,

However now as a Malang myself I am surprised the number of foreigners that walk from Delhi to Ajmer Sharif at the start of the Urus ,,I have yet to do this trek,,

There are women bawas too,,who got jilted cheated by their lovers husbands and they have their own following ,,

There are Hijras who got tired being screwed , literally and metaphorically gave up everything and became Hijra Bawas ..

There are Hijra Tantrics Exorcists and Shamans too.. all living in a world beyond this world and I am holding on to them with my camera strap.. absorbing their silence their nuances and their myth ,

There was a famous photographer from Palanpur late Mr AL Syed who also renounced everything to become a fakir I am told ,,

Email ThisBlogThis!Share to TwitterShare to FacebookShare to Pinterest
Labels: What Makes A Man Renounce Life Beg On The Streets

What Happened To The Common Mans Broom ? 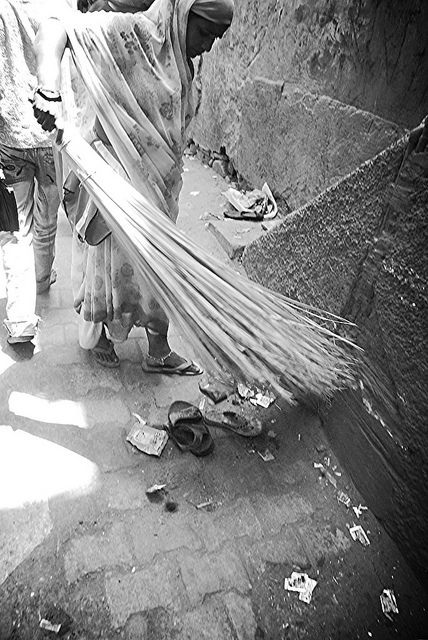 democracy a theater company of fools by fools for fools
carried on backs of mules .if you cannot govern sorry
you lost the right to rule ,,, your honesty your sanctimoniousness had you fooled ,,
By Firoze Shakir Photographer No1 - August 06, 2014

Email ThisBlogThis!Share to TwitterShare to FacebookShare to Pinterest
Labels: am admi, beggar poet, What Happened To The Common Mans Broom ?

To Beg Or Not To Beg - Beggars And Ajmer 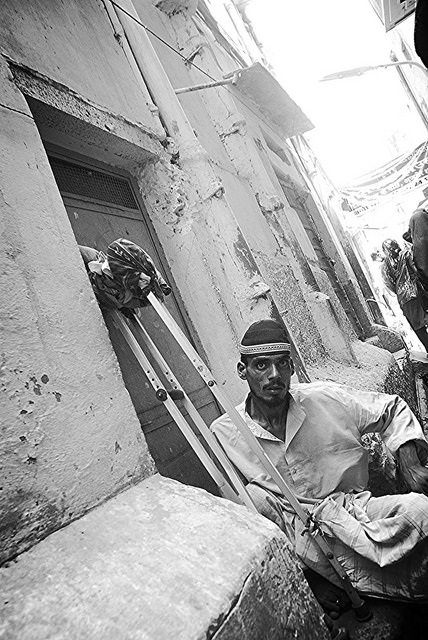 The moment you enter Ajmer for the annual Urus of the Holy Saint Khwajah Garib Nawaz , beggars start appearing , they just come out of the blue mystically too .

If like me you prefer to walk to the Dargah through the narrow winding back lanes that lead you to the gates of the Dargah , you will keep meeting them with every stride you take.

And the beggars at Ajmer during the annual Urus come in all size shape and deformity and if like me you prefer shooting beggars than it is here that your journey into pain starts.

Whether the beggars are part of a Beggar Mafia or organized begging I dont know , but being a pucca street smart Mumbaikar I know you simply just cant sit on the street and beg unless you grease the local goon who pushes the envelop upwards to the cops and others in Mumbai lingo it is called Hafta .

Begging thus becomes a business like hawking ..an illegal beggars zone and begging is a necessity at pilgrimage spots ,for that huge Indian misplaced emotion called Charity.

Even the change collected by the beggars is handed over to the money changers for a fee , this change is given to the devotee for giving it back to the beggars for a nominal fee .

Ajmer Sharif during the Urs is a Market of Beggars and also a Market of Thieves , pick pocketeers by simply looking at you they know what you are carrying and with razor sharp mind they cut your pockets very easily.


When the thief is caught he gets hammered by the cops they take him into custody but I am told they let him off with a warning taking away all the loot  that he may have hidden on his person.

Ajmer Sharif has a large number of drug addicts gardalus brown sugar users and this is the reality that is seen without using my camera.

But my subject is beggars and as you climb up from Ajmer towards Taragadh you meet beggars lepers , young kids forced into begging by the parent , very small children are rented out , after drugging them and it is a lucrative art form for generating sympathy and more money too.

A few blocks away from Dhai Djinn Ka Jhopda there is a mound where the beggars stay in makeshift tents along with the rifai and malang groups ..some of the beggar girls are extremely beautiful and vulnerable ,, money is the name of the game.

And sadly neither the Dargah authorities or the cops can control crime as they are busy keeping the peace law and order during the most crowded Muslim pilgrimage of India.

And I shoot beggars to show you the underbelly of society , there are couple with kids , the lady in a hijab who stand at a street corner pleading they were robbed and need money to go back home and you will find them every day at a new spot .

Than there are the fakirs who accost you , they are beggars too with their peacock feathers blessing you and almost breaking your back.

I beg too for a friendly beggar with contorted legs I have a beggar bowl I place it in front of me and I make a lot of money as the people at Dhai Djinn Ka Jhopda the place where my friend sits take my picture with their mobile phones ,.some think I am a holy man touch my feet some give me leftover food that I eat with my beggar friend .. Yes I shoot beggars and this is the chapter of my life when humility becomes the handmaiden of poetry.

There is a lot to see shoot at Ajmer and I have never shot the interior of Ajmer Sharif Dargah since they banned the camera in the Dargah premises . The Murids bring my camera till the Asthana of my host Peersaab Fakhru MIya I shoot the Hujra and their Chatti celebrations than the Murid hands me my camera outside the gates of the Dargahs.

I either go sit with my Malang Guru Masoomi Baba or head to Moti Katla to shoot the exotic hijras of Ajmer . Luckily I have access and most of them allow me to shoot them i the privacy of their rooms .. making all kinds of Katrina Kaif like poses .Hijras love Bollywood and some of the hijra damsels would give Bollywood a run for the money..

Shooting the hijra sandal on the streets of Ajmer Sharif is a tough one as I am barefeet and their dance and their Nakhras I have shot it all ,,,I have shot the hijra children and it is one time I enjoy being away from Mumbais heat and humidity ,, it is hot in Ajmer too no pun intended .. but if you like shooting people than Ajmer is the place I shoot Pushkar too I have two good friends and Raj Tilak an aspiring Bollywood actor , he has just done a role in a serial is an iron smith and all my kama head cutting daggers are from Pushkar ..the one I use is blessed by my friend at the Brahma Mandir ,, according to him every drop I shed for Imam Hussain becomes his drop too. 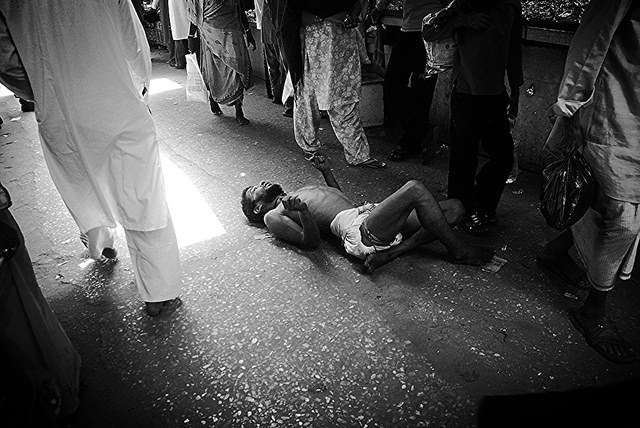 stronger than
my limpid spirit
to the brass-tacks
i will not crack ..
my putrid pain
hauntingly keeps
coming back ,,
a saucer of tea
a piece of loaf
my morning snack
my wife bid me good
bye tears in her eyes
she could not hold
back..deleted doomed
destiny colorless black
By Firoze Shakir Photographer No1 - August 06, 2014

Email ThisBlogThis!Share to TwitterShare to FacebookShare to Pinterest
Labels: Dear Dr Glenn Losack Like a Tortoise I Carry Gods World On My Back 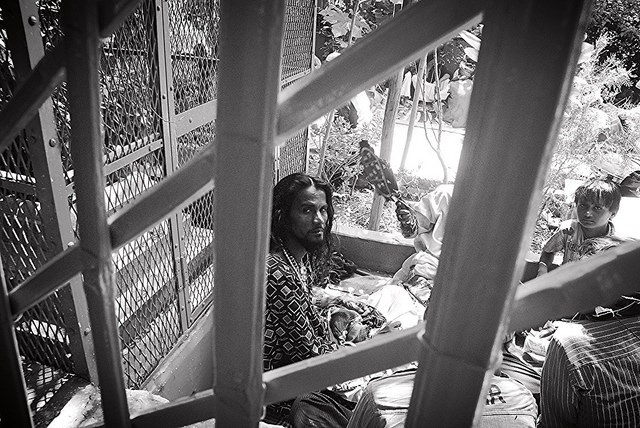 As you enter the Jalali Chowk you first see the Dhuni and the head of the Jalali Rifais Nobat Ali Baba .
Beyond his fiefdom extends groups of Rifaislike the Chancawalli Rifais from Mumbai, Hijra Bawas and many other rifai orders .

Shooting the Rifai was not as easy as it seems luckily for me I was introduced to them by late Peshimam of Makhdhoom Shah Baba Dargah Mahim  my good friend Fahad Pathan.

I shot the Chancawalli Rafaees or Rifais at both the Mahim Dargahs ,, the second one on the main Mahim Road of Hazrat Fakruddin Shah Baba .

I shot the Chancawalli Rifais at Ismail Shah Babas Dargah at Parel, Ali Maulah Dargah Dharavi and climbed the Malangad mountains barefeet to shot the Haji Malang Urus for many years .

So I am known among the Rifais , than I began documenting the Madarriya Order of Dam Madar Malangs , the Sada Suhagins who are monks in ladies dresses but not eunuchs ,, and the Siddis Indo African followers of Baba Gor from the Gir Forests of Junagadh,

So it has been a very long journey ,and sadly our government does not sponsor bloggers , its all been done with my own money selling of my personal goods to make a few trip to document a world away from glossy travel brochures .

The Hijra documentary is not for public view that includes hijra healers , tantrics , shamans and hijra bawas.

Hassan Ganda and his cousin Farookh are the greatest exponents of body piercings rituals known as Zarb.. they were both related to late Handi Sai Khalifa Baba who died at Kota of overdose .. he could not do without the chillum and opium.

I have met strange Rifais there was one highly drugged Baba who in his frenzy of Kaif slashed my stomach with a sword cutting up my tshirt but not harming my body later he hugged me and cried ...

I use the sword and dagger too but I use it for real during Ashura and Chehlum to cut my head I bleed .. I hurt .

While the rifais consider bleeding a failed part of their rituals and cut themselves without bleeding this power comes from Ghaus Pak the Saint of the Rifai Order also known as Hazrat Abdul Qadir Gilani.

Late Handi Sai was keen on my becoming a Rifai but I was not spiritually inclined and after his death , I joined the Madarriya order of Dam Madar Malangs in 2011 .. with my Belgian friend Marc.