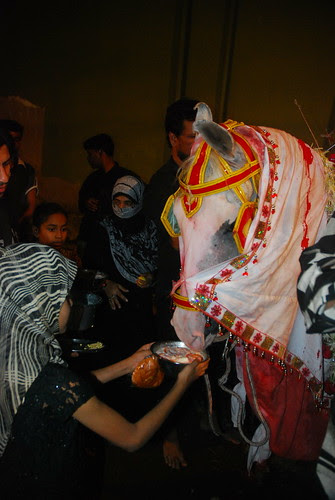 Okay you guessed it right I am fascinated by Zuljana who here is a horse that is replicated as Imam Hussains faithful steed,,


The Shia kids adore him and feed him milk and jalebis, he tastes it and this becomes Tabaruk.. spiritually enhanced offering.

The Shia women too are always there in large numbers around Zuljana.. 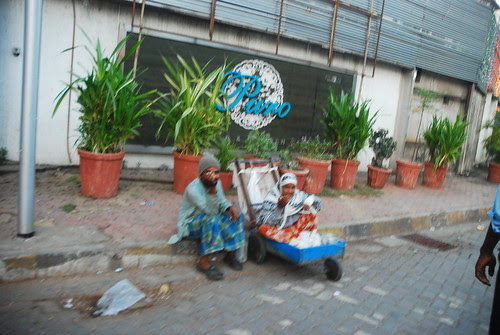 I am in Chennai I reached here on the 13 December , I connected with a Momin Ashfaque in Dubai on the net he connected me to Misaq who is a devout helper of Hussain , he runs the Ali Moulah Channel here in Chennai.

I never knew these guys before his cousin Musayb picked me up at the station , I stayed a night at a lodge , shot the 7 Moharam procession on the streets of Chennai at Triplicaine .

They sat there are only 10000 Shia souls in Tamilnadu , but I have never seen such a huge crowd the fervor the intensity as I found among the Chennai Shias and I am crying as I write at a Internet cafe in Dharmapuri,I cafe, I met Dr Meer , son of late Ali Master , he took me out of the lodge and bought me to his own house, his father died recently on Eid e Ghadeer , he took me around the streets of Chennai after I had shot the 7 Moharam juloos , I shall post pictures when I return to Mumbai after shooting the Chennai Ashura.


Last night I traveled with Dr Meer he has a assignment helping the poor sick people in Dharmapuri, I have come with him , I shot the streets of Dharmapuri he will return in the evening than I go with him to shoot the fire matam on the border of Tamilnadu Karnataka


The warmth of the Chennai Shias is holistically healing they go out of their way polite soft spoken and though I look like a strange apparition with earrings pierced to my ear lobes they wonder who I am, , I am not wearing my usual signature jewelery because of Ashura , however the Chennai Shias are people who are bound to Hussain and Hussainiyat ...spreading Humanity and Peace as the Gospel of Ahle Bayt.

I have met some great folks here , actually I was only going to shoot 7 Moharam and than leave the same night to shoot Hyderabad or Bangalore Ashura....but after connecting with the Chennai Shias, with Misaq and Musayb I thought I will shoot the Ashura here too...and complete the circle of Shia mourning

So I am adding text to my old post I miss the lap top at home , I have already shot a 20 GB card as of now..in one day .

Dharmapuri is peaceful town of Tamilnadu and the people are very kind , the tea and the coffee here is heavenly , I have never tasted such coffee anywhere in India.

Dr Meer is a Shia scholar a Zkir e Ahle Bayt , a journalist and like me a colorful personality who gives equal respect to all religiosity , so we just clicked , I shot the Sunni Alams at Chennai street corners I shot a Sunni Alam procession on the street chanting Ya Hussain dressed in black clothes.

Chennai weather is very cool , and comforting, and in spite of traveling all night in the bus I changed two buses to get to Dharmapuri I am as fresh as ever.

I miss my grand daughter Marziya Shakir 3 years old worlds youngest street photographer and her picture on my mobile gives me comfort..and strength too.
My wife has gone to Karbala for Ziyarat I discover Karbala in the Soul of the Shias of Chennai.

And just above this Internet cafe computer is a Warning that says Dont Install soft wares in Computer..