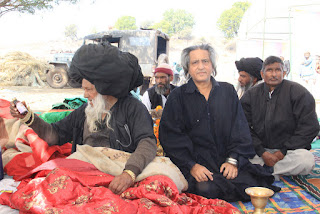 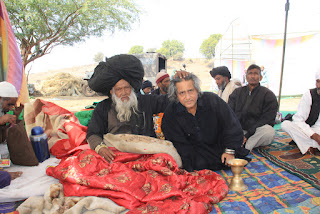 I met Dam Madar order head Syed Masoom Ali Baba in 2005 ,, and got fascinated by their austerity , their dread heads and the simplicity of their spiritual life .
I began shooting them both Masoomi Baba and Syed Rafik Ali Baba at the Char Yar Mosque and cemetery ..Every year I attended the Urus of Khwajah Garib Nawaz Ajmer Sharif I stayed with my host mentor Peersab Fakhru Miya Hujra no 6 ,,
I would shoot the Rifais the quintessential hijras at Ajmer .. but I would find myself at the feet of Masoomi Baba ,,, I loved shooting them and the people malangs around them.
Their frugal lifestyle their abundant love for Imam Ali they talked about the sacrifice of Imam Hussain they talked about Karbala ,
They were spiritually connected to Khwajah Garib Nawaz he was the bond of a force ,,, through their own Holy Saint Zinda Shah Madar Makanpur .
Than in 2011 I took the Pyala with a Belgian friend we both became Murids and Malangs of Masoom Ali Baba,, we both visited Makanpur in 2013.
Syed Masoom Ali Baba lives at Panihar 22 km away from Gwalior MP.. and I had never dreamed I would ever come here ,..but I did on 27 Jan 2016 ,, invited by him for the chalisva of the mother of his nephew Razzak Ali Baba Gaddi Nasheen of Makanpur and Panihar and Rampur ,..Madarriya order ,
Masoom Ali baba missed Marc Malang and Dorothea ..also known as Miriam.
The main event was on 28 Jan it began in the daytime and ended the next morning ,, I was not well in real bad shape could not be too adventurous but I shot what I was destined to shoot ,, the village kids followed me everywhere because of my Bollywood status ,,
All in all it was an enlightening trip I met other Malangs Sunni scholars poets and added some more to my learning .
I did not shoot a lot , but I shot videos ,, from the Dargah of the Malangs at Panihar where I stayed it was traversing a bad road to reach the event site ,, so I spent most of my time in the village by myself.
Talking to the villagers ,,,and a very very distant dream called Acche Din,, not here in Panihar .. it will take a lot of time ,,,
Masoom Ali Baba likes me a lot when I shot his video he was in tears ,,,he calls me Maulaiee too..
And now I will get ready to visit the Urus of Zinda Shah Madar Makanpur .. in Feb.. and I will miss my brother Marc Malang ,,
A French photographer another dear friend will join me here ...to document the Humility of the Dam Madar Malangs of India ,...
Dam Madar Beda Par.