The End of a Long Journey Ramlila 2009 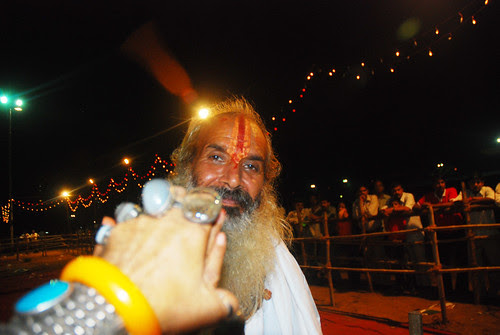 The End of a Long Journey Ramlila 2009, originally uploaded by firoze shakir photographerno1.

This ends the Ramlila storyboard in two sets Ramlila and Ramlila Backstage..

I am grateful to the organizers producers actors of the Ramlila Committee for giving me the desired cooperation to shoot these pictures..

Without their goodwill and trust it would not have been possible and a special thanks to Sundar I Kannar... 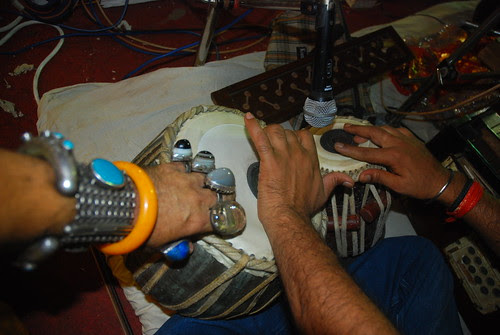 The tabla (Hindi: तबला, Bangla: তবলা, Urdu: تبلہ tablā from Arabic: طبل، طبلة tabl, tabla) is a popular Indian percussion instrument used in the classical, popular and religious music of the Indian subcontinent and in Hindustani classical music. The instrument consists of a pair of hand drums of contrasting sizes and timbres. The term tabla is derived from an Arabic word, tabl, which simply means "drum." [1]

Playing technique involves extensive use of the fingers and palms in various configurations to create a wide variety of different sounds, reflected in the mnemonic syllables (bol). The heel of the hand is used to apply pressure or in a sliding motion on the larger drum so that the pitch is changed during the sound's decay.

The history of this instrument is uncertain, and has been the subject of sometimes heated debate. Rebecca Stewart[2] suggested it was most likely a hybrid resulting from experiments with existing drums such as pakhawaj, dholak and naqqara. The origins of tabla repertoire and technique may be found in all three and in physical structure there are also elements of all three: the smaller pakhawaj head for the dayan, the naqqara kettledrum for the bayan, and the flexible use of the bass of the dholak.

A common legendary account[3] credits the 13th century Indian poet Amir Khusrau as the inventor by splitting a single Pakhawaj drum into two. ('thoda, tab bhi bola - tabla': 'When broke, it still spoke' - a fairly well-known, though almost certainly mythical Hindi pun) None of his writings on music mention the drum, but this apparent tradition of late invention, combined with the absence of the instrument in South Indian music and the closed-ended, paired design that relates it to the Western clay-drums and tympani, altogether supports the view that the tabla is a comparatively recent development in northern Indian music. Reliable historical evidence[citation needed] places the invention of this instrument in the 18th century, and the first verifiable player of this drum was Ustad Suddhar Khan of Delhi.

Muktesvara temple (6th-7th century) and Bhuranesvara (and three other cave temples) of Badari in Bombay (6th century) contain depictions of the puskara drum. Musicians often placed the puskara's smaller vertical drum (called 'alinga'), on their lap and played more than one drum at a time.

Similar regional instruments include the Punjabi dukkar, the Kashmiri dukra, the duggi in eastern Uttar Pradesh, and the mridangam. The mridangam (Southern equivalent of the Northern pakhavaj) is the principal drum in South Indian Carnatic music. The dhol (dholak) of eastern Afghanistan is related in terms of both construction and playing style. The main distinction of the tabla is the pairing of two different types of single-headed drums, whereas the dukkar, dukra, and duggi are pairs of the same type and the mridangam and dhol are double-headed, barrel-shaped drums.
[edit] Nomenclature and construction

The smaller drum, played with the dominant hand, is sometimes called dayan (lit. "right"; a.k.a. dāhina, siddha, chattū) but is correctly called the "tabla." It is made from a conical piece of mostly teak and rosewood hollowed out to approximately half of its total depth. The drum is tuned to a specific note, usually either the tonic, dominant or subdominant of the soloist's key and thus complements the melody. The tuning range is limited although different dāyāñ-s are produced in different sizes, each with a different range. Cylindrical wood blocks, known as ghatta, are inserted between the strap and the shell allowing tension to be adjusted by their vertical positioning. Fine tuning is achieved while striking vertically on the braided portion of the head using a small hammer.

The larger drum, played with the other hand, is called bāyāñ (lit. "left"; a.k.a. dagga, duggī, dhāmā). The bāyāñ has a much deeper bass tone, much like its distant cousin, the kettle drum. The bāyāñ may be made of any of a number of materials. Brass is the most common, copper is more expensive, but generally held to be the best, while aluminum and steel are often found in inexpensive models. One sometimes finds that wood is used, especially in old bāyāñs from the Punjab. Clay is also used, although not favored for durability; these are generally found in the North-East region of Bengal.

Both drum shells are covered with a head (or puri) constructed from goat or cow skin. An outer ring of skin (keenar) is overlaid on the main skin and serves to suppress some of the natural overtones. These two skins are bound together with a complex woven braid that gives the assembly enough strength to be tensioned on the shell. The head is affixed to the drum shell with a single cow or camel hide strap laced between the braid of the head assembly and another ring (made from the same strap material) placed on the bottom of the drum.

The head of each drum has an inner called the syahi (lit. "ink"; a.k.a. shāī or gāb). This is constructed using multiple layers of a paste made from starch (rice or wheat) mixed with a black powder of various origins. The precise construction and shaping of this area is responsible for modification of the drum's natural overtones, resulting in the clarity of pitch and variety of tonal possibilities unique to this instrument. The skill required for the proper construction of this area is highly refined and is the main differentiating factor in the quality of a particular instrument.

For stability while playing, each drum is positioned on a toroidal bundle called chutta or guddi, consisting of plant fiber or another malleable material wrapped in cloth.
[edit] Gharānā — tabla tradition

The term gharānā is used to specify a lineage of teaching and repertoire in Indian classical music. Most performers and scholars recognize two styles of tabla gharana: Dilli Baj and Purbi Baj. Dilli (or Delhi) baj comes from the style that developed in Delhi, and Purbi (meaning eastern) baj developed in the area east of Delhi. Delhi Baj is also known as Chati baj (Chati is a part of Tabla from where special tone can be produced).

Musicians then recognize six gharānās – schools or traditions – of tabla. These traditions appeared or evolved in presumably the following order:

Other tabla performers have identified further derivations of the above traditions, but these are subjective claims not universally recognized.[citation needed] Some traditions indeed have sub-lineages and sub-styles that meet the criteria to warrant a separate gharānā name, but such socio-musical identities have not taken hold in the public discourse of Hindustani art music, such as the Qasur lineage of tabla players of the Punjab region.

Each gharānā is traditionally set apart from the others by unique aspects of the compositional and playing styles of its exponents. For instance, some gharānās have different tabla positioning and bol techniques. In the days of court patronage the preservation of these distinctions was important in order to maintain the prestige of the sponsoring court. Gharānā secrets were closely guarded and often only passed along family lines. Being born into or marrying into a lineage holding family was often the only way to gain access to this knowledge.

Today many of these gharānā distinctions have been blurred as information has been more freely shared and newer generations of players have learned and combined aspects from multiple gharānās to form their own styles. There is much debate as to whether the concept of gharānā even still applies to modern players. Some think the era of gharānā has effectively come to an end as the unique aspects of each gharānā have been mostly lost through the mixing of styles and the socio-economic difficulties of maintaining lineage purity through rigorous training.

Nonetheless the greatness of each gharānā can still be observed through study of its traditional material and, when accessible, recordings of its great players. The current generation of traditionally trained masters still hold vast amounts of traditional compositional knowledge and expertise.

This body of compositional knowledge and the intricate theoretical basis which informs it is still actively being transmitted from teacher to student all over the world. In addition to the instrument itself, the term tabla is often used in reference to this knowledge and the process of its transmission.
[edit] Tabla terminology

* Ustad' - a master of the tabla technique and gharānā, or school. Hindus are referred to as Pandit.
* Gharānā - any of the six schools (Punjab gharana, Delhi gharana, Benares, Ajrara, Lucknow, Farukhabad) of tabla.
* Syahi - the black spots on the tabla, also called gab. Composed of a dried paste derived from iron filings and applied in several separate layers to the head of the drum. Sometimes called the shyani.
* Keenar - the outer ring of skin on the head of each of the two tabla drums. In Hindi, known as the chat.
* Sur - The area between the gaab and the keenar. In Hindi, known as the maidan.
* bol - both mnemonic syllables and a series of notes produced when stroked. E.g. Na, tin, Dha, Dhin, Ge, Ke, etc.
* Theka - a standard series of bols that form the rhythmic basis of tabla accompaniment for a given tala.
* Rela - a sort of rapid drum-roll.
* Chutta - the cushions used when placing the tabla.
* Baj, Baaj, or Baaz - a style of playing, different from the gharānā. Two main styles developed, Purbi Baj and Dilli Baj. Dilli, or Delhi, baj is the *style of bols and playing that originated in the city of Delhi. Purbi (meaning "eastern") developed in the area east of delhi. Both have different ways to play bols.
* Bāyāñ or Duggi- The metal drum providing the bass notes in tabla.
* Dayan ot Tabla - The wooden drum providing the treble notes in tabla.

The Older The Violin Better The Tune 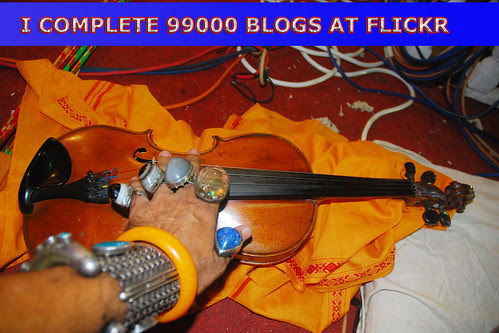 The Older The Violin Better The Tune, originally uploaded by firoze shakir photographerno1. 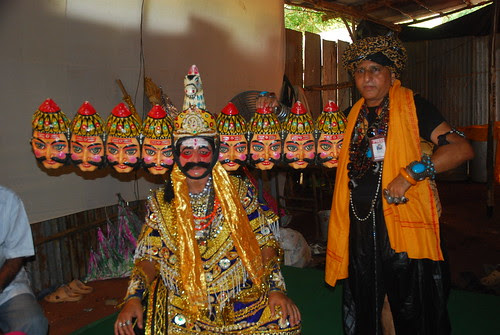 An Extra Head For Ravan... 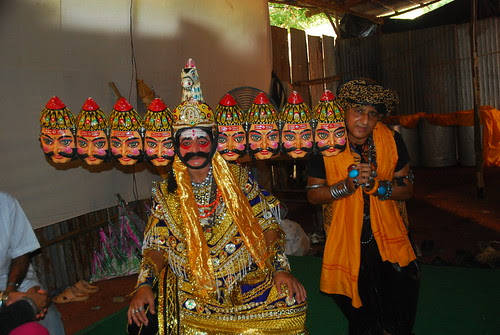 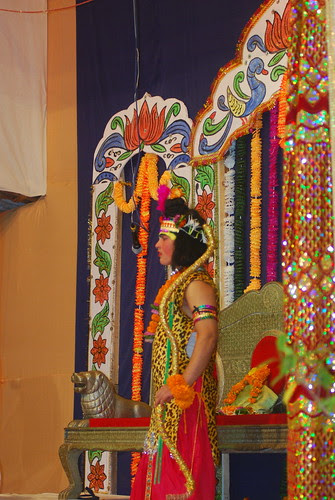 I continue from where I had left this series in order to post the Durga Visarjan pictures .

This is a series I conclude and also after 40 more pictures reach a landmark of 99000 photo blogs at Flickr a long journey that I began in July 2007.

This would have not been possible without all of you..my friends, readers and viewers.
It is your encouragement that kept me going..when I do reach the 100000 thousand mark I shall dedicate it to a good friend Nauman Umair a Flickr and Facebook friend ..I had promised to dedicate this achievement to him..