Enemies of Islam are Within 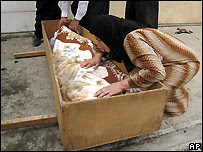 It comes a day after more than 80 people were killed in a lorry bomb attack in the northern town of Kirkuk.

Meanwhile, the political bloc allied to Shia cleric Moqtada Sadr has said it has ended its boycott of parliament.

The 30 legislators pulled out after an important Shia shrine in Samarra was bombed for a second time last month.

The bloc's head, Nassar Rubaie, said they were returning as their demands for the rebuilding of the shrine had been accepted.

The Sadrists will not re-enter the Iraqi government.

But the presence of their members of parliament could speed up the process of passing important laws, says the BBC's Mike Sergenat in Baghdad.

And the ongoing boycott of parliament by two main Sunni groups may still obstruct work on the legislation - demanded by the United States Congress.

An Iraqi police spokesman, Col Raghib Rawi, blamed the Diyala killings on al-Qaeda militants who have been fighting US and Iraqi forces in the province.

Col Rawi said the victims were members of a Shia tribe.

In Baghdad, at least 10 people, including four soldiers, were killed in a suicide car bomb targeting an Iraqi army convoy passing through Zayouna district.

The attacks come as funerals are being held for victims of a massive lorry bombing in Kirkuk in northern Iraq.

At least 85 people were killed and more than 180 wounded.

Nearly 30,000 extra US troops have been sent to Iraq in an effort to provide security for Baghdad and surrounding areas, including Baquba, the main town in Diyala province.

Bollywoods Most Wanted Whipper No1 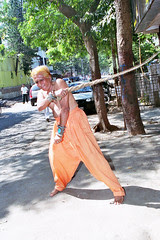 Bollywoods Most Wanted Whipper No1
Originally uploaded by flickr photographerno1
he a designer
a photographer
poet
took the whippers whip
on the road
in front of his shop
without fear of pain
a crack
a whack
on a already scarred back..
right on track

i have never done this kind of whipping in my life and this was a new experience, my shop help shot the pictures
By firoze shakir - July 17, 2007

One God One Country 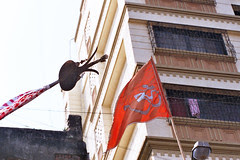 One God One Country
Originally uploaded by flickr photographerno1
There is a Sufi saying
In the plate that you eat
You don’t make a hole
Nor do you betray
The salt
Your Nation
Your Religion
Your Family
You don’t
Find fault
Or the values
Of humanity assault
Whether you like it or not
You are a human being
Even if you become an animal
You shall remain a human being by default
One God One Country Exalt
By firoze shakir - July 17, 2007

We Are Human Before We Are Muslim 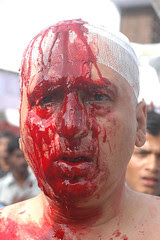 We Are Human Before We Are Muslim
Originally uploaded by flickr photographerno1
yes i was born of blood..
blood veils my face
a heritage
of my shia race
a faith in ahle bait
till death embrace
hussainiyat
time and evil tide
could not delete could not erase
karbala on my hearts living space
allah ho akbar
yazidiyat
its followers a big disgrace
the glory of true Islam of Peace and Brotherhood
you cannot replace
we live let others live
by Allahs grace
scriptures of love
that the jehadis deface
rogue mullahs
martyred misguided
descecrating the
sanctity of a masjid
a madrassa or any holy place
jehadi terrorism is out of place
give each other breathing space
dont make Islam
into Terrorist Army base
mutual coexistence
the only face saving
coup de grace
we are human before we
are Muslims in any case
only a dickhead would
call me stupid
because I bleed my face
By firoze shakir - July 17, 2007

Islam a Religion of Peace and Brotherhood 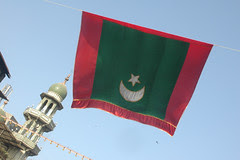 Islam a Religion of Peace and Brotherhood
Originally uploaded by flickr photographerno1
Today because of radicalism
fundamentalism, talibanism
suicide bomberism,
sectarianism.
Islam is misunderstood
but Islam is alive
as such attacks
by its own components
specially Yazidiyat
on the sands of Karbala withstood
Islam according to the Holy Prophet
was meant for the greater good
but after his death the Matrix of Evil
tried to do harm as much as it could
but a single sacrifice destroyed the sepents hood
Islam is a state of Mind and Soul
to be understood
not just a religion
of Peace and Brotherhood
says this poet photographer
most wanted from bollywood.