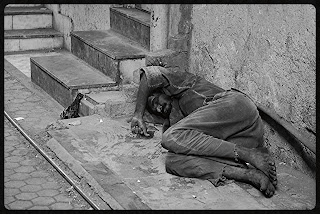 posted at You Tube community Tab


Documenting the pain agony of the Mad People on the Streets

Society has no love compassion for these burnt out human souls ..
Society and the government see thing s in the perspective of votes
so you will see a lot of shelters coming up for cows and I am an animal lover
so I have no issue but as a senior citizen I find shelter homes should be there
for these mad people on the fringe .
When I was young I remember at Colaba where I stayed a few drunks had raped a mentally challenged woman.. it hit me hard and it influenced me as a photographer I give them money but does it mean anything to them .

There is a madman at Bandra Bazar my longest documentary I give him money I dont know what he does with but I know he is not a drunkard or a drug addict .
I used to feel sorry for a young girl living in the slums I would meet her I would talk to her and she would say she would pray for me .

I am not a writer but I have shot a lot of mad people stories
I have written poems I am unpublished poet ..but I have all my poems over 10 k at Flickr .com

A lot needs to be done about these restless souls specially women and mentally deranged children.

So I shoot pictures to make people aware ,, there is no agenda no profitability in photography ,
It is a a social service with my camera and my time..

Somebody on this platform and it is mostly misguided sanctimonious Muslims that attack me with vile comments ,, he wanted to know do I only shoot beggars or do I do something for them..lol
This photography of beggars is not abbot me but about them..
We stopped slaughtering the bakra goat almost 5 to 6 years we give the money to educate slum kids ..
God knows who I am what I am...
I acted in a film I got the money gave it to the poor ,,
So however hard you hit me below the belt I refuse to be a Muslim like you ,.. my upbringing my values bequeathed by my parents were different from yours ,,and I would pray to the Almighty never to make you or your progeny like me .

My only regret those days I did not shoot videos so I shot stills and it is risky when a mentally deranged will attack you is unpredictable .
Another person on this platform said it is between God and the madman why expose them..
Show me who shoots madpeople it is not about God or the madman it is about society and the government that have to holistically start thinking of helping them bringing them back out of their dark doomed cages and bring a smile on their face ,,

How do you expect me to answer a stupid and dumb question from a person this platform who hides his face his profile ,,has no content on his channel..just Tabliki stuff to brainwash people of their Reality .
I dont ask you to become a Sufi Shia or a Christian.. I hate conversions I donr proselytize or promote any religion not ven my Shia faith..
But if you only become a Muslim or a Muslim who is getting radicalized to join the ISIS to kill Iraqis Syrians Yezdis Jews ,,
I think you need help desperately ,,,
You have no right to live in a country of your birth and destroy it
This is UnIslamic according to me ,,
Yes my Islam of Peace and Brotherhood is surely different from what your bigoted
Mullah taught you .

“Yesterday I was clever, so I wanted to change the world. Today I am wise, so I am changing myself.”
― Rumi
By Firoze Shakir Photographer No1 - January 31, 2019