My photography is awakening the Soul of Life 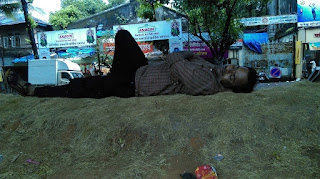 I shot these on my mobile phone beneath the Lalbaugh flyover I was not sure whether I should use my camera in the rains it was not much when I reach Lalbaugh at 7 am I had no protection no umbrella .
And I shot these people asleep mostly hawker families also the pilgrims who slept over to take the last look darshan of the Lord .
I felt one with them I had been coming for the visarjan for many years I normally shoot alone but this time I gave in to a friend Ravi Shankar and ardent student of photography..I had shot a few events with him and we shared a comfort level.
I don't shoot pictures as picturs or as blogs and if you called me a blogger I would puke all over my shirt front I renounced blogging I am a humble story teller and I have always shot a storyboard a filmy influence as I have been connected on the periphery to cinema and this cinematic influence shows on what I showcase as poetry of life .
And eventually the videos I shot and o the pictures I shot as a narrative will become a complete slide show and video on You Tube .
I try to shoot video but it is not always possible ...but I shoot my stills that they will roll out as a video .
I shot the visarjan on two cameras I have been using both Canon 60 D and 7 D since 2011..but I hardly use the 7 D ..as I have over used the 60 D .
At the moment all my pictures are bring uploaded at Flickr ..I would never post a series at Facebook but a few I also find Twitter more effective than Facebook ..here at Facebook I post for friends at Twitter and Flickr publicly .
Yesterday I shot less I was troubled by one camera ...and I move out the moment light fades as I hate using Flash .
My legs are in bad shape but it was worth the effect .
I can talk with all of you here at Facebook but can't do the same on Flickr .
This will be copied pasted at Flickr .
By Firoze Shakir Photographer No1 - September 16, 2016 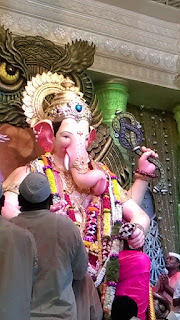 I got up at 5.30 am showered got ready to leave for Lalbagh at about 6.30 but it was in the bus I realized I had not taken my umbrella .
I was to meet my friend eminent agriculturist Ravi Shankar at 7 am he arrived but it was hard to get in and this is what hits me in the guts I have been shooting Lalbagh Chya Raja for several years the organizers at the top level know it too but yet I have to beg and plead for entry luckily I met a volunteer Ashish an old friend who helped us to enter the Pandal and both Ravi and I were wet .
We shot the Arti I shot Mr Sudhir Salvi the head honcho after the Arti and we moved out towards the main gate and somehow managed to shoot Lalbagh Chya Raja exiting from the gate .
Than we went to Hemant Sawants Ganesh color lab shot him his wife and his two ace photographer daughters Saloni and Sayali
We moved out shooting Tejukaya And Lalbagh Chya Raja on the roads ..and than took a train to VT bought two umbrella s took a cab to Girguam Chowpatty had lunch at Paramount Irani joint opposite the beach.
We reached the beach at about 5 pm and we're told that photography on the beach was banned by a court order .
So we shot from the road ..Ravi left I hung around till 7 pm than walked to Paramount again had a keema Pao the most delicious Irani fare.
I think my Canon 60 D got conked in the rains so I shot on my Canon 7D took a train from Charni Road to Bandra .
And as I reached home I shot Advocate Ashish Shelar and my friend Rohit Madhukar Gaikwad...
I also met another good friend CR Shelare at Girguam Chowpatty.
I am now downloading the picture s but I shot a few on my mobile phone ..
Today first time on a Visarjan day the volunteers allowed me take darshan of the Raja on the stage .
Verily no doubt about it the Raja is blue blood king.
Once I used to walk with him from Lalbagh to Kumbharwada but I have aged and my old legs can't do the long journey with the Raja anymore .
I have shot the Lalbagh Chya Raja for over 16 years now .
I shoot him bareeet so my legs are in real bad shape and to add to my misery is non stop running nose with a bad cold .
Jai Shree Ashtavinayaka
Lalbaugcha Rajacha Vijay Aso -
By Firoze Shakir Photographer No1 - September 16, 2016