Documenting The Rifai Silsila ,,,,The Beggar Poet Of Mumbai 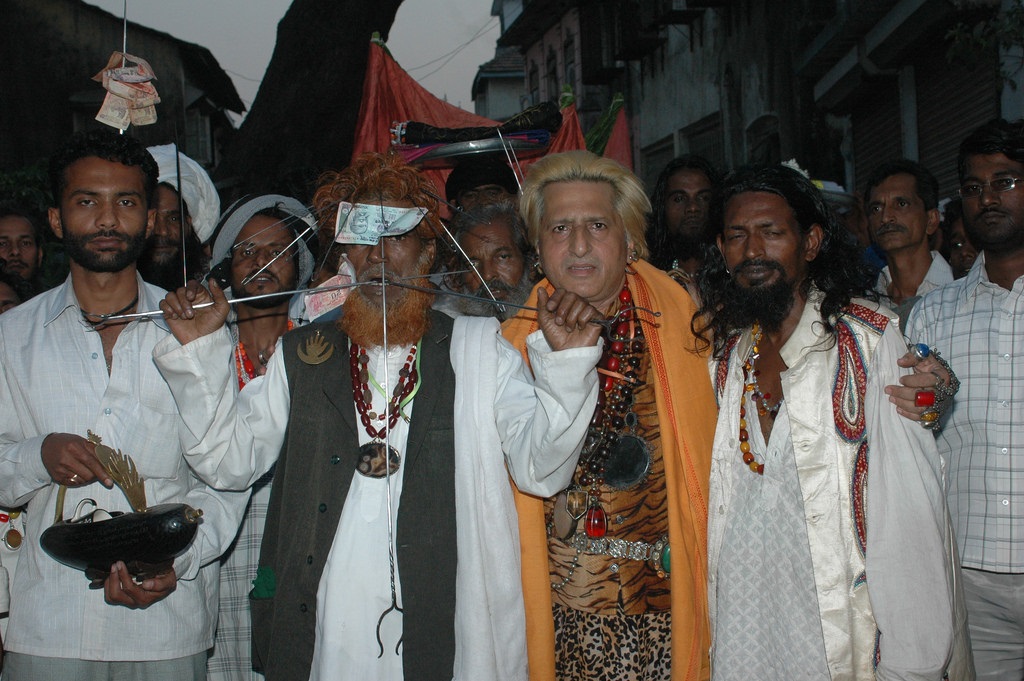 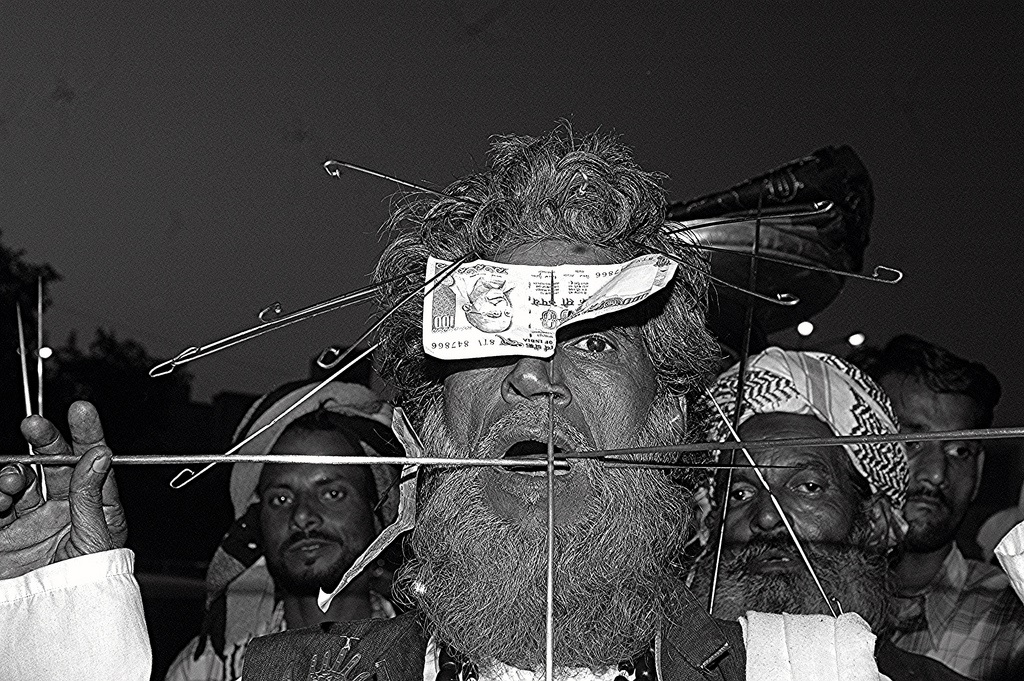 The World Of Rafaees ..Explained 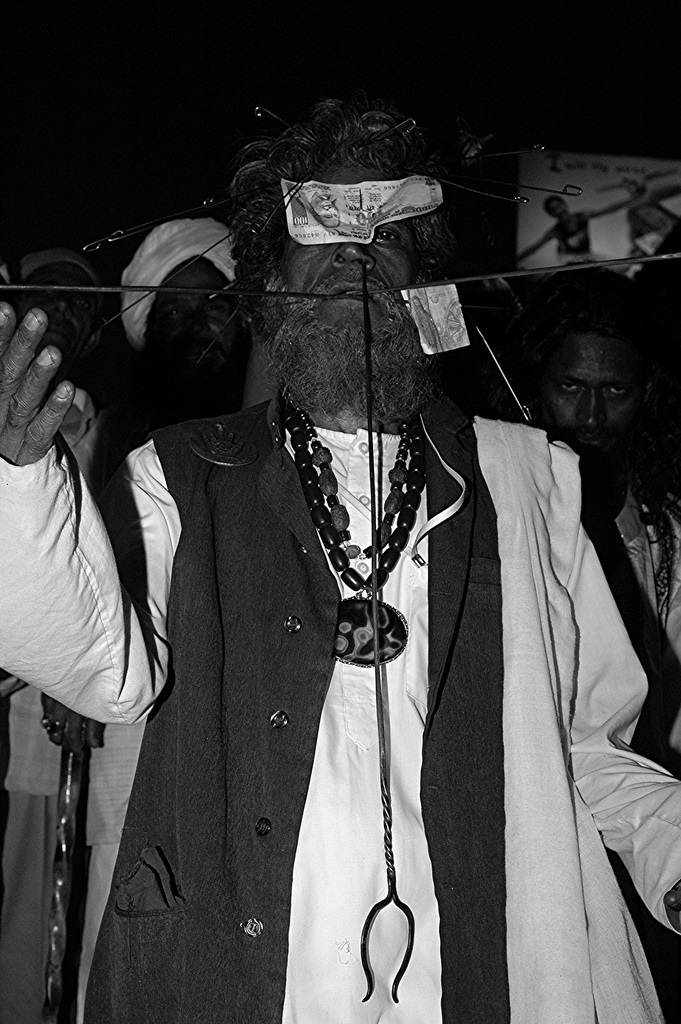 These are images of a Sufi body piercing order called Rifai Silsila, away from Rumi and great thoughts , these are very ordinary people who got tired of domesticity , perhaps married life got tired on crony commercialism , crappy consumerism.. and joined this group.

You did not need to be a scholar , and first the initiate became a Murid , and after working as a menial help moved up the ladder ..he could become Murshad too.

I began shooting the Rifais a long time back from Mahim Dhuni and was totally fascinated with their lifestyle ..they lived life on their own terms and were away from the humdrum of society.

My interest in them was photography, neither their beliefs no their mumbo jumbo  .Their acts were a performance played out to the public and that got them money to run the order .. they had rich sponsors donors , and they got their hash from the rich peddlers who came and sat with them.

Though a CC Tv camera was placed at the Mahim dargah across where they sat it did not frighten them , they went about their smoking , and the cops knew that smoking the chillum is the integral part of this ascetic culture be it Rafaees or Naga Sadhus.

Each Murshad had his Murid , disciples and a Bhandari who took care of cooking meals making butter tea all on the Holy Fire .. no stove or sigdi.

Food would be green vegetables , dal chapatis or rice ..on the day of their Sandal procession , a great day for the Rifais , they slaughtered a  bakra ..goat and there was a huge feast,

As a tribute to the Holy Saint of Mahim they offered a chaddar , embroidered bedsheet o cover his Tomb and sandal paste.

The Niyaz , the goat that was cooked as food would be eaten among themselves and distributed to the crowds and the poor.

And they would talk of old times , old stories , old Murshad and than while smoking the chillum ask me to shoot their pictures , now that I was part of their group, they trusted me and knew my background , they were cool and respectful.

They knew I would not misuse their pictures but some rogue rafaees thought I sold their pictures to foreigners ..and would be spiteful cursing me under their breath.. they tried to evict me , they almost did for one year but I was called back by Handi Sai after the death of the Murshad Sikandar Wali Bawa.

Because both Sikandar Wali Bawa and The Bhandari died tragically , the rogue elements now kept away from me thinking I had placed a curse on both their colleagues ..

The Rafaee are generally uneducated some can speak pidgin English , some are well versed in theology , but mostly they are not literate .

You can consider this order like the Fakirs of yore who did the rope trick etc.

I bought them fruits food in the evenings that I came to shoot them after work  , I gave them money for tea milk.. and  was thus able to chronicle their life ..at the Dhuni.

I have not met the Rafaees in Mumbai for a very long time though I meet them at Jalali Chowk at Ajmer Sharif where they sit ..

The Group I shot Chncawalli Rafaees has split up , and not the boisterous fun loving lot anymore .

Hassan Ganda and Farukh sit in a different group, Faiyaz Ali Bawa is a loner , and all the old faces have disappeared .

But the Rafaees know that I have become a Malang , call me Malang Baba earlier they called me Camerewale Bawa.  The Healer of The Camera.


The Bawa in Chains Zanjiwale Bawa would call me but I have not seen him since a very long time .Every time he came to Mumbai he made sure I visited him at Dongri.

The most famous Rafaee also connected to the Dam Madar Malangs is Mehboob Ali Bawa ..I hope to meet them in March at Makanpur during the Basant Panchami Mela.

A lot of Malangs and Rafaees can be found at the Kumbh visiting their Naga Sadhu friends , and you will meet Naga Sadhus at the Urus ,, this astounding amity is the most endearing part of the Sufi landscape .. promoting tolerance love and equality ,,

And so I have documented the Rafaaees Malangs Hijra Bawas and The Naga Sadhus too.. as part of my own research via photography.

I have also met foreigners among the Rafees and Malangs .. and foreigners have been initiated as Naga Sadhus too.

I have met powerful tantriks that have great respect for Sufi thought and way of life.