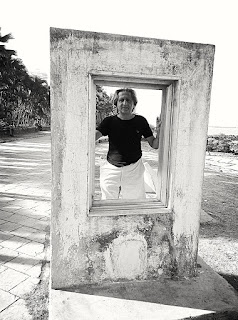 Normally I rested my feet on Sundays as there is no tennis and I hated the idea of walking ,.. but ever since I returned from Gwalior I have been walking rigorously last few days .
This morning I allowed my heart to impulsively move my ass and my feet I left my house at about 7.45 am clocking myself with RunKeeper app.. I walked from my house at Bandra Reclamation to Hill Road cut through Almeida park than Guru Nanak Park..
I kept shooting pictures on my HTC Desire 826 ..I now moved into Pali Road passed Learners Academy Road up Pali Hill .. climbed down to St Annes Church paid my respects to Saint Roque shot the Church as the Sunday mass was in progress .. than climbed up Pali Hill,..passed Boskiana Gulzar Sabs bunglow ,, than Rishi Kapoors Bungalow Krishna Raj.. passed Sameer where I have some memories of my alcoholic past , passed Metropolitan where my late friend Ravi Saran stayed .. Mr Chetan Anand lived here too,, passed Candies Union Park came out through Rizvi Complex my friend Alim Hakims salon on to Carter Road ,, the open air toilet end ,.the Koli community prefer using the sea as the toilet ..I have lived in Danpada Danda ..my first house that I lost in the 93 riots .
I used to walk on Carter Road so a lot of friends were surprised to see me in shorts as I normally wore my malang bejeweled attire .
Than I met my friend Nitin who sells herbs and soups had a tiny glass of sprout soup.. I shot a video of college kids cleaning the Carter road filthy sea front ,..posing as a beach .
Than at the other end of Carter Road touching Otters club I saw some more kids cleaning the beach.. I now passed Joggers Park.. next Chimbai I entered St Andrew Church shot pictures and a video cut across Waroda Road ..the only time I was tired on this long walk was while climbing Pali Hill ,, otherwise I had no issue ,, I now entered Bazar Road bought two maize bhuta for Marziyas java sparrows .. and reached home in 2 hours 23 minutes I had walked 9 km..
I am having my first cup of black tea ,,,as I watch Nerjis playing with her new remote control car ...gifted to her and Zinnia by my wife.
So this is my Sunday musings ... what about yours ,,,
My next goal I have done it before is walking from Bandra to Juhu and back maybe after I come back from Makhanpur ,,,anyone interested let me know ,,,
By Firoze Shakir Photographer No1 - February 07, 2016