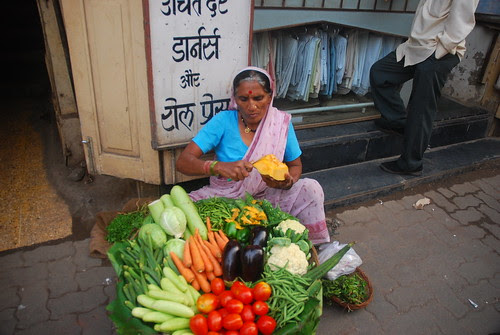 they took her precious vote
gave her four times her electric bill
hiked her water bill in fair exchange
yes politics of power is a game
very strange ..her quality
of life has deteriorated
after the election
nothing will change
for the hike in her bank loan
another loan arrange

they took her precious vote
gave her four times her electric bill
hiked her water bill in fair exchange
yes politics of power is a game
very strange ..her quality
of life has deteriorated
after the election
nothing will change
for the hike in her bank loan
another loan arrange 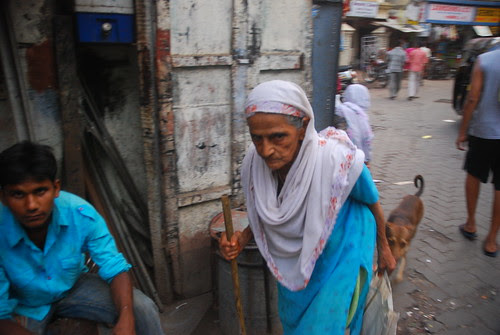 Will His Life Change After Election ? 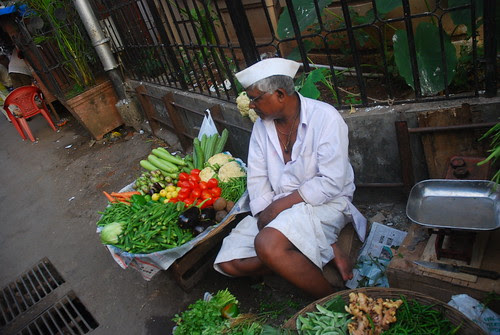 Will His Life Change After Election ?, originally uploaded by firoze shakir photographerno1.

eagles in flight
for his life
his right
they fight
so many
elections
have come and gone
he is still on the pavement alright
they have built bungalows buildings colleges
but his future his childrens future
still out of sight ..
flip side of democracy
in black and white
a candleless hope
a reliance
that rips him for light
his destiny
weeps tears
at midnight
marathi manoos
caught in a cross fire
no respite

Marziya And Her Favorite Goat

Most of the goats at Bandra Bazar Road know Marziya on first name basis, she feeds cabbage leaves to her favorite goat, he is a very lucky goat ,the kids call him Sharukh affectionately, he was to be slaughtered last year for a wedding , but the person to whom he has been sold since birth changed his mind..(he was to slaughtered for his daughters wedding reception)

There is another black goatee beard the kids call him Big Boss.He is the star attraction , but was not around when I shot Marziya with Sharukh.

He loves biscuits and searches Marziyas pockets without harming her at all, there was the Mother goat that shook hands with Marziya , she and her kid have been sent away to live with a family in Malad.

The moment Marziya comes out on the streets all the goats within the vicinity rush towards her , each vying for her attention .

Marziya has a very special bond with these goats , most have grown with Marziya..except for one or two who are much older than Marziya.

Their Future Lies in Our Hand 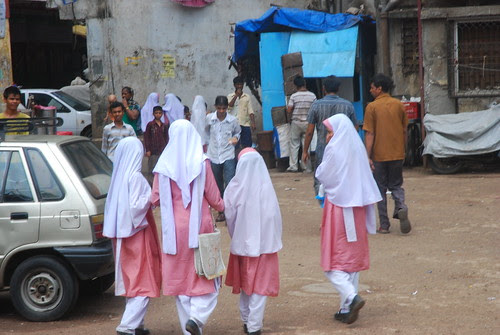 Their Future Lies in Our Hand, originally uploaded by firoze shakir photographerno1. 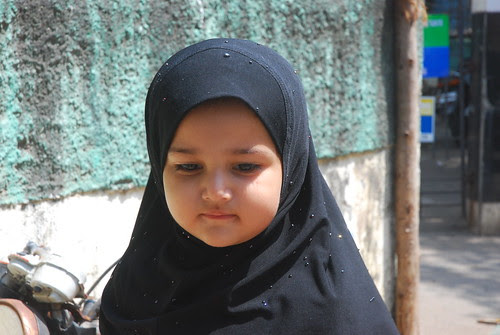 Makhna is the head scarf that little Muslim girls wear to cover their heads as per Islamic tradition..as they grow older it is the Hijab or the chadar.

Marziya is my 23 month old grand daughter .I began shooting her from the second day of her birth 24 Oct 2007.
Marziya got her name from her parents , Marziya means Allah Be Praised ..and is also a name of the Holy Prophets daughter Princess Fatima or Jannabe Syeda.

Marziya is comfortable with the Makhna but as it is polyester base it gets hot and so she removes it after some time..

Marziya uniquely changes with what she wears , she can be a tomboy or a cute Muslim girl..at 23 months old she knows most of the by lanes of the Bandra West slums , she knows every path that leads to Rajiv Nagar, Indira Nagar Hanuman Nagar or Khoka Chawl..

She knows most of the denizens too..she knows the Fish Market , Shia Mosque , the Umbrella lady, but one person I want her to meet is Appu the limbless guy who begs at Mahim.

Marziya knows most of the tuition classes that are held at homes in Bandra .

Lucky the Labrador is her friend Lucky will not touch Marziya but acknowledge her presence from far, , she loves goats , cats and hens..

Riding horses at Almeida Park is her favorite past time.

She can use my Nikon D 80 with some help from me , and she knows how to measure you for trousers or shirts..

Being born in a Shia family she is totally tuned with her culture and does Matam on the Shia days of mourning..

The amazing quality she has a total camera eye that takes me by surprise..

She loves my jewelry , my head gears and has her own Press Card too..

Her favorite at home she cant do without ever is her Uncle Saif next Assad and my daughter Samiya.

She likes me as I take her around the world that is Bandra ..she is adept with my comp as is adept with her fathers lap top.. she knows most of the commands..

At this young age she has seen all that I have shot , hung on my waist..nothing scares her..I have yet not taken her to a pool or the zoo..

Marziya has her own gmail account,her own website..but she will have to wait a bit longer to come on Facebook..

Marziya recites nohas , she prays with open hands for me at the House Imambada ..Allah Dada Ko De..God give my grandfather ..than she will say Paiche that means Money..in her lingo..

Yes with Marziya we all have been blessed ..

Next month she will turn 2. 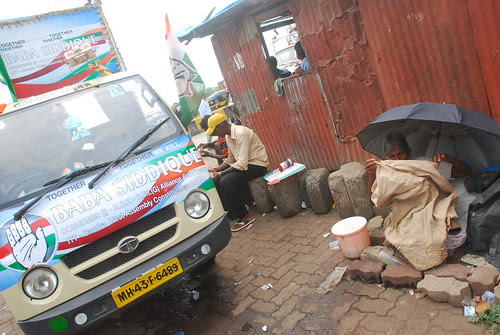 Ever since I shifted to this area , I have been observing and photographing this womans plight,this poor destitute homeless , lives under an umbrella , I have shot her having a bath without degrading her womanhood..I shot her back she was wearing a sarong, I have never seen her stand up at all.. where she goes for call of nature I dont know..

She is the first lesson in Charity I taught my 23 month old grand daughter Marziya..Marziya will nudge me as I pass her , take Rs 10 from my hand carefully ,cross the puddle and politely hand it over to her..Marziya with her child s mind understands..

During heavy rains , like one last night she sits there under the umbrella ..she does not talk, she does not complain , I am told she renounced her affluent status in life , her family I was told stays at Dadar

Is she a Hindu or a Muslim or a Christian does not matter ..Not a single Christian mission like the Sisters of St Theresa who take care of the beggars on Hill Road Bandra have ever passed here ,,, No Hindu or Muslim either..

This is a place where a few steps ahead stays a heavy weight political bigwig , he passes by every day but he will never notice her , we only notice good things in life..they might have noticed her if she was nubile or naked mad.. but than she has been saved that dishonor..

Well this is the quintessential flip side of the dead soul of Mumbai and the Umbrella Lady of Bandra Reclamation.... 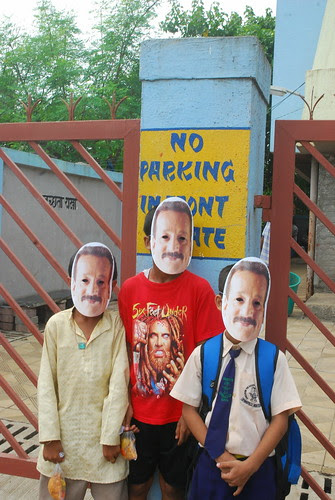 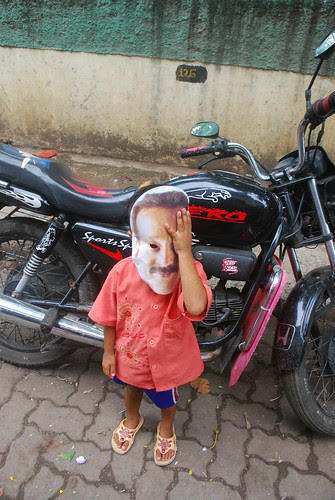 No Not Again ..., originally uploaded by firoze shakir photographerno1.

The chaos of searching for the right party , the right person continues to form a new government at the State level in Maharashtra..as I stay at Bandra I shot my first pictures today , I came in pretty late as the candidate of the Congress Party Baba Siddiki had already left..

His party members had distributed masks to the kids , women of the area. 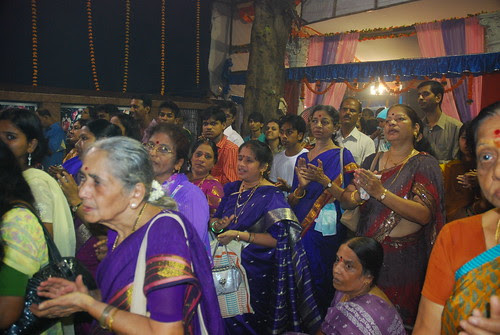 These are pictures I shot on 27 Sept 2009 on my way home barefeet from Shivaji Park Ramlila to Mahim junction , I shot a few frames of this Durga Pandal at Sitla Devi..the most popular pandal on this road.

Aarti is generally performed one to five times daily, and usually at the end of a puja or bhajan session. It is performed during almost all Hindu ceremonies and occasions. It involves the circulating of an 'Aarti plate' around a person or deity and is generally accompanied by the singing of songs in praise of that deva or person (many versions exist). In doing so, the plate itself is supposed to acquire the power of the deity. The priest circulates the plate to all those present. They cup their down-turned hands over the flame and then raise their palms to their forehead - the purificatory blessing, passed from the deva's image to the flame, has now been passed to the devotee.

The aarti plate is generally made of metal, usually silver, bronze or copper. On it must repose a lamp made of kneaded flour, mud or metal, filled with oil or ghee. A cotton wick is put into the oil and then lighted, or camphor is burnt instead. The plate also contains flowers, incense and akshata.[1]

The purpose of performing arati is the waving of lighted wicks before the deities in a spirit of humility and gratitude, wherein faithful followers become immersed in God's divine form. It symbolises the five elements: 1) space (akash), 2) wind (vayu), 3) light (tej), 4) water (jal), and 5) earth (pruthvi). Communal Aarti is performed in the mandir; however, devotees also perform it in their homes.

Hinduism has a long tradition of aarti songs, simply referred to as 'Aarti', sung as an accompaniment to the ritual of aarti. It primarily eulogizes to the deity the ritual is being offered to, and several sects have their own version of the common aarti songs that are often sung on chorus at various temples, during evening and morning aartis. Sometimes they also contain snippets of information on the life of the gods.

The most commonly sung aarti is that is dedicated to all deities is Om Jai Jagdish Hare, known as "The Universal Aarti" and is another common aarti song. Its variation are used for other deities as well such as Om jai Shiv omkara,Om jai Lakshmi mata,Om jai Ambe gauri,Om jai Adya Shakti.

In Swaminarayan Mandirs, Jay Sadguru Swami is the aarti that is sung. In most temples in India, aarti is performed at least twice a day, after the ceremonial puja, which is the time when the largest number of devotees congregates.

Aarti performed at South Indian temples mostly follows the above-mentioned rituals except that they are often more elaborate in the way they are performed. Aarti is also referred to as Deepa Aaradhanai in Tamil.
[edit] Aarti in Gaudiya Vaishnavism

In Gaudiya Vaishnavism, aarti refers to the whole puja ritual, of which offering the lamp is only one part. A conch is blown to start the aarti, then an odd number of incense sticks are offered to the deity. The lamp is offered next, and then circulated among the devotees. A conch is then filled with water, and offered; the water is then poured into a sprinkler and sprinkled over the devotees. A cloth and flowers are then offered, and the flowers are circulated to the devotees, who sniff them. The deity is then faned with a camara whisk, and a peacock fan in hot countries.