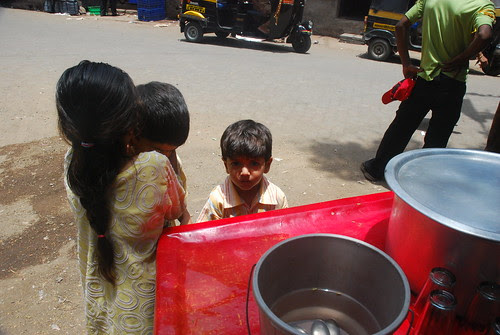 Close to my house is a cart that belongs to the Bandra Bazar IceGolawala..who sells Ice Golas and Limbu Pani, or lime sherbet..an array of bottles with colored essence.

Our Bandra Bazar Road Ice Gola wala is a UP Bhaiyya ..from North India a maligned lot due to parochial politics of self gain and convenience...but he shows no sign of regret.. he is a part of a childs growing up.. from one generation to the next.
Be it Fred in Texas or me or my kids we have tasted the ice gola after a hectic game of cricket.

Now one day another Ice Golawala backed by the local hoodlums , muscled in and threw our Ice golawala out from his regular space , the poor guy moved on to a side lane that is extremely hot without shelter, but his clientele did not leave him, they followed him here.
In the mean time the new Icegolawala had no business and finally deserted his post, the locals bought the old guy back.

In all this stress our Ice golawala cut his palm very badly on the ice shaving machine on the cart, I told hm to take a septic shot and dressed his wound every day at my house.

His hand healed , and he has great respect for me loves Marziya.. though we dont eat ice golas or drink ice lime sherbet.Mind you he is clean hygienic.. but I cant take chances with Marziya..

Instead I shot some frames and told him, that he is going to be seen by everyone in the world..a thought that made him happy..

Now because the hot shot media photographer wont highlight stories of the Am Admi the common man God created the photo blogger and blessed him with a pedestrian humility too.. that with due respect to Fred Miller I have tagged as street photography..

And on a second thought without Fred Miller I might have been lost in the woods..he is there helping us out with new stuff, it was Fred who recommended me to Now Public...an experience that has come in handy in learning the ways of the world.. had I posted this story at Now Public..it would have been flagged either by Jarrett or Tina Kellis..erstwhile editors, as not being up to the mark, they would question, what is so news worthy about this story, and this is a fact ..a bias exists for the colored man in a white mans world..do read our terms and guidelines on posting a new story..blah blah ha ha ha ...

But than Fred would recommend this story so would Nauman , or Cypresso or Esta or Uwe..not because of its newsworthiness because it is a tale of a child's happiness costing Rs 1.. the price of a icegola or the lime sherbet.. cheaper than the newspaper too.. in Mumbai. 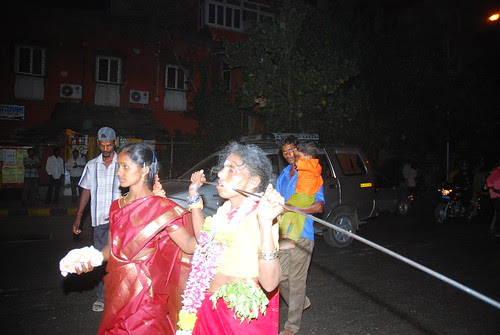 This ends a 1121 picture story board of this enticing series on street spirituality as seen from the eyes of a street photographer , shooting pain and pathos of the Tamil diaspora in Mumbai.I cut shot this event as my feet ached, I shoot barefeet and this was a very long trek from Mahim beach where it began to the Maryamma Temple of Macchimar Colony Mahim where it ends..I could not shoot the segment of removing of the rods and the hooks.

The Hindu Tamils of Mumbai who owe allegiance to Goddess Maryamma are in total awe and reverence to this deity and the pain that is part of their spirituality performed on the beach..in public.
Pulling vans with hooks on the backs, rods pierced in their mouth is part of a Thaipussam like ethos - but is not Thaipussam at all.. only the rituals are almost similar.

I was going to pierce my cheeks too, but backed out at the last minute as shooting the pictures was my first priority and this would not have been possible.

Piercing my body cutting my head with a sword as I do during Moharam has never scared me, I have had friendly relationship with Death having seen it eye to eye many a times..When my time comes I shall happily go..leaving behind a part of me on the cybernet.. the bulk being on Flickr.