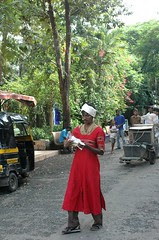 Drunken Madness
Originally uploaded by flickr photographerno1
his wife ran away with his best friend
hundreds thousands on her he had spent
it was love well meant
than came the blow the dent
he began to hit the bottle
maudlin moroseness
drunken madness
could not prevent
the inner guilt
his fall from grace
his abysmal descent
her parting
blow after blow
the soul and its lament
man was born to suffer
victim of a womans treachery
killing him softly
100 percent
she who has found
a more sexually satisfyng
more moneyed
replacement
By firoze shakir - September 20, 2007

Lord Ganesha and the Shia Pandit 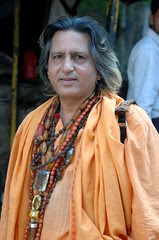 Lord Ganesha and the Shia Pandit
Originally uploaded by flickr photographerno1
Since morning I shot the various pandals in Bandra, I started with the Miracle Ganpati offf Ram Mandir Road, Bandra Bazar, from there in the rains to Sudesh Dubeys Shiv Sena Ganpati spiritually sculpted as the Sai Baba of Shirdi..as I walkd out from here I stopped at the Jari Mari temple where my friend art director Chetan is the trustee ,,shot the pictures met the Hijdas of the Linking Road Traffic Signal, than headed for my shop.
Later at 3.30 pm, I mved homewards shooting the Elco Market Ganpati, The Gosalves Wadi Ganpai of Chinchpokli Road..
Rested left for my shop at 5 pm, caught up with the Turner Road Traffic Signal Hijdas,..and here I am..a digital camera does not give you rest , always capturing the unseen and giving an added extension to its life on the Internet..
By firoze shakir - September 20, 2007 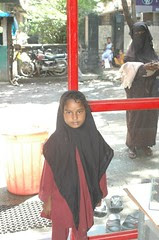 Muslim Poor Women in Ramzan
Originally uploaded by flickr photographerno1
The heat and dust
The Ramzan fast
Is a must
No hunger
No thirst
Allah
His Holy Month first
But for the begging Muslim Woman
Her little child in her arms
A growing daughter
Life is accursed
Protected in her Hijab
Endangered specie
it could have been worst
the hypocritical Male dominated
Muslim society nonplussed
being born poor
living poor
dying poor
is a blessing in disguise
more than a curse
life a living hearse
everlasting sorrow
that time and tide
will dare not nurse
living off charity
from another mans purse
By firoze shakir - September 20, 2007 Sudesh Dubey Shiv Sena Ganpati
Originally uploaded by flickr photographerno1
Mr Sudesh Dubey is the erstwhile shaka pramukh of Shiv Sena Bandra Hill Road, he is an upright man, who leads from the front, aalways helping people of all communities, his Ganpati is a landmark at Bandra Talao..the entire atmospere is serene pervading with a spiritual calm, and here Lord Ganesha in the avtaar of Sai Baba of Shirdi..This is worthy of a visit with paintings of the Holy Saint...
By firoze shakir - September 20, 2007 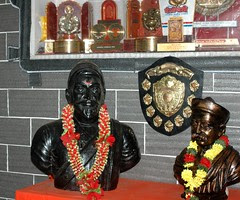 Chatrapatti Shivaji Maharaj
Originally uploaded by flickr photographerno1
The Warrior KIng the Pride and heroic spirit of Maharashtra greets you when you enter the Shiv Sena Pandal of Shaka Pramukh Sudesh Dubeys Ganpati at Bandra Talao, next to him the freedom fighter Lokmanya Tilak...


He founded the Hindu kingdom in the Deccan against all odds , fighting against the mighty Mughals.He inspired and united the common man to fight against the tyranny of Mughal ruler Aurangjeb, by inculcating a sense of pride and nationality in them.

At the age of 16, he took a pledge to establish a sovereign Hindu state.He clearly outstands all the rulers and generals of India by the exemplary life he lived and is thus respected by the entire cross section of Indians. Shivaji's military skills could be compared to those of Napolean.

He raised a strong army and navy, constructed and repaired forts, used gureilla warfare tactics,developed a strong intelligence network,gave equal treatment to the people from all religions and castes based on merit, and functioned like a seasoned Statesman and General. He appointed ministers with specific functions such as Internal security,Foreign affairs,Finance,Law and Justice,Religious matters,Defence etc.

He introduced systems in revenue collection and warned the officials against harassment of subjects.He thought ahead of times and was a true visionary.In his private life, his moral virtues were exceptionally high.His thoughts and deeds were inspired by the teachings of his mother Jijabai,teacher Dadaji Konddev,great saints like Dnyaneshwar & Tukaram and the valiancy and ideals of the Lords Rama and Krishna.

The tiny kingdom established by Chhatrapati Shivaji known as "Hindavi Swaraja" (Sovereign Hindu state) grew and spread beyond Attock in Northwest India (now in Pakistan)and beyond Cuttack in East India in course of time, to become the strongest power in India. After the death of Chhatrapati Shivaji & his son Sambhaji, their prime ministers or ‘the Peshwas' became the defacto rulers. The Peshwas and the Maratha Sardars (Chieftans) like Shindes of Gwalior, Gaekwads of Baroda & Holkars of Indore contributed to the growth of the Maratha Confederacy.

The history of India is incomplete without the history of Marathas and Shivaji is the nucleus of Maratha history. Shivaji has been a source of inspiration and pride to the past generations and will continue to inspire generations in future. We salute this legend and humbly dedicate this website to him. Miracle Ganpati off Ram Mandir Bandra( W
Originally uploaded by flickr photographerno1
Normally I tend to take a lot of shots here I took only two...and you can seee the impession that nature has created a kinf of moisture impression while the wall was being painted..
By firoze shakir - September 20, 2007 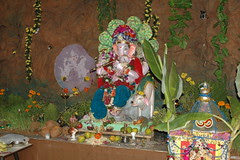 Miracle Ganpati off Ram Mandir Bandra( W)
Originally uploaded by flickr photographerno1
This morning I continued shooting the few pandals I shoot every year, this is a Pandal, where the Shia Mehfil is situated close to my old house Kamlabai Sadan..
This compound and the entire propetry belongs to a kind Gujrati family.
The wall has an impression of Lord Ganesha that has come by itself, while the wall was being painted, and today is the 12 th day I am told, the impression has not gone ..the electronic media is expexted today.
I have copied the entire 2 mb file directly from my computer , no photoshopping,,, nothing..
By firoze shakir - September 20, 2007 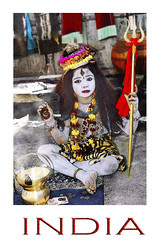 Wordpress has comment moderation
Blogspot has comment moderation
delete publish commment
whatever you opt for
but here at Flick I am a Pro
a Us $47 Flickr Whore
Everyone comes fucks me
leaves an anti Shia comment
and my ass is sore
they want more and more
after each sick comment
my sphincter muscles tore
anjali, sabiuallah
they shit defecate and go
on the multicolored ass
of this Flickr Whore
And Flickr management
should show these fuckers the door
but Flickr is happy filling its coffers
they know the score
Comment moderation
they simply ignore
essentially a fundamental right
of this Flick entertaing Whore
here honestly I am not
enjoying it evermore
my photo stream
an open door
come fuck me
comment moderation
flickr is not responsible for
they want you to buy pro membership
to your most notorious tormentor
my ass is not my anymore
says this fucked flickr whore

I WANT TO BE A JEHADI TERRORIST 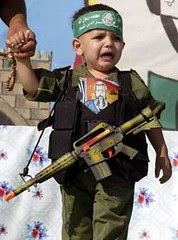 
As I write this I have pictures of Bara wafat, where Sunni Muslim kids on the Holy Prophets birthday carry cracker guns that look like Ak 47, faces masked, and the elders not saying a single word.. yes its a fun thing being a terrorist..
This is what I see on the streets of Mumbai on this auspicious day, I stopped shooting this segment completely...

The Turner Road Traffic Signal Hijda/NIKON D70
Originally uploaded by flickr photographerno1
I had shot this picture of this Hijda a few months back the next shot the Nikon D70 went dead on me , and now after alll these momth Subash has given it back to me as nobody wants a fucked up camera, a camera that has filled the coffers of a blood sucking Nikon company, and they dont feel bad about it at all, as they are heartless to the consumers problem, I think Nikon is the worst Japanese company, it is all about big bucks, and conning the general public.
They knew this model Nikon D70 sold in India has evere technical defects but they never withdrew it from the market, they paid us Rs 7000/ that was deducted from the first repairs where I paid Rs 10000, and I contuinue paying it each time it dies on me...
I think I would be happier shooting with a mobile phone than the Nikon D70...
So use your head, play it safe buy a Canon...and dump your Nikon in the nearest gutter if you can...
And the Nikon techs who read this pretend they dont know English.
NIKON D70 DIGITAL DISASTER MOST FUCKED CAMERA OF THE CENTURY...
By firoze shakir - September 20, 2007