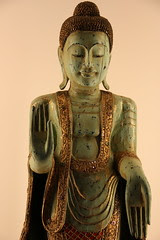 "Where ignorance is our master, there is no possibility of real peace.


Buddha Purnima
Buddha Poornima, which falls on the full moon night in the month of Vaisakha (either in April or May), commemorates the birth anniversary of Lord Buddha, founder of Buddhism. Notwithstanding the summer heat (the temperature routinely touches 45 degrees C), pilgrims come from all over the world to Bodh Gaya to attend the Buddha Poornima celebrations. The day is marked with prayer meets, sermons on the life of Gautam Buddha, religious discourses, continuous recitation of Buddhist scriptures, group meditation, processions, worship of the statue of Buddha. The Mahabodhi Temple wears a festive look and is decorated with colourful flags and flowers. The Chinese scholar, Fa-Hien has recorded celebration of this festival.

It is an important to give a summarized description on the Buddhist festivals in India, especially in the main places of worship. The principal annual ceremony for all the Buddhist is the Vaisaka Purnima known in Sri Lanka as Wesak festival and in India as Buddha Jayanti. Vaisaka Purnima day is fixed by the full-moon day of the month Vaisaka, which falls in May. Like all other Buddhist festivals it falls according to the Lunar year. It was of this day of the year, according to the year.

He attained Supreme Enlighten or Buddha hood, beneath the Bodhi-tree at Boddha Gaya. Forty-five years later at the age of eighty, he finally passed away in Parinivana on the same day of the year at Kushinagar. Vaisaka Purnima is celebrated especially in Boddha Gaya, Lumbini and in Kushinara as they are the holy places that were connected with the blessed ones birth, enlighten and the Parinirvana. Buddhists in Sri Lanka, Burma, Thailand, Tibet, China, Korea, Laos, Vietnam, Mongolia, Bhutan, Cambodia, Nepal, Japan and quite a number of western Buddhists participate 'Vaisaka' Purnima Day religious activities in a festive mood. Sarnath the capital of Buddhism too celebrates Vaisaka Purnima day in a grand way.

The great Buddhist festival 'Vaisaka' ,although is an occasion for rejoicing doesn't encourage hectic gaiety and abandon. The happiness that the Buddhists feel when they are celebrating it is a tranquil, peaceful joy. The festival has its gay side as well. In most of the Buddhist countries the villages, roads, streets, temples and houses are brightly illuminated with color Lanterns, electric lights and colorful decorations.

Marziya Shakir Birth of a Street Photographer , a set on Flickr.

Fuck The Freedom of The Press 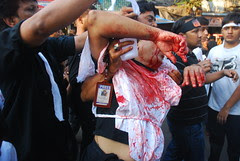 Fuck The Freedom of The Press, a photo by firoze shakir photographerno1 on Flickr.
By Firoze Shakir Photographer No1 - May 06, 2012 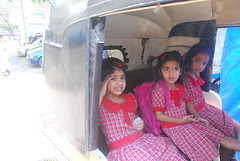 Firoze
Knowing you has been an enriching experience. People who have not interacted with you have missed something in their humdrum lives. Am fortunate to have had the privilege of knowing you.
Thank you,

Best regards to your family

I met Deepak face to face at the IndiBloggers meet at Sea Princess and we had never met before that though he stays perhaps 20 minutes away from my house in a lovely jade garden of eternal poetry.

I visited Deepaks house two years back and paid Darshan to his house Ganesha..

So Deepak has been a great source of inspiration , he is one of the most versatile metrobloggger of our city and his pictures are nostalgic soul searching speak volumes of his passion for street photography.

Deepak is a doting father a great human being one of my best cyber pals .. he has not visited my house is the only grouse I hold against him..and perhaps he has his own reasons for not visiting me ..but all in all he is a wonderful warm kindred soul..

I Would Rather Be a Hindu Than Be a Wahhabi 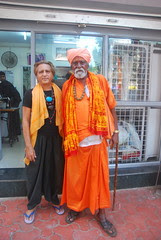 I Would Rather Be a Hindu Than Be a Wahhabi, a photo by firoze shakir photographerno1 on Flickr.
By Firoze Shakir Photographer No1 - May 06, 2012