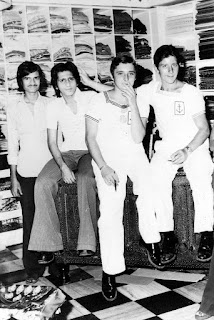 I had learnt French under Monsieur Alain Ficat at the Alliance Francais Dhanraj Mahal my classmate was late Mr Leybourne Callaghan ,, or Callaghan of India , head of Roche Products and later Irish Consul based at Yacht Club I made his dapper suits and attended his funeral too.
I had lots of French friends and these were my happy times at Sheraton Treasures branch of Burlingtons Taj..
Met lot of Hollywood stars Jim Brown Gregory Peck Roger Moore and the owner of Metro Goldwyn Mayer ,,and now all that remains are memories
Making suits of JRD and DRD and driving Bul Bul Master nuts ,,we had the cream of clientele ,, HH Prince Agha Khan His Royal Highness Shah of Iran all patronizing Burlingtons those days our first school of fashion designing under Mrs Gaby Kapoor and Mrs Jennifer Kendall and later Ms Sunita Kapoor nee Malgaonkar .
By Firoze Shakir Photographer No1 - November 12, 2015 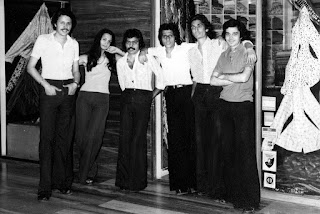 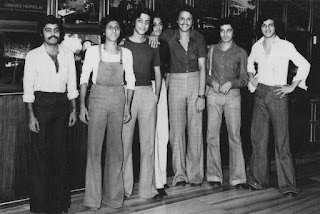 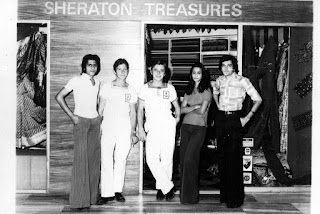 I began my career at Treasures of India Dhanraj Mahal with Mrs Gaby Kapoor as I spoke French and was a glib talker I was posted to the main Burlingtons outlet and I did a long stint and was transferred to the Oberois and this was perhaps the best time of my life ,, Sheraton Treasures partly belonged to Mr Shashi Kapoor and his wife Jennifer Kapoor my Guru of styling.
My years at Sheraton Treasures were most nostalgic ,, Bobby Ahluwalia gave us free drinks at Lancers Bars , the Cellar was our hideout after work..
And Lorraine Rhubbotom was my assistant manager , we were a very close group Arjunsinh Jadeja at Dancing Silks and some friends from Maharani ,,
till I decided to go to Lucknow to heal a broken heart my salary was Rs 750 I accidentally got married and the next thing I knew I was again transferred to Taj Treasures and my salary was raised to Rs 1100 in 1978 ,,,
I hung around for two more years and than left for Muscat in 1980 , I left my job at Tecodev and took up a job as a manager at Al Anwar and returned back before my term ended dejected disappointed ..
I joined Badasab Bandra 1982 and a stint with Prachins of Mr Nitin Manmohan and my tryst with Bollywood .. in real sense .. it was there at Badasab too,
Than I became independent and again joined Badasab as GM in 2011 but could not work there I was used to freedom and being my own man .
So in short I have come a long way ,,,
Memories of Oberois and memories of Ken Lynn society photographer who shot all these pictures and charged us Rs 50 those days ,,,memories of Mr Dieter Janssen Rita Palitana .. we made her sexy cholis and Joan Paez ..
By Firoze Shakir Photographer No1 - November 12, 2015

Email ThisBlogThis!Share to TwitterShare to FacebookShare to Pinterest
Labels: 1976 77, My Memories of My Stint at Sheraton Treasures 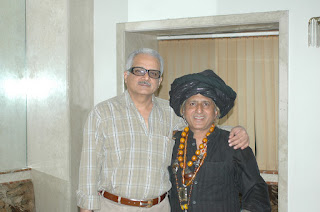 
I could never blog without a picture but I do experiment sometimes here at Facebook,.. where a blog post originates instead of Flickr ,,
So I am adding the text of my old post on this image of my childhood friend Ramesh Mulchandani.. this was the second part of my childhood when we moved from Wodehouse Road to Breach Candy to Strand Cinema and my ama mater where Ramesh and I studied at Holy Name High School.
The first part of my childhood was Khatau Bhuvan ,, Jony Castle Wodehouse Road ,, my friends at that time were Keith Kanga , Vimal Patacharige , Ray Framroze ,,Ray and I survived ,, Vimal and Keith passed away.


As a child growing up at Wodehouse Road Colaba it was a Hindu lady who bought us up an integral part of our household my mother was an asthamatic and this lady took care of my sister my brothers and me .We respectfully called her Aiee which means Mother after our Mother it was Aiee who dressed us up for school fed us put us to bed.She spoke to us in Marathi as she was not conversant in Hindi and stayed with her son Tulsi at a servants quarter at Military Quarters across our house .So in a way she was part of our upbringing she molded us with stories from the Ramayana and Mahabharata and more than her own son she loved my youngest brother Zaheer he was her lifeline she carried him on her waist giving in to his whims and the other person crazy about Zaheer was Ms Akthar Baji daughter of late Nawab Kashmiri we were tenants of her royal grandmother related directly to Nawab Wajid Ali Shah.
But this memory is of Aiee and perphaps today we are what she made us my sister's brothers till this day are products of her teachings .
So now you know my fascination for Hinduism it was the second religion that lived side by side in our Shia home .After Aiees death my mother still trying to cope with her poor health bought us a new Maid her name was Mary her husband worked for Ajanta Arts of Mr Sunil Dutt sab and with Mary began our Catholic influence completely so now Jesus to came to live in our house .Mary took us to Sunday mass at St Jospehs Chapel close to my school Private European school .Mary's husband lost his job when Reshma aur Shera bombed but even after leaving our job Mary never forgot us she kept visiting our new house at 3 Mohini Mansions and her visits stopped after my mother died .
So these are early morning stray thoughts and with this I wish all my friends a very Happy Happy Hindu New Year .
I owe a lot to them and here one name stands out from the rest my childhood friend connected to me since 50 years he made me half Sindhi I spent most of my childhood at his house at Garden Road my only friend who helped me financially morally and the house I live in at Bandra is because of his help .He is my brother Ramesh Mulchandani owner of Strand Hotel opp Radio Club .Without him and his cousins and friends I would not be half what I am today .They added the goodness of Hope and Hindutva in my Shia heart .
Do I regret not having Muslim friends well I only had friends I was destined to have Anglos Jews Parsis and a Sri Lankan Buddhist and a crazy Jheovahs witness with a crazy grandmother my best friend Keith Kanga of Atomic Fores
By Firoze Shakir Photographer No1 - November 12, 2015 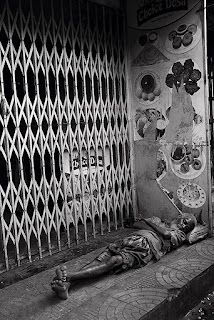 groomed
nurtured
on your
charity 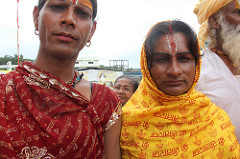 They saw me dressed as a Sadhu and they saluted me with Namaste and Jai Shree Ram and respectfully touched my feet and asked me to bless them I did ,,with my camera too..

They saw I was tired , barefeet so they gave me Rs 51 ,. I was politely refusing the same but they insisted ,, please have food .. and I accepted their offering as a beggar poet ,, I later gave the same money to a very poor beggar family ,,

And I had restricted these images I shot a lot of pictures of these kind hijra ladies from MP who had come to  Ramkundh and Tapovan on pilgrimage to the Nasikh Kumbh.

I had shot hijras taking a dip in the Ganges during the Maha Kumbh Allahabad , and I am destined to meet them wherever I go ,,and I meet them begging extorting money in the trains ,,I have shot a lot of them..

But there are pious ones I have shot Hijra Jogans and Hijra shamans ,,

Perhaps God wants me to tell their story the travesty of their misplaced Gender and I shot them with respect with humanity and sincerely ,,

Do they celebrate Diwali ...well they celebrate Eid too and I knew some who wore black clothes in memory of our Imam and were devout ,, and bonded with me as an Azadar Of Hussain..

There is a lot of transgender  in Hyderabad who do Matam , majlis take out Tazia but I  have not met them though I met one in Kolkatta Ashura crying profusely on Ashura day dressed in Black.

Email ThisBlogThis!Share to TwitterShare to FacebookShare to Pinterest
Labels: Do Hijras Celebrate Diwali...

Street Photography Is Not What You Shoot It Is What You See .. Cosmically 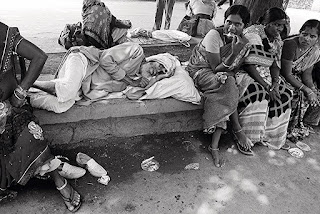 Its been 3 months since I accidentally came to Tapovan Nasikh Kumbh.. from Trimbakeshwar where I was staying with my Naga Guru Shree Vijay Giri Triveni Juna Akhara ,, I was  about 6 km away from the main Trimbakeshwar town and was sick and tired shooting people sadhus where I lived ,, so early morning before the  29 August Shahi Snan I took permission from my Naga Guru and left for Nasikh Ramkund and than Tapovan.. barefeet ,,

I could have gone on shooting Tapovan but I had to return to Trimbakeshwar before the roads are blocked .. and could not imagine walking miles back to my Gurus tent .

I tried very hard to get back to Nasikh Kumbh but it never materialized , my business was down , and lots of work problems ,,, but now in retrospection I think I have yet to get over the Allahabad Maha Kumbh 2013.. I miss it till day ,,

Nasikh can never be Allahabad ,, just not possible ,, and the Ganga Jamuna Saraswati.. Sangam.. Secto4  of the Naga Sadhus Juna Akhara ,, I lived at Sector 5 .

I have restricted the Maha Kumbh set from public view only Flickr members can see it because of the Naga Sadhu frontal nudity ,,

Even in terms of street photography there was an untapped landscape of people to shoot at the Maha Kumbh.


I have never been to the Ujjain Kumbh so I dont know much about it ,,