A two-year-old boy has duped the art world by selling his work on the adult section of Saatchi Online.
For his first work Freddie Linsky used tomato ketchup, as he scrawled on the table of his high chair.
'Not since Titian has a single particular colour had such an effect on me, ' the gallery quotes Freddie as saying of the paint used in his work Leonard III. 'If Titian used blood for his reds, then surely sunshine was used for this yellow.'
His piece was striking enough to arouse the attention of a Manchester artist and collector, who bought one of Freddie's works for £20.
While the work is entirely the toddler's, the captions are composed by Freddie's mother, Estelle Lovatt, a lecturer at Hampstead School of Art and freelance art critic.
The artist Tracy Emin is already said to be captivated by this young prodigy - his mother says he's known among established Artists simply as Freddie.
© Independent Television News Limited 2007. All rights reserved


She pretends she is angry with him
Each time says the chapter is closed
She gets uppity she gets morose
But in the crevice of her heart lives
The dark side of the Moon
Her beloved Firoze
The guy who walks barefeet
Wears Sufi clothes
Lots of jewelry
And a beak of a nose
A rose by another name
Or by four others names
Can it be Firoze?
Into her dream he crashes
With the silence that shows
Ratings of her heart
Only his heart knows
Love in Louisiana
From Mumbai blows
She loves me
She loves me not
As it glows
Oh Lizzie
Stupendously
My feathered *Cock crows
Good Morning in the forum
Fluid seminal as a thought
Of a doomed love flows

In Defence of Aldo Crash 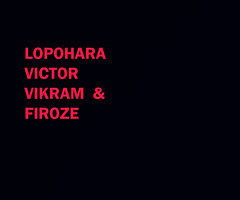