Shooting Hijras Is Not Just Photography But Poetry of Life of My Cosmic Fate, a photo by firoze shakir photographerno1 on Flickr.

People who dont know me , wonder why I shoot hijras , and I shoot hijras simply because I shoot life as a poem , a blank verse an ode an elegy call it what you may..but I shoot hijras I shoot them as I see them , I shoot them in their natural habitat, what hurts me most is the cheap comments on my hijra pictures the vulgarity the ridicule so I choked my comment box at Flickr and at my Wordpress site Hijras of India.

I am not a hijra activist, I have no confusion about my sexuality and shooting people ha nothing to do with their sexual orientation , I shoot the hijras I give them respect and barring a few most of them respect me too..

I have been shooting hijras for about 10 years now , the two places I meet them annually is Haji Malang and Ajmer , and the few I meet on the streets begging for a living , or those in the local trains.. the beggar hijras know me .. as the crazy guy who shoots them ..

Earlier the hijras thought pictures and sold it but gradually they realized I dont need to sell pictures to make money I am a self made small time entrepreneur , as you like to smoke drink I love shooting hijras that is my high , but not my addiction I can do without shooting hijras..

I have a hijra Guru Laxmi Narayan Tripathi now in the Big Boss house spreading awareness even Mr Shakti Kapoor is a very dear friend my patron too..

I have in all humility shot Laxmi with a endearing poetic passion , it was Laxmi who has been my mentor guide , she has visited my house met my family she is very fond of my daughter and my wife.,.
She has yet not seen my grand children..hijras dont come to my house I dont know why.. never..

Most of the hijras at the red light area Mumbai called Cages Peela house know me I have shot them , but have not gone their since a very long time sheer laziness ..

I am invited to Hijra conference in Delhi as I am very close to Gopal Haji and Babita and their eunuch children but I am stuck in Mumbai for good..

Hijras on the road bless me and some hijras who consider me a holy man I bless them too.. I am not a holy man I have my flaws quirks but I am honest sincere in my respect towards the hijras .. the beggar hijras invite me to their shanties I politely rtefuse I dont have time , my life has not been smooth and on a down slide..

However ever since I became a Dam Madar Malang along with my Belgian friend Marc De Clercq , prolific photographer who shoots hijras malangs and the streets , my spiritual status has changed , the hijras and other Sufi monks treat me differently but they know also I am a hardcore Shia Muslim.. believer of Ahle Bayt.. follower of Ali and Hussain.


My soon to turn 4 grand daughter is aware of the hijras and has shot them too, she knows they are different ..

So this blog post is in reply to a dear friend great photographer Joshi Daniels .. his query to me on Google+triggered this response ..

I have over 17000 or more images on the hijras , the hijra shaman , hijra exorcists and eunuch children, I write hijra poetry..


Shooting hijras is my cosmic fate , I cannot escape it .. they meet me I meet them but there are times I can think of them and I meet them right away this is a strange gift that does not surprise me at all.. it does not happen every time but it does happen and so my pictures are my testimony of my tryst with the hijras..

Blogger says that this blog has been rate-limited. Please try again later. 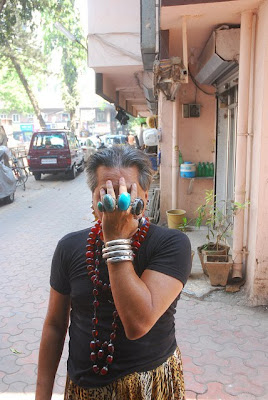 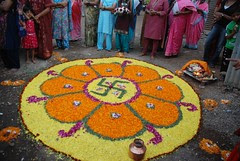 Rangoli is one of the most popular art forms in India. It is a form of sandpainting decoration that uses finely ground white powder and colours, and is used commonly outside homes in India.

Rangoli can be wall art as well as floor art. The term rangoli is derived from words rang (colour) and aavalli ('coloured creepers' or 'row of colours').

The origin of rangoli painting is traced to a legend recorded in the Chitralakshana, the earliest Indian treatise on painting. When the son of a Kings high priest died, Brahma, Lord of the universe, asked the king to paint the likeness of the boy so that Brahma could breathe life into him again. This is how, it is believed, the first painting was made. Also, the son of the king painted a portrait of a girl whom the son liked very much, although the king would not let his son see her. Rangoli also became a form of self-portraiture for women.

Another popular story is that God, in one of his creative episodes, extracted the juice from one of the mango trees as paint, and drew the figure of a woman so beautiful that it put the heavenly maidens to shame.

Chola rulers made extensive use of floor paintings. They are known by different names in different parts of the country; Alpana in Bengal, Aripana in Bihar, Madana in Rajasthan, Rangoli in Gujarat, Karnataka and Maharashtra, Chowkpurana in Uttar Pradesh and Kolam in Kerala and Tamilnadu, Muggu in Andhrapradesh. Some of these, especially many of the North Indian ones like Aalpana more often refer to floor painting with traditional wet color, rather than the powder rangoli more conventional in south India.
Rangoli in front of house during Pongal

Like Hindu and Buddhist Mandalas, the reason for using powder or sand as a medium for creating Rangoli (and its resulting fragility) is sometimes thought to be a metaphor for the impermanence of life and maya.

The motifs in traditional Rangoli are usually taken from Nature - peacocks, swans, mango, flowers, creepers, etc. The colours traditionally were derived from natural dyes - from barks of trees, leaves, indigo, etc. However, today, synthetic dyes are used in a range of bright colours. The materials used for Rangoli take on either a flat appearance, when a uniform monolayer of powders are sprinkled or a 3-D effect when different sized grains like cereals, pulses etc are used either in their natural colouring or tinted with natural dyes are used. Some artists use the 3-D effect for borders alone while others create beautiful designs using grains and beads entirely. Coloured powder can be directly used for fancy decorations, but for detailed work, generally the material is a coarse grained powder base into which colors are mixed. The base is chosen to be coarse so that it can be gripped well and sprinkled with good control. The base can be sand, marble dust, saw dust, brick dust or other materials. The colors generally are very fine pigment podwers like gulal/aabir available for Holi or colors (mentioned above) specially sold for rangoli in South India. Various day to day colored powders like indigo used for cloth staining, spices like turmeric, chili, rawa, rice flour, flour of wheat etc are also variously used. Powder colors can be simply mixed into the base. If the base is light like saw dust, it can be used to make floating rangoli on the surface of stagnant water. Sometimes saw-dust or sand is soaked into waterbased color and dried to give various tints. However that probably cannot be used on water. If a rangoli is to be made on water, the color should preferably be insoluble in water. [1]

The designs are symbolic and common to the entire country, and can include geometrical patterns, with lines, dots, squares, circles, triangles; the swastika, lotus, trident, fish, conch shell, footprints (supposed to be of goddess Lakshmi), creepers, leaves, trees, flowers, animals and anthropomorphic figures. These motifs often are modified to fit in with the local images and rhythms. One important point is that the entire pattern must be an unbroken line, with no gaps to be left anywhere for evil spirits to enter.

Originally Rangoli was done in small patterns — 2 feet square — but now entire floor areas of rooms and hotel foyers are covered in intricate detailed designs. Traditionally, such floor decorations were done only on auspicious occasions or festivals. But today, any occasion is good enough — weddings, birthday parties, opening ceremonies, etc. In the deep South and South West of India and Kerala, flowers are used to create floor art.

Rangoli can be improvised into diverse visual art forms. For instance, it can be used to make elaborate images that look as if they were painted (some examples of such Rangolis: [2],[3],[4],[5],[6]. Sprinkling powder by hand is a very laborious and difficult process, however, and it's difficult to render fine details - meaning the image must be quite large.

In Indian cultures, all guests and visitors occupy a very special place, and a rangoli is an expression of this warm hospitality. In particular, the Diwali festival is widely celebrated with rangoli, since at this time, people visit each other's homes to exchange greetings and sweets.

Rangoli also has a religious significance, enhancing the beauty of the surroundings and spreading joy and happiness all around.

Mumbai's March of a Million - Pro Bahrain Protest , , a set on Flickr.

Laxmi Narayan Tripathi at Home, a photo by firoze shakir photographerno1 on Flickr.
This is Laxmi Narayan Tripathi at her home at Thane .
She was getting decked up for a lunch invite with Sallu Bhai - Salman Khan and Katrina Kaif at Filmistan studio..
Salman Khan has always been sensitive to the defranchised , the underprivileged and the down trodden.
Salman Khan was highly impressed with the wit and charm of Laxmi Narayan Tripathi..her immense contribution to the hijda cause globally.
I had come to Laxmis house , this was my second trip after two years.
Picture was shot by Atharva , Laxmis Man Friday.
Laxmi has adopted two grown up boys as her kids.
She is my metrosexual Hijra Guru.
She also showed me her picture with Salman Rushdie who had visited her at her house recently..
She said it was a private moment and she refused to give me the picture to post at my site. 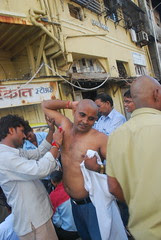 Shaving the Indian Armpit, a photo by firoze shakir photographerno1 on Flickr. 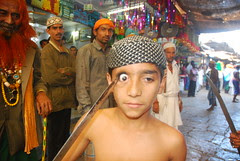