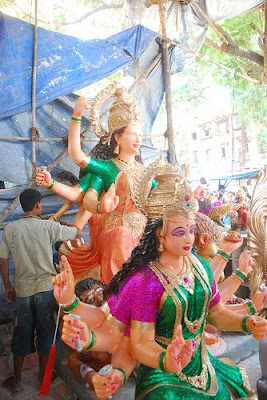 All these pictures of Lalbagh Durga workshop were shot at my friend sculptor Mr Rawles workshop and unfortunately this year I did not shoot the Ganesha workshops both at Lalbagh and at Bandra .. so at both these places they were more curious to know why I had not come to shoot their work..a ritual I have religiously captured every year in the past.

But than being a Dam Madar Malang a mystic poet I feel I have to be beckoned , and even a bird cannot fly without the call from the Lord ..over the Holy Saints Shrine is a saying among Sufis..

This year I wanted to take my grand daughter to shoot the Bandra workshop but the rickshah strike played spoilsport ..or Marziya Shakir 3 and a half year old street photographer would have shot the Goddess too...

Perhaps it is a miraculous nature of divinity that Marziya Shakir has been blessed by what she shot ..all religion and the beggars of Bandra ..

I have eased myself out of Facebook only to redeem my soul that was choked in an abyss and was falling into the depths of cyber hell..I am now posting some of my links at Google+

I miss my Facebook friends but I needed a break and this enforced separation will serve as catharsis for them and for me too..

And it is sad that the developers made such a hue and cry about Google+ but the most decadent most un updated is Blogspot its an insult as a blogger to blog at Blogspot , with lethal unfriendly tools like Word Verification and at least Marc Zuckerburg has gone for innovations on the Facebook interface Blogspot needs a Biz Stone salvage them once again .. even Mr Vic Gundotra cannot save Blogspot .. Amen RIP ..
By Firoze Shakir Photographer No1 - September 25, 2011