Once Upon a Time in Bandra 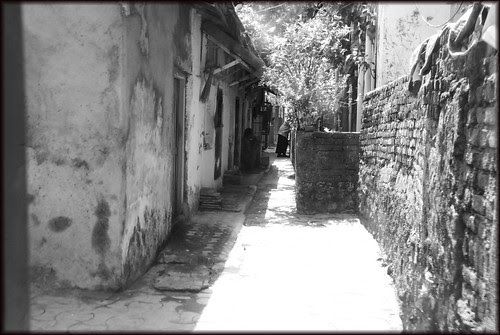 Once Upon a Time in Bandra, originally uploaded by firoze shakir photographerno1.

Nowadays I pass this little back lane of Bazar Road instead of the Indraji Nagar slums, and mind you I have lived half my life in Bandra but never knew about this East Indian locality hidden away from builders and land sharks known as Mathilda wadi.

It all belonged to an East India lady , her house is now a building and around her these single tenements like bungalows .

One day all this will disappear , this is prime land and a profitable one too for the investor.

Every brick in the wall has a story to tell, child hood spent here the gully cricket , the fun the frolic ..turned into wastelands that God forgot.

Motherhood Under The Bodhi Tree 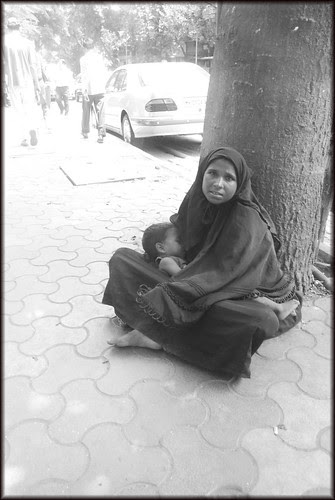 She sits just across the Bandra Police station and her face tells her story of pain.

Later in the evening there is another young Muslim beggar mother of two who sits outside the Tata Fire Temple.

I have stopped cutting thorough the slums so I dont see the few that sat at Bandra Bazar Road.

They wear the complete hijab so I hardly know who they are , but they are all part of my street documentation of pain.

And their pain is the only essence of their lives that generously flourishes , there is no escape , they are bound and gagged to their impoverished fate for life.

We as Muslims hardly have time for all this , its part of a wild landscape of life, what matters is upholding our spirituality, at any cost, block this page block that page but we are unable to block pain from a Muslim beggar woman's life.

Luckily we are in India so they are not that badly mauled and mangled by regressive fatwas that is the only offering without any positive hope of rehabilitating their lives.

So I shall continue to shoot pain covered in a veil , justifiably so that your left hand does not know that your right hand begs.

Muslim society watches all this with eyes open shut.

And wonder why I bring this on their face on the internet.

And now you know why I dont make prints and hand it to the people I shoot , pain as a print hurts more than it would as stark reality of the street.

Honestly why should Media or the hotshot photographer shoot all this , makes no sense. 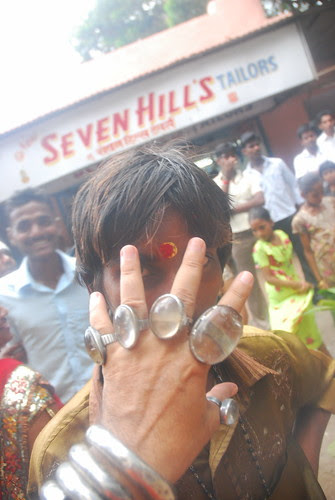 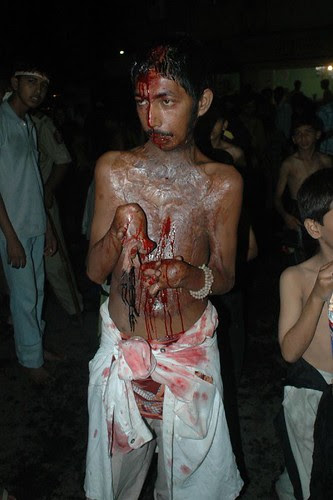 I have posted text on this picture today at Facebook.

I posted the original picture at Flickr and than cross blogged it here at Facebook , my pictures are street documentary of the people I shoot .

Normally I try to to keep text minimal on my pictures, I am adding text here now.

A Muslim cross dresser posted a comment here on this picture at Facebook..I removed her from my friends list

Her comment was that the Rasul has not said to do all this and dont show such things.

Now for me to add my response will not help or change her mindset ..I have no agenda of promoting Shiasm, but I do look forward to amity between all sects who believe in Allah His Holy Prophet and Ahle Bayt..

The person in the picture is a Sunni beggar who one would see at Makhdoom Shah Babas Shrine at Mahim.

I saw him, got to know him and he is a kindly person , than I began seeing him outside Kaiser Bagh scourging his burnt body with blades.

People gave him alms generously , and I never question a persons faith , I am a street photographer , I shoot and share a cosmic reality of pain.

I have till date never seen this Sunni beggar since the time I last saw him perhaps 5 years back or more.

Some say he died a tragic death ..but nobody knows the truth and I wish him a long life wherever he is.

Now to the Muslim cross dressers remarks on my picture that I give a public response , she finds fault with what I have shot and according to her goes against the Holy Prophets beliefs.

Had I written Lover of Hussain perhaps it would have not provoked her I wrote Sunni and I shot a Sunni doing a ritual that is predominantly done by Shias during Moharam..

Although I have shot Sunni boys cutting up themselves during Ashura in Hyderabad Bibi Ka Alam procession .

What made me remove her from my friends list at Facebook is her short sightedness , she gets upset seeing a guy cut himself up for Hussain and she or her kind dont get upset when Muslims kill Muslims lustfully in the name of Allah and Jihad .

And they maintain a eunuch silence like the rest of the Muslim world it is this blasphemous silence that promoted this war on Humanity.. it is this silence that has destroyed the ethos of Brotherhood and Peace loving Islam.

Here I am happy to be an Indian born Muslim I have no issue with any Muslim sect save the one that promotes sectarian strife under the guise of petro powered apostasy of Hate for all religions save their own kind of Islam..Islam that they have hijacked in the name of Allah Ho Akbar as a war cry instead of a call for prayers

I did not shoot my picture to flatter your bigotry in the first place I shoot what I am destined to shoot it is part of my karma.

I shoot Hinduism Sufism Christianitry you hardly find fault only my Shias pictures of blood letting get on your goat .It hurts me humanly, I follow Facebook Flickr Twitter terms and guidelines and you are not a moderator or web master see my pictures as pictures only and move along.

And knowing the kind of pictures I shoot and public on Facebook you should not add me at all.

Yes I will Remove and Block friends if they attack my integrity as a human being.

I cannot become a Wahabbi or adhere to your beliefs , I am a born Shia I shall die one too .

Stop proselytizing your hate for me through adverse comments.

A simple request and a disclaimer too.