RIP LAW AND ORDER UNDER THE PRESENT REGIME 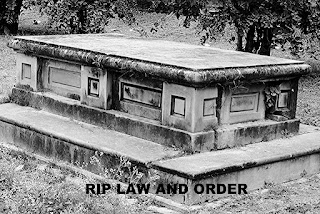 The Malwani police station could not prevent the inevitable hooch tragedy where 100 poor people died drinking poisonous liquor and the CM said the guilty will hang.. who is guilty the guys who supplied and sold the booze or those who allegedly turned a blind eye to this racket in their backyard ,, and why do the cops not raid 5 star hotels instead of soft targets like lodges or ban the lodges ,, this police brutality to the young folks in the lodges and this was trespassing on their privacy .. this was not public indecency,, why does not our dynamic CP Rakesh Maria give a statement I am shocked and appalled at the Police Raj. they allow criminals to snatch chains , they allow criminals to murder loot and than nab innocent people having a good time with their money,.Mumbai was never like this did they nab drugs contraband weapons beats me did they nab any Tiger Menon from the lodge ,, RIP LAW AND ORDER UNDER THE PRESENT REGIME
http://www.mid-day.com/…/mumbai-couples-picked-up-…/16437186
Mumbai: Couples picked up from hotel rooms, charged with 'public indecency'
By Shiva Devnath |Posted 08-Aug-2015
By Firoze Shakir Photographer No1 - August 08, 2015

Before Going To School Marziya Performs The Namaz 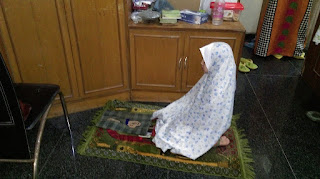 My wife has molded the spiritual side of Marziya Shakir my 7 year old granddaughter , she began reciting her namaz when she was 5 .. now she is teaching Nerjis her sister the same ,, Nerjis is 4 year old..And though after school Marziya goes for her Arabic and Koran classes at the Bandra Shia Mosque ,.. where all this is strictly taught by ladies unlike the Sunni madrsas where men teach 10 year old girl..there are somethings only a woman can teach a girl..but parents grandparents must take up the initiative the girl child can learn all this at home and luckily Marziyas best friend Zehra is as spiritual as her , they are totally seeped into all this ,, and for Shia kids the greatest lessons in spirituality piety dedicated is during Moharam and Ramzan.

Nerjis follows what her sister does , they know the main scriptures , the famous matams  thanks to their mom dad and my wife ,,my wife leaves no stone unturned grooming Marziya since she was a tiny kid taught both of them to make parathas , domestic chores and Adab Tehzeeb...it is i their blood as their mother is a Lucknow born from a old traditional Shia family .

Besides this spiritual side both are creatively inclined , painting drawing recitation both are on their Ipads coloring and listening to poems ..they hardly touch my camera now ,, but both can shoot almost the way I shoot ,,

I forced the camera when they were growing not anymore ,,,camera was just a moment to show them a world beyond their world ..both are strong its been a few days since their mother left for Lucknow to take care of her mother who is ill leaving the children behind with my wife and Zinnias mother .. and though they miss their mother terribly they understand ,,

I pamper them a lot I never come empty handed I always bring them their favorite cold drinks and biscuits and cookies .

I am always stumped for words by Nerjis she is witty , intelligent and with very sharp memory.. the prettiest and the toughest is Zinnia,,all 3 fight and become friends in no time ,,

The Selfie Moment,,Does Not Include The Hungry Beggar Girl Outside

at the stomach restaurant
friends having a ball selfies
they will post on their facebook
wall.happiness joy on their faces
all sometimes you can be drunk
without indulging in a sip of alcohol..
.they have ordered chicken fried
rice chicken manchurian lollipops
shared by them all but for the little
beggar girl sitting outside a broken
doll nothing at all diminutive small
life of the rich affluent for the poor
total fuck all.. on the face of the girl
beggarly woes and deathly pall..

she will run away hurriedly when
the rain falls ..taking shelter outside
the doors of a linking road mall 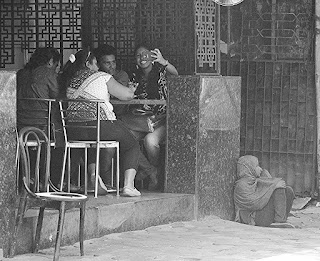 It takes madness to find out madness. Lady Gregory 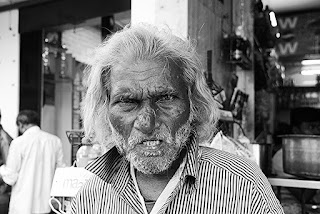 
Over the years I have been shooting madpeople mostly those that came in with the winds , they stayed a while and I shot them..I took my chances shooting madpeople , madwomen with rocks in their hands ,madpeople who hated the camera more than me , and I shot their inner angry lonely wild angst..and later I decided to house them in a set at Flickr .. Madpeople of India .. madness has been in my family on my mothers side ,,but not a raving or loony madness but an individual one ,,creative crankiness and more .

During my travels I met mad monks , mad bawas , crazy fakirs , morbid malangs ..one minute a madperson was nice to me I offered him tea next moment without any emotion he took the glass of tea and threw it away abusing me cursing me calling ma mad man.. I realized there was something cosmic in both our madness , my madness of shooting mad people ,,I have had weird moments experience with madpeople , and the one madman I really miss lived on the roads at Bandra Bazar , he would never bathe, and than someone would give him a new pair of clothes which within a week became black as soot , he used to watch me , never spoke to me I was shit scared of him but I shot him , and one day like the other madpeople he disappeared too.

I shot abandoned mad kids a long time back, and most of these mad souls were left out given away for good ,,,There is a mad man I shot at Bhendi Bazar , and now they revere him as living Holy Saint and he is in terrible state , I shot him at the 100 Urus of Abdul Rehman Shah Baba Dongri.

I meet this guy lying on the street at Nehru Nagar Kurla East and this was the first time I walked up to him put some money in his hands and shot his picture , and while I looked into his eyes I think he was dead sure I was the mad one but than I did not have the balls or guts to give him my camera and ask him to shoot the spark of his madness in me.

I know guys like me wont ever be allowed in a madhouse , so I shot madpeople on the run.. running away in oxymoron haste away from their own fucked self..

Most of the madpeople I met at Dargahs like Meera Datar , and a lot at Hussain Tekri too.. perhaps this was more of a spiritual cosmic madness .. much different from Hazri.. where the spirit enters the human body and causes havoc.. I shot this extensively without adding it to my madpeople set at Flickr.

Only once at Hyderabad a madman had grabbed my throat from the back and would have strangled me had my friends from the Imambada not come to my aid.. yes I am scared of madpeople despite my moral bravado..

Madness doesn't happen to someone alone. Very few people have experiences that are theirs alone.
Mark Haddon
By Firoze Shakir Photographer No1 - August 08, 2015