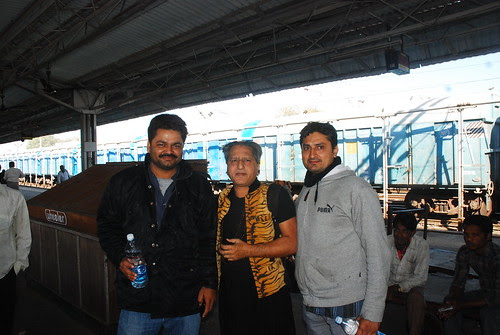 Hyder Bhai Ali Reza Shirazi and Me At Godhra Station On Our Way to Jaorah, originally uploaded by firoze shakir photographerno1. 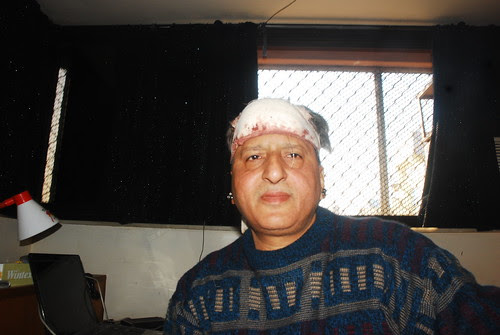 I entered my house this morning I had arrived from Hussain Tekri Jaorah, this was a trip I could have not made without Ali Reza Shirazi from Mount Mary Bandra and Hyder Bhai from Mira Road, they were wings that poetically flew me to Hussain Tekri, more about the trip I shall post on another blog.

I shot the HussainTekri Chehlum after almost 7 years,and this time I shot it with a passion I could not understand , when I shot Hussain Tekri earlier on my first trip, I was not a blogger and I was fresh into photography.


I shot the hardcore zanjir kama matam at the roza of Hazrat Abbas and Bibi Sakina and seeing the intense pain of the Kashmiri Shias I snatched a dagger from a guy and cut open my head doing the Dance of Death , Tandav on the soul of Shimr..

I shot the Kashmiri Shia extensively their grief their Girja , their unique style of noha recital, I captured all , as I hope Bibi Fatima our Princess makes it possible to shoot Moharam in Srinagar next year..this is my Mannat at the her roza at Hussain Tekri Jaorah.. sealed with my kamazani.

My bleeding because of my diabetic condition was bad and on trips such as this I stop all medicine , my regular diabetic dosage till I come back home to Mumbai.

And once again the JUST Boys of Dongri holistic healers did the needful, they told me to take stitches on my head but I refused , and my head is still bleeding in droplets.

I left Hussain Tekri along with the greatest Shia matamdar Ali Shah of Vasi Lodge, I did not have tickets , but decided I would take it at Ratlam, so we first took a tonga, than a jeep till Ratlam, and Ali Shah bhai realized he had misread the time departure to Mumbai by Japur Mail was actually 9.05 which he thought 9.50 ..

When we reached Ratlam station the train was delayed and arrived just in time to catch it.

I took a local from Bombay central and arrived home , Marziya said Dada you have done the kama again and shot this picture with my Nikon D 80.

So this is the Introduction to my new set at Flickr..Chehlum in Hussain Tekri Jaorah 2011..all the Shia and the non Shia stuff I will be posting in this set.

And I shall shoot the Mumbai Chehlum today , but wont participate in the Kamazani here as my wound is raw...