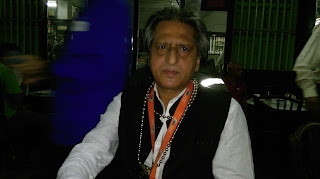 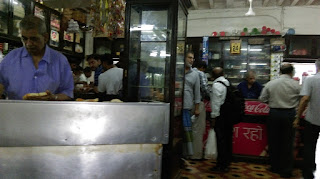 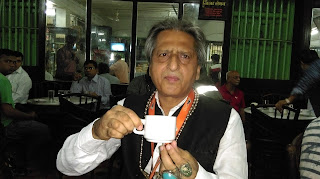 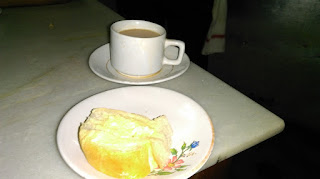 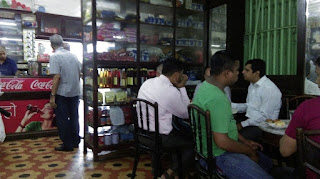 u
This iconic Irani tea drinking hole and eatery of snacks that includes its famous omlette , pudding , mava cake ,no bun maska ,bread slice with butter or jam.. is a hit with the public , situated bang opposite the Grant Road Station East Side.

This Irani joint opens at 5.30 am and is fully crowded between 7 and 9 am the breakfast crowd of local residents , officegoers , school and college kids a cup of tea and a pav bread cut into slices with dollops of butter costs ,,Rs 20..

I come here for some official work on the other side of Grant Road Orbit Heights across the Nana Chowk Skywalk.. as my appointment was at 9 am and I had reached Grant Road at 8 am I sat had my Irani chai maska slice shot some pictures , the boss manager like me and are gracious . they dont object to my shooting here .

Ever since I was a kid living at Wodehouse Road Colaba we had small Irani joint with Malbari waiters and manager next to Mr Frank Simoes ad office it belonged to Mohomed Reza who owns Sarvi at Nagpada .

The keema brun was really good , than we shifted to Neelam Breach Candy and here too there was an old Irani joint but we liked the ice creams here .

Finally when we relocated to Mohini Mansions Stand Cinema we had the Irani joint  Strand Coffee House next to our building at Strand House ..it was also owned by Mohomed Reza ..of Sarvi fame .

When we shifted on rent at Pitruchayya a wall away from Mehboob studios for a year it was Mohomed Bhais Good Luck Irani restaurant ,,

We returned to Bandra Bazar Road and here it was Pahelvi..another famous joint for keema brun and khichda on Fridays.

So Irani tea and Irani people are cosmically connected to me , my wifes paternal family have Iranian origins ,,Qazilbash.

So the original Chai pe Charche and no Kharcha was the eponymous Irani cutting that got bushwhacked by the more conniving one anna smart Chilya pani kam chai that was the end of Irani Chai in the 70s and 80s ,,