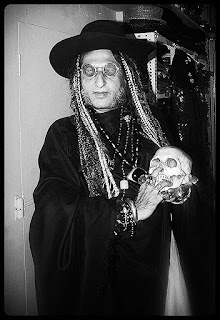 My parents gave us everything that was possible within their means and our childhood responsibility our growth was nurtured by our Hindu maid and though she had a name my mother insisted that she would be called Aiee another name for Mother and so this Marathi lady was part of our house she had one son Tulsi they stayed in a servants quarters at the Military blocks on Wodehouse Road ...but Aiee stayed at our place and as one Shakir gave way to another Shakir she took care of them ..the last Shakir she loved the most after me was my younger brother Zahir Babu she literally bought him up ..
Than we moved from Wodehouse Road Aiee too left and both Aiee and her son Tulsi died .
But her memory stays strong with me and one of the reasons for my love for the Hindu community and my fascination for the Hindu feast days tradition rituals that I could now watch closely as a people photographer.
Even after losing my house at Khar Danpada during the 93 riots and living on rent all over the suburbs thanks to a good boss and friends I have never developed hate .
I thought we were victims of living in the wrong era under a wrong government .
Over 65000 Hindu blogs my love for shooting Hinduism as Hope and Hindutva has never subsided .
I was recently asked by a person if I wanted to Re awaken the Hindu in me through Tantra and I told the esteemed person that what my mother gave me in her womb was a glass of milk I am happy adding sugar from all of you .
When I went to shoot the Kumbh or the recent Khamakhya I left my Muslim identity my religion at home I shot the events that had an influence on the poetry of my mortal soul as a Hindu .
And I am my Hindu friends eyes I shoot for them and they know it too ..
So I now come to another part I have kept my Facebook timeline absolutely pristine ..
My thoughts my clarity all are gifts of the humility of my parents that was born of the Humanity of Hussain.
Whatever path I follow I am a Shia born I have journeyed into various religions faiths but my beliefs bequeathed by my parents remain intact .
I did not have to follow any preacher never ..even as a Shia I stayed away from every aspect of congregational spirituality .
I became a Malang by accident and it has more to do with my photography than lack of faith .
No I can't become a Naga Sadhu though I love shooting them the most ..and I am now doubly curios I want to shoot the Aghori way of life .
I don't have the financial resources but I will keep on shooting this incredible part of Spiritual India .
I did not have to argue or defend a Naik who I consider the biggest Khalnayak on the Soul of Islam..I have seen a few of his videos where his bouncers bully the Hindus and the Christians and this is not the way at all in the study of comparative Islam or comparative Religion.
One thing is sure Salafi Islam had no place for kafirs like me it hates all Muslim sects it hates Shiasm Sufism some Sunni schools of thought and if our Mullahs had learnt English promoted Islam to the convent going kids this would have not happened but our Mullahs were busy chewing pan ..and they have now finally woken up to make another misplaced Martyr out of Naik.
I have seen people defending him on Facebook and Twitter and I believe it's the law that will take due action ...
I don't to waste my life talking about him ..so I remove tags of his posts I don't want to highlight him on my timeline period .
I don't want to jar my photo steam with your hate and your personal bias ..as a Indian first than as a Shia we are not part of his bandwagon ...
I am not posting my Khamakhya pictures here at Facebook it is a very long series and I have just completed a 32 GB memory card I have another 8 more and the uploading at Flickr is very slow .
I am still leashed like a dog to my bed my 10 day as such.
But I am enjoying the company of my grandkids for sure .
These thoughts the fluidity of my thoughts comes easily to me on Facebook than any other social platform ..
But I need a picture to complete and end my post. So here I go to search for one ..
By Firoze Shakir Photographer No1 - July 09, 2016

Shooting The Eid Ul Fitr Namaz 2016 .. From The Bandra Skywalk 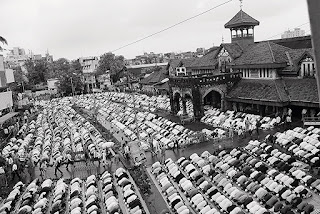 I have been shooting the Eid Namaz ,, both Ramzan and Bakra Eid or Eid Ul Zuha every year at the Bandra Station,,,it is an extension of the proceedings at the Bandra Station Mosque and is organized by them as the Mosque gets fully packed on this auspicious occasion ,.
I have been shooting the Eid namaz much before the Bandra Skywalk made its appearance and from the skywalk you get a great view ...otherwise we stood up on the railings of the bus stop to get the top shots ,
Those early days a lot of great photographers dropped by to shoot the station namaz ,, my favorite was late Mr Anil Bhartiya photo journalist...I miss him nowadays ,,
Much of the motley crowd of photographers are photo journalists from various dailies and I had a great rapport with a few of them like Pradip Dhivar , Nitin Sonawane .Saatish Malavde and others ,.
And we met twice a year covering both the Eids .
This year none of the above were shooting the Eid Namaz at Bandra Station skywalk,
This year Eid Ul Fitr namaz was made tough by the Mumbai cops of Bandra and Khar they were very strict and did not want photographers crowding the skywalk for security reasons ,,
This was perhaps the first time in years that the senior most Dr Dorje Cherring IPS took two rounds of the skywalk with a huge contingent of cops ,, he knew us all smiled but the rules could not be changed and accredited photo journalists from powerful dailies too had to shoot without complaining .
I had taken a corner as I was the first one to arrive on the skywalk . despite my serious leg injury that I had in Khamkhya Assam recent shoot .
I shoot the namaz barefeet as a tradition of respect for the namazis praying directly under the skywalk from where I shoot .
And almost all the Miya s from Bandra know me as I am the only Miya shooting the Eid Namaz regularly ,,,other Miyas maybe shooting it but not as colorfully dressed like me ,,
I shot the namaz story board this year I left early and spare the photo journalists their manipulated forcing kids to hug called Eid Hugging pictures instead I moved out shoot the Eid in th Shastri Nagar slums and a huge horde of Muslim beggars ,
And those non Muslim tribal beggars that clumsily wear hijabs to pass of as Muslims and I know most of them as I was shooting them when they were toddlers carried on a sling to the waist of other child beggars ,, and they know I know ,, who they are .. they give me a grin.. lol
This year I walked a lot .. limping my way barefeet in dirty slushy waters of the Bandra slums and back home ,,,
I did shoot Garbage outside both the Shiv Sena and NCP offices close to the Shastri Nagar Municipality parking lot of dumpers .
Frankly the Bandra Municipality does not much care for Muslim slums , I know slumdwellers who pay out of their pockets to get the garbage removed .
Modijis Swach Bharat is a total failure in all the Muslim slums and the eponymous Bandra Bazar Road the battleground for reclaiming the Municipal Corporation seat from Congress Mr Tanvir Patel.
So just a few months before the elections all the big guns of the BJP will arrive and blow the bugle of Acche Din v/s the Existing Dustbin.
And Advocate Ashish Shelar the blue eyed poster boy of BJP Bandra will try to steer this ward to victory to make a hat trick..at all 3 levels of Governance of our city .
Ms Poonam Mahajan our erstwhile MP rules here by remote control.. that has been generously placed in Advocate Ashish jis hands ,, we have not seen Madam in our area for a very very long time maybe at flag hoisting only at the Bandra Reclamation promenade ,,
By Firoze Shakir Photographer No1 - July 09, 2016