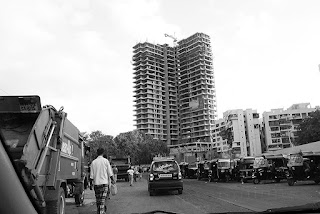 From almost every place
in Bandra this monstrous
tower I have shot a very
intriguing story on a poor
mans plot ,,,built by an
emperor this concrete
Taj Mahal..on the soul
of the slumdwellers is
a blot..blow cold blow
hot..builder politician
nexus a moment time
forgot ...from its pigeon
hole windows the
migrants shitting at
the shoreline of bandra
reclamation promenade
a moment could be
caught ,,,says a voice
of the rich mans
conscience shut the
fuck up so what 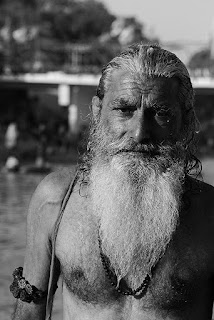 He was walking naked on the banks of the River Shipra I stopped him shot a few frames that I restricted from public view because of Flickr guidelines against frontal nudity ,, and I took this one shot to tell my story ,,

I did not talk to him at the Kumbh everything people moment move rapidly and because I too was dressed as a Sadhu he had no issue with my shooting him.

My entire wardrobe for shooting the Kumbh was saffron.. during the Shahi Snan and if you are with the Naga Sadhus in the procession the Naga Kotwals police pull you out if you are dressed in white ...

And this was my fourth Kumbh ...I was with my Naga Guru but aware of the Dos and Donts ,, though I was walking with my naked Guru as we headed to the River Shipra,

Faces Of India At The Ujjain Kumbh 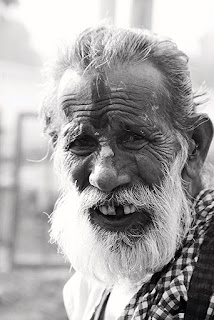 Every face on the road leading to Bhuki Mata Mandir or the Temple Of Maha Kal has something to say ,,etched on the skin of the Sadhus face is the history of his race ,,,every minute detail every trace ..within and on the surface ,,,God is here God is there God is every place ,,,he waits on the Banks of the Shipra , a dip in the waters God he will embrace ,,,blessed by the saffron rays of the Sun...love and grace .

I spent hours on end shooting people ,,, I stopped some I cajoled pleaded but I shot faces ,,, I was re discovering photography once again I just wanted to penetrate the sanctity of the Sadhus eye ..his comic quest his cosmic destination... all at one time .

My Guru was perplexed when he walked with me and I shot the naked Naga Baba he chided me did you not shoot him yesterday ,,,why are you shooting him again.. I smiled I replied my camera cant resist shooting the Naga Sadhus .

And now as I write this my Guru must be resting after the  9 May Second Shahi Snan on the Shipra ,,I could not make it ,, my body is in Mumbai my disembodied spirit is in Ujjain.

Photography has not been merely shooting pictures it is a documentation of a way of life of the Naga Sadhus ,,

But at the same time I also need money to be at the Kumbh ,, I could not live empty handed on the hospitality of my Guru..

I fed the poor I tried to do as much as I could ,, and I cleansed myself in more way than one ,,,


There was a lot of things I wanted to do at the Kumbh but it was not possible in a few days ,,,


Getting a train ticket to Ujjain and back to Mumbai was very difficult ...

And I am not sure whether I will make it for the third final Shahi Snan on 21 May 2016. 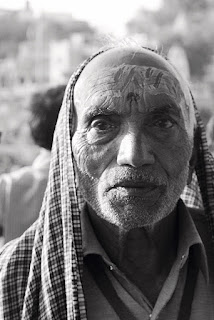 I had decided this time at the Kumbh Mela Ujjain mostly to shoot the diverse faces of India ,,, and Hindu spirituality as it reflected from the faces of the people  I shot ,, I shot without method I shot impulsively ,,,and this was my first Ujjain Kumbh..

I was not into Akhara hopping ,, I lived with the Naga Sadhus in a tent that belonged to the disciple of Maha Mandleshwar Mahant Kalyan Giri ,,,Satyapalji who is the Guru of my Gurus Guru,

My Gurus tent was ready but Satyapal ji wanted us to stay with him..and my Guru Shri Vijay Giri Maharaj a scholar an ex teacher is a very simple man..you can gauge this from the very fact that I was his only Muslim disciple ,,,

And I have known him since my first Kumbh 2004 Nasikh,, through him I shot the Maha Kumbh,..the last Nasik Kumbh 2015 and Ujjain is my fourth Kumbh.


As my genre is people and street photography I would stand on the road near my Akhara and shoot people as they passed by .. as I was dressed as a Sadhu ,, many obliged ,,,

But shooting the Naga Sadhus needs tact as they can be very aggressive volatile towards the hands that wield the camera ..I had my crazy moments a Naga Sadhu chasing me with a stick.. he was only comfortable with foreigners shooting him.. I obviously could not dole out dollars ,,, and most of the Naga Babas blatantly seek money.. which really did not bother me ..


Even if I do not go for the last Shahi Snan on 21 May.. I shot a lot and of late I prefer shooting videos to stills ,,,I search for hardcore footage and I shot a lot of Ling Kriya with a spear with a sword .. Ling Kriya of Naga Sadhu pulling a car ,, and most of my images are restricted ,, from public view because of frontal nudity at Flickr .

Ling Kriya is Penile Yoga..at the Maha Kumbh Allahabad  I shot
a Naga Sadhu pickinhg up a 25 kg boulder with his penis ,,, lol


Its Time Flickr grew up I mean the nudity of the Naga Sadhus does not hit you in the face nor is it obscene but yes as I follow Flickr rules regulations I have moderated my Naga Sadhu images accordingly ,,