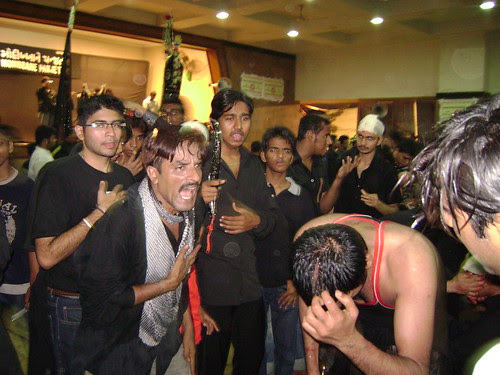 A checkered scarf round his neck , he places the dagger in the boys hand and with cries of Ya Ali Ya Ali along with the crowds urges the boy to cut his head without fear or pain. 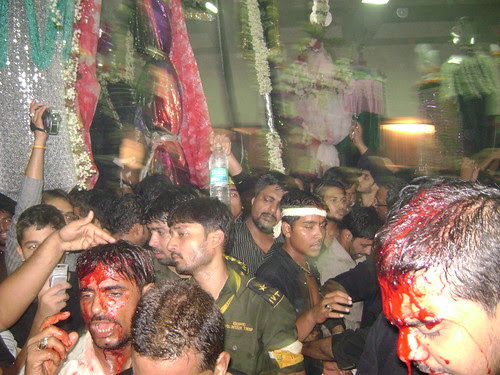 When the short majlis gets over at Kaisar Bagh Dongri, the people that were seated hurriedly get up and form a circle , the space within is now replaced and dominated by the men and boys who will do zanjir matam, sword matam and kama zani.

Around the hall the procession of Alams and Taboots moves on and this is now at close quarters , the alams come from various Anjumans of Imamwada and other areas in the vicinity.

Munna kama my friends voice can be heard along with others shouting Ya Ali Ya Ali as they urge the guys holding the daggers to cut their heads , the first aid guys quickly wash the bleeding wounds and bandage the same efficiently and quickly.

Now beyond the hall in the courtyard outside little kids do the zanjir zani and there is a medical aid stall.. everything is hand for an emergency including a waiting ambulance.

Even the top guys and trustees give in a hand , so you will see Safdar Karmali or Moeb Nasser helping the mourners and the matamdars.

Kaisar Bagh is verily a Shia Khoja Gadh of Faith..

Every Shia khoja kid has run with alams, cut his head here first..and the older folks now aged , with all this wet wet eyes and nostalgia.

And here I am blogging text on pictures not shot by me.. I am giving a voice to the silence of a visual soul..shot by someone with a greater passion for the documentation of his faith..

You dont need to be a great photographer to shoot pain.. you must feel it to make others feel it to..a 1400 year pain , a protest against injustice and oppression and nothing else..Hussain is Humanity...

A Moment of No Return 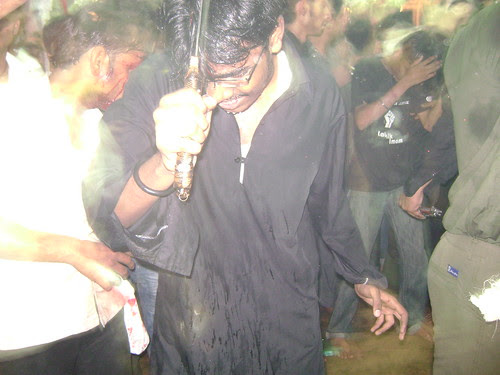 A Moment of No Return, originally uploaded by firoze shakir photographerno1.

You have to be physically present at Kaisar Bagh to capture a child or a teenagers tryst with faith via the dagger , a point of no return.

Kids waiting for their turn , some annoyed as the dagger was pulled away from their hand before they could cut themselves satisfactorily .. frayed tempers , some guys who snarl at you with open fangs for taking their pictures makes me throw up.. humility where art thou at Kaisar Bagh when I need you most.

But Munna and his volunteers know the purpose of my pictures , and they know I do this as a passion and not for an commercial purpose, and I know the one person who must have genuinely missed me this Moharam at Kaisar Bagh is Munna Kama.

I was in Hyderabad shooting Ashura there.. over 3000 pictures shot in three days.

In Mumbai I only shot the eve of 7 Moharam I left for Hyderabad the next morning.

And I on my part missed Moharam in Mumbai, but I wanted a Moharam backdrop change and Hyderabad was a perfect change with the Bargah Bibi ka Alam and Hussaini Koti. 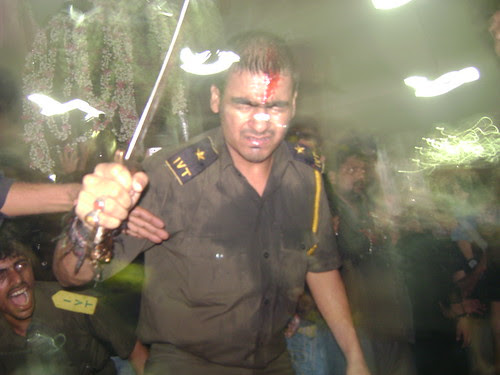 Kaisar Bagh at Dongri, the Khoja Shia citadel of Faith, where this was shot is a moment of spiritual frenzy,and this guy is a volunteer who leads from the front cutting his head with an unimaginable fervor of faith..

He is there on all the few days that this ritual is held from eve of 7 Moharam till 9 Moharam late night.

The next day being Ashura all are involved in the procession from Moghul Masjid to Rehmatabad..

Munna Kama who sent me these pictures is part of a first aid service in a mobile ambulance on Ashura day, and I doubt if any Shia Khoja kid has not had his head cut for the first time under Munna Kama.

He initiates them into this gory ritual of a childs coming of age..and he to cuts his head frantically..I remember shooting a child who took the dagger to cut his head and it would simply not cut, he must have made over a dozen attempts, and the same dagger would cut through the next persons scalp..And I would shoot all this pushed from all sides , and this is a tough one , as the juloos moves around the hall where the kama zani and the zanjir and sword matam takes place.

My French friend Vladimir Mouveau who I bought here a few years back went mentally berserk..So rituals are an integral part of mans religiosity, rituals that one may not like but are a part of a 1400 year old tradition.

My aim as a photo blogger , is to show you all this without glorifying the act, I am a Shia I cannot change my spots for stripes, I dont proselytize , I show you a community's angst its anguish and culture.

I have shot Hindu rituals that will throw you off balance but I as a blogger dont criticize the next mans faith at all, I have shot King Cobras during Nag Panchami at Battis Shirala with my face close to his fangs, and Faith has kept me alive.

But one has to be mature of mind to understand all this , I dont have the financial support or the backing that other photographers have, but I manage , without complain shooting the soul of Humanity barefeet.

All the pictures in this lot were sent to me by Munna Kama to post at my site at Flickr.

And my uploading problem at Flickr is the new pain in my butt, my internet tech checked my connection , they say the problem lies with Flickr.. and to bring this to the notice of Flickr wont help..they will forward my missive to a guy on top who invariably is far too busy to get back to you...

Makar Sakranti and the Kite 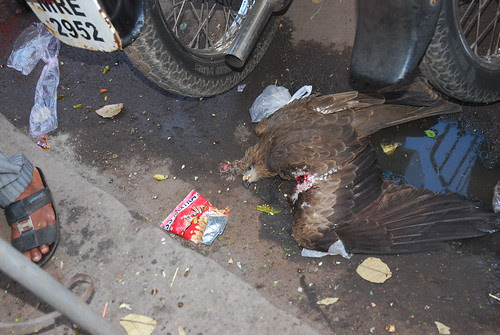