The Raving Mad Man Of Hyderabad 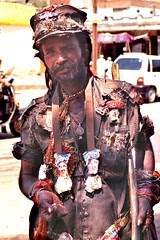 The Raving Mad Man Of Hyderabad
Originally uploaded by flickr photographerno1
He was common feature near the Choti Bargah , deviously intelligent man, his stories were beyond the realm of reality..I shot him 5 years back, and post his picture as my poetry .

his character smudged black and blue
on lifes dried out ink pad ..
in dirty unwashed clothes he was clad
his mother a prostitute several fathers no dad
his woes hung on an easel unpainted and sad
The raving Mad Man of Hyderabad
who told me once that he was born sane
in a world going mad ..this Indian Sindbad
not paying taxes
nor exercising his franchise
no internet connection
no falling in love
no worldly miseries to add
his sleep silence untalked
he lived while others mocked
his moments of madness
unlocked ..
looking at the worlds perversities
around him
he is no more shocked
away from the
reign of terror
in Islamabad
away from
shia sunni skirmishes
sectarian hate in Baghdad
Happy go lucky
walking dead but alive
dirty dressed clean minded nomad
this raving Mad Man of Hyderabad
By firoze shakir - July 13, 2007 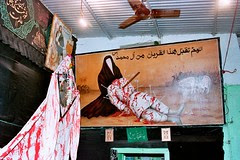 "If Hussain fought to quench his worldly desires, then I do not understand why his sisters, wives and children accompanied him. It stands to reason therefore that he sacrificed purely for Islam."

"The best lesson which we get from the tragedy of Karbala is that Hussain and his companions were the rigid believers of God. They illustrated that numerical superiority does not count when it comes to truth and falsehood.The victory of Hussain despite his minority marvels me!"

"Hussain marched with his little company not to glory, not to power or wealth, but to a supreme sacrifice and every member of that gallant band, male and female, knew that the foes were implacable, were not only ready
to fight but to kill. Denied even water for the children, they remained parched under a burning sun, amid scorching sands yet no one faltered for a moment and bravely faced the greatest odds without flinching."

Brown
Brown in his `A Literary History of Persia' writes:

As a reminder, the blood-stained field of Karbala' where the grandson of the Apostle of God fell at length, tortured by thirst and surrounded by the bodies of his murdered kinsmen, has been at any time since then sufficient to evoke, even in the most lukewarm and heedless, the deepest emotion, the most frantic grief and the exaltation of spirit before which pain, danger, and death shrink to unconsidered trifles. Yearly, on the tenth day of Muharram, the tragedy is rehearsed in Persia, in India, in Turkey, in Egypt, wherever a Shiite community or colony exists; ... As I write it all comes back; the wailing chant, the sobbing multitudes, the white raiment red with blood from self-inflicted wounds, the intoxication of grief and sympathy.

"This is a catastrophe whereof I care not to speak at length, deeming it alike too grievous and too horrible. For verily, it was a catastrophe than that which naught more shameful has happened in Islam...There happened therein such a foul slaughter as to cause man's flesh to creep with horror. And again I have dispersed with my long description because of
it's notoriety, for it is the most lamented of catastrophes."

Sir Muhammad Iqbal says:
Imam Husayn uprooted despotism forever till the Day of Resurrection. He watered the dry garden of freedom with the surging wave of his blood, and indeed he awakened the sleeping Muslim nation. If Imam Husayn had aimed at acquiring a worldly empire, he would not have traveled the way he did (from Medina to Karbala). Husayn weltered in blood and dust for the sake of truth. Verily he, therefore, became the bed-rock (foundation) of the Muslim creed; la ilaha illa Allah (There is no god but Allah).

Empty Vessels Make the Most Noise 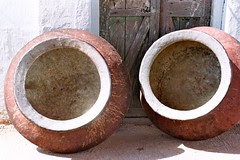 Empty Vessels Make the Most Noise
Originally uploaded by flickr photographerno1
I am fed up here at Flickrs with a few peoples comments , I dont run a religious Madarssa I shoot pictures of a Shia ethos , I write poems on what is worse than just keeping a religion alive , it is killing of man and mankind.
It hurts to see the chaos in the Muslim world , beyond scriptured silence lies misinterpreted way of Life as portrayed by the new militant custodians of Islam.It hurts all of us.Radcalism and extremism that destroys hope harmony in Humanity .
I think its time we resolve issues through dialogue instead at the point of a gun..
I delete all comments that are defecated on my posts , your questions lie with your Mullahs go ask them..
I show through pictures unmanipulated the wounds beyond a bleeding forehead or a bleeding back...
If I sound like a Shia well it part of my birthright..nothing can change that..

Sir Muhammad Iqbal says:
Imam Husayn uprooted despotism forever till the Day of Resurrection. He watered the dry garden of freedom with the surging wave of his blood, and indeed he awakened the sleeping Muslim nation. If Imam Husayn had aimed at acquiring a worldly empire, he would not have traveled the way he did (from Medina to Karbala). Husayn weltered in blood and dust for the sake of truth. Verily he, therefore, became the bed-rock (foundation) of the Muslim creed; la ilaha illa Allah (There is no god but Allah).

my poem on deleted comments at flickrs

Micro mini skimpy
Minded comments
From some
Muslims minds
Residing in
empty headed tents
Asking me to see
Islam as in Malaysia
Thank you I don’t need
Your Wahabbi sentiments
Or Majnon telling
Me that Scourging in not Islamic
Well we are Shia adherents
We are Shia flaggelants
Remembering Karbala
The Holy Prophets descendants
Our blood to show yazidiayat
As an advertisement
Hussain is Humanity
As an acknowledgement
Empty vessels make the most noise
Forgetting Muslims killing Muslims
All other such incidents
Anti Islam destroying Islam
The Jehadi elements
But you wear blinkers like
The rest of your somnolent brothers
Don’t see such events
A world terrorized
By a handful of disgruntled insurgents
Lal Masjid a Terrorists den
Instead of a religious monument
Gun toting man destroying students
I don’t need your overzealous
Stimulants
If you leave your stupid remarks
On my picture post s I will
Simply delete your comments
Without needing to circumvent
Empty vessels make the most noise
From me more than just a statement
Live and let live fractured in segments
I am a Shia Muslim
I don’t need Anti Islamic compliments
By firoze shakir - July 13, 2007