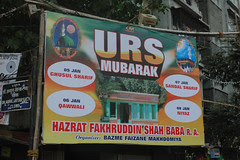 As soon as the Urus of Makhdoom Shah Baba ends , the Urus of his devoted disciple and companion Fakhruddin Shah Baba begins also at Mahim.
Makdoom Shah Baba in his life time had bestowed a boon on Fakhruddin Shah Baba , that those who wanted to visit his tomb must pay respect first to Fakhruddin Shah Baba , so all the sandal processions that came to Makhdoom Shah Baba had to circumvent through this Shrine situated on the main heavy traffic road of Mahim.
Its a small Shrine , in cramped surroundings but highly respected by the locals of the area.Its all lit up for the Urus .
The Chancawalli Rafaees also make this place their next haunt , the Holy Fire or Dhuni is set up, and Handi and Marshad Baba hold court.
Sher Ali Baba is not around for this do.
Food is cooked on the Dhuni, supervised by Barsati or Maun Baba..
Tea Sufi style with lots of butter thrown is an appetiser to the rounds of chillum, heavily laden with Bombay Black hash.The burning down of Manala village does not affect the supply of this narcotic.Most of the affluent Bawas have connections with drug suppliers so you might get a taste of Afghani too, or Peshawari weeds..
I met a Naga Sadhu who is known as Langoti Baba, from Haryana , very highly educated and who is also a Sufi.. a rare heady combination..he is a mystic and stays at Haji Malang in the caves .
Farukh Baba and Don Jaun Baba with their good looks and full open hair are the most popular rafaees , none to beat them in swordmanship skills .
Shahenshah Baba too is a master craftsman at body piercing.
So today at about 6 pm I shall leave my shop to shoot the sandal.I shot it last year too, but had to abort it as I went into a trance known as Kaif..
Had to be revived when they splashed rose water on me and Shahenshah baba uttered some Koranic verses..
I than left for home.
As the lane this procession passes by to reach Makhdoom Shah Babas Shrine and back to its place of origin is badly lit the pictures are not too appealing either.

Marziya and her Dad
Originally uploaded by firoze shakir photographerno1

Marziya in a Maze
Originally uploaded by firoze shakir photographerno1

Email ThisBlogThis!Share to TwitterShare to FacebookShare to Pinterest
Labels: मर्जिया