The Posseseed Man
Originally uploaded by flickr photographerno1
chained to ancient
satanic law
flapping his chicken neck
in a devils claw
man clings to save
his drowning soul
from a locked jaw
mired waters
hope as
a last straw
as they beat him
from his putrid flesh
his dead blood draw
some who
mock laugh and guffaw
from this world of
superstitious pain
his soul wont withdraw
beating his head
breaking his head
mercy ya allah
reliving life
unliving life
a tragic life flaw
By firoze shakir - July 11, 2007 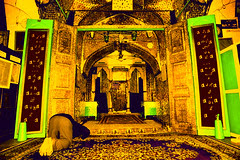 Moulah Ali Shrine Hyderabad.
Originally uploaded by flickr photographerno1
Perched on top of a hillock is Hyderabads famous Shrine of Hazrat Ali, followers from far and wide come here to pay their floral tributes and invoke the first Shia Imam for blessings.Beneath the Shrine at the foothills is the Shrine of his brave son Hazrat Abbas ..This is my new series I visited Hyderabad almost 5 years back, pictures shot on negatives.The first time I came to Hyderabad to shoot Ashura all by myeslf ,than I came again to shoot the Chehlum, this time with my wife Afshaan.Hyderabad the fabulous city of the Nawabs is grandeur personified , the people of Hyderabad , absolutely honest, hospitable and even the poorer lot totally humble.For the Shias of Hyfderabad Moharam is a way of Life , almost Life itself.The Hyderabadi Moharam fervour is a collective ethos of spirtuality.Azadri E Hussain , is awesome here in Hyderabad.Ony black shirts and clothes for the mourning period that lasts 2 months , and eight days.I was lucky to have met Sajjad Bhai a Shia cop who was my host , who really opened doors , I have never seen a Momin like him, he carried my camera bag , while I scourged behind the Bibi Ka Alam.I was new to photography , so there are flaws but I am sure you will see the brighter side of a culture , the moods the vagaries of Shia timelessness.Forgive me but I continue with the Shia pilgrimage .Showing you Shiasm captured from a lens of a poet..and street philospher .I tweaked this as it was quite blurry , but man bowing to a greater divinity a thought poetically focussed showing his vulnerability and mortality .
By firoze shakir - July 11, 2007

The Killing Fields Of Islam

According to a report in the Times Of India :“The Ghazi brothers are basically land grabbers.They built the mosque and the madarssas illegally .Mosques and madarssas cannot be used for armed struggle .The so called jihadis have damaged the image of Islam.”observed Islamic scholar Asghar Ali Engineer .“Such elements need to be firmly dealt with.”‘Muslim women educationists are equally angry at the wayThe women have been used as shields in the besieged mosque.

ISLAMABAD: Abdul Rashid Ghazi, the Islamist cleric who led Lal Masjid’s militant confrontation with the Pakistan Government, was killed in fierce fighting along with at least 50 other suspected militants during an all-out strike on the mosque by the security forces that began in the early hours of Monday and was continuing late on Tuesday night.The security forces lost eight men and 23 were wounded.“Operation Silence” began minutes after a 13-member government delegation, which made a last-ditch effort to negotiate fresh terms of surrender with Ghazi, announced that the talks had failed. Heavy explosions shook the ground in the capital and the sound of gunfire, including heavy machineguns, erupted every few minutes.50 arrested Military spokesman Major-General Waheed Arshad said in the afternoon that 50 people were arrested trying to escape the mosque as the operation began. At least 54 people surrendered, among them 27 children and an equal number of women, including Ghazi’s wife Umme Hassan, who was principal of the Jamia Hafsa seminary.Interior Secretary Syed Kamal Shah announced that Ghazi was killed in “crossfire” when security forces were clearing a basement in the Jamia Hafsa adjoining the Lal Masjid compound. The militants who were with him in the same room and providing him cover are also reported to have been killed.Step-by-step approach Gen. Arshad said the security forces were adopting a “step-by-step approach” out of concern for the lives as a number of women and children feared trapped in one of the basement rooms, and that was why it was a slow operation. He said the operation had taken more time than originally estimated as the militants were “well-armed and well-trained”. “They are using all kinds of weapons like rocket launchers, grenades and small arms, and they are offering a lot of resistance,” he said. “They are fighting room to room, and have taken positions on the minarets of the mosque also.” 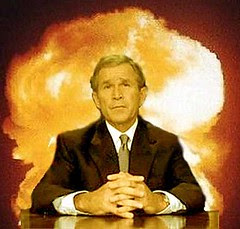