The Shias of Mumbai on 9 Moharam Juloos, originally uploaded by firoze shakir photographerno1.
By Firoze Shakir Photographer No1 - May 19, 2010

The Shias of Mumbai 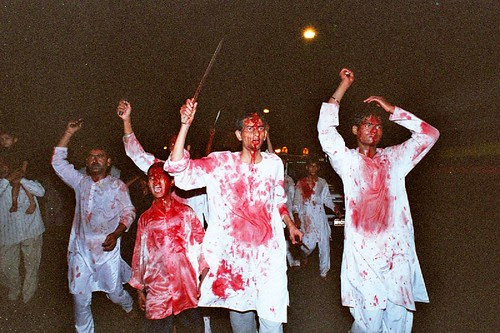 The Shias of Mumbai, originally uploaded by firoze shakir photographerno1.


Shia Islam (Arabic: شيعة‎ Shī‘ah, sometimes spelled Shi'a), is the second largest denomination of Islam, after Sunni Islam. The followers of Shia Islam are called Shi'as but are also known as Shiites or Shi'ites. "Shia" is the short form of the historic phrase Shī‘atu ‘Alī (شيعة علي), meaning "the followers of Ali" or "the faction of Ali".[1]
Similar to other schools of thought in Islam, Shia Islam is based on the teachings of the Islamic holy book, the Qur'an and the message of the final prophet of Islam,[2] Muhammad.[3] In contrast to other schools of thought, Shia Islam holds that Muhammad's family, the Ahl al-Bayt ("the People of the House"), and certain individuals among his descendants, who are known as Imams, have special spiritual and political authority over the community.[2][4] Shia Muslims further believe that Ali, Muhammad's cousin and son-in-law, was the first of these Imams and was the rightful successor to Muhammad[5] and thus reject the legitimacy of the first three caliphs.[5][6] Shias have come to account for roughly one-tenth of the Muslim population worldwide.
Although there were several Shia branches through history, nowadays Shi'a Islam is divided into three main branches.[7] The largest Shia sect in the early 21st century is the Ithnā ʿAshariyyah[8], commonly referred to in English as the Twelvers. Twelvers constitute the majority of the population in Iran,[9] Azerbaijan,[10] Bahrain,[11], and Iraq. Countries with a significant minority of Shia are Syria, Lebanon, Kuwait, Pakistan, India, Afghanistan, Saudi Arabia, Turkey, United Arab Emirates, Mauritius, Trinidad and Tobago, Guyana, Oman and Yemen. Other smaller branches include the Ismaili and Zaidi, who dispute the Twelver lineage of Imams and beliefs.[12]
The Shia Islamic faith is vast and inclusive of many different groups.[1] There are various Shia theological beliefs, schools of jurisprudence, philosophical beliefs, and spiritual movements.[citation needed] Shi'a Islam embodies a completely independent system of religious interpretation and political authority in the Muslim world.[citation needed] The Shi'a identity emerged during the lifetime of Muhammad,[13] and Shia theology was formulated in the second century.[14] The first Shi'a governments and societies were established by the end of the third century (after Hijra).[citation needed]

More at the link.. 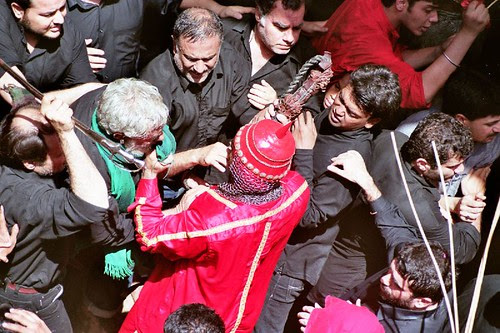 Shimr Ibn Thil-Jawshan was a soldier in the Ummayad army during the battle of Karbala, in southern Iraq that occurred in the year 680 AD. He was the maternal uncle of Abbas ibn Ali.
In battle, he was responsible for beheading Husayn ibn Ali, the grandson of the prophet Muhammad. He was also instrumental in pillaging the camp of Husayn after raising his head on a post to declare his victory.
Although the apparent battle was won by the sadistic beheading, where Shimr began beheading the grandson of Muhammad. Shimr and his camp continued to pilliage the camp of Husayn which was only left with women and children and Husayn's son who was ill, and few belongings of no value. The army of Yazid then continued to ruthlessly drag this camp from Iraq to Syria by foot tied together with ropes.
This event, which occurred on the 10th day of the month of Muharram (October 10, 680), is known as Ashura and is commemorated by Muslims all over the world in different ways.
The battle of Karbala was prompted by Yazid ibn Muawiya's quest to obtain power over the Muslim world, which interestingly enough Husayn bin Ali expressed no interest in obtaining for himself. Lanat Ber Shimar was dushmanan e Ailbait

A Shia Child and His Heritage

A Shia Child and His Heritage, originally uploaded by firoze shakir photographerno1.

he has cut his forehead
an oath fulfilled in blood
that he shed..
he wears black
his moment of grief
the color red
droplets like a little
stream
flowing from his head

Barrister Murtuza Lakha Has Left For His Heavenly Home 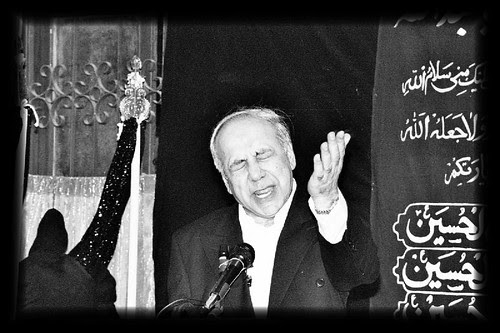 My son informed me just now that barrister Murtuza Lakha expired today I can hardly believe it he was a devout Shia and a powerful Shia orator too.

He was very fond of both my sons Asif and Saif.

I offer my condolences to his family and pray God give them the strength to bear this irreparable loss .
May his Soul Rest in Peace

Barrister Murtaza Lakha An internationally renowned speaker and author on Islamic matters; has been giving lectures worldwide for over 20 years. He is a retired barrister in London after having been in practice for over 45 years. He now devotes most of his time to lecturing and writing on Islam, particularly in relation to the understanding of the Shia Ithnaisheri perspective. He has been a long-standing advocate of interfaith dialogue and engagement. 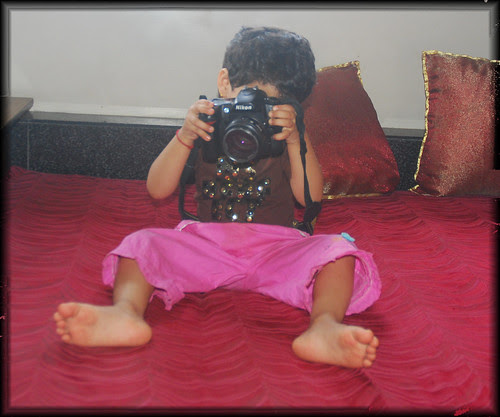 My Tryst With Hijras Can Never End

My Tryst With Hijras Can Never End, originally uploaded by firoze shakir photographerno1.

The Barefeet Blogger and The Hijda In The Train

The Barefeet Blogger and The Hijda In The Train, originally uploaded by firoze shakir photographerno1.