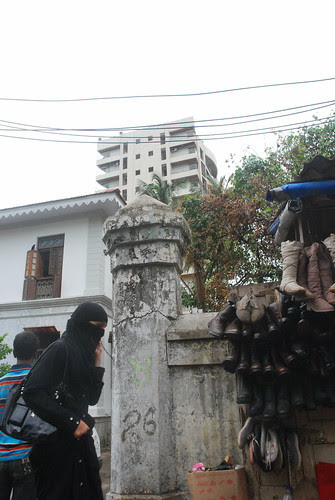 These are pictures I shot before I left for Ajmer and am posting them now , I have always been fascinated with the spirituality of the hijab..its holistic harmony with its surroundings..

And I talk about the hijab indigenous to Muslim society, in India the hijab does not have any such opposition as one finds in Europe .

Hijab stories will never end but Hijab in India is a garment of grace modesty and harmonious dignity.. sartorial serendipity.

As I come from a modern liberal Shia family , the modern liberal applies to me , we have no issue with the hijab..its a option you take to wear it or dont wear it.

My wife my daughter in laws wear it so does my 2 and a half year old grand daughter Marziya.

While coming back from a tiring trip from Ajmer , a bus drive from Ajmer ro Surat followed by another bus trip from Surat to Vasai..I encountered a Hindu girl with the end of her Rajasthani saree used as a veil or Ghungat .

She sat by the window and light filtered in revealing the silhouette of her femininity..I shot several frames ..the boys traveling with her did not know I was shooting her ..

I also shot a Muslim girl at Taragadh a mountain top near Ajmer writing an Arzi a request for a healthy child .., and women of all faith come here as the fruit of the Gondi tree is famous for barren women as the history of this place signifies.

I shot 22 GB all in a few days, the Urus , the Rafaees the Malangs the Kaif which I participated and beggars and the inimitable Hijra queens from all over India.

Babita Naina and Khushi from Mumbai , Kareena , but the most exotic and a very new nubile hijra called Raveena .

I must have shot over 100 pictures of Raveena hijra of Aligarh..now part of Gopal Haji and Babitas hijda gharana.


Madhurima Ma the head of the HIjras of Park Site saw that I was fed and took great care , I call her Ma and she treats me like her own son.. she and her chela Baby..

Kamini was there with a novice nubile hijra called Muskan ..


And it is not a boast but I shoot hijras differently, the hijra beauties I shot are very rare species you will never see in your entire life time.

I shot my two favorite eunuch children Mona and Nandini.


I was given hospitality love kindness by my host Peersab Fakhru Miya Hijra No 6...his children Farid Miya and Qambar Miya.


I met Noubat Ali Baba the head of the rafaees, Damadar Rafaees and Malangs, but I spent a lot of time with the Hijra bawas and I was barefeet through out my stay at Ajmer and Taragadh.. I climbed Taragah barefeet 5 km..a path that is a virtual beggar paradise , open sores wounds and strange deformities of body and spirit.

I was caught in a stampede at the doors of the dargah , I fell down people walked all over me till I was eventually saved by the Khadim and the crowds.
I hurt my hands and legs but my camera was intact.

And reaching Ajmer is nothing short of a miracle..I will show all this like a story board from Dadar railway station to Ajmer .

I shot a lot of stuff from the upper tier of my bus .. sleeping coach from Ajmer to Surat and another bus from Surat to Mumbai for my return journey.

One person who would have liked the spiritual ambiance of this place is Dr Glenn Losack MD.

Marc De Clercq had walked from Delhi to Ajmer with Malangs and Damadar Rafaees.
We spent some time together along with another French photographer Yasser.

I missed my Hijra Guru Laxmi Narayan Tripathi she was caring for her sick father I was told..and everyone missed Laxmi such is the power of her androgynous persona.