The Poetry Passion and Pathos of my Bald Head . 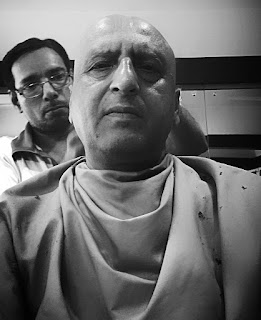 Much before I was plagued with 3 diabetic boils that after wrong treatment went out of control I had no choice but to shave off my tresses .
I have grown dreads I have had extensions but my scalp is far too weak to take the weight of the dreads so I chopped them off years back .
In 2011 I was initiated as a Dam Madar Malang ...these guys have huge heads rolled up dreads over 18 to 20 feet long ..I was tempted to grow my dreads again than came the boils and I have been shaving my head every week at Rolex salon Bandra Bazar I get it shaved by Anees Bhai the senior hairdresser as he is careful and takes care of not touching my boils .
I hate my Bald pate .
But there is no option the healing process is very slow ..first they caused me a lot of pain but now there is one boil that gets on my nerves .
And the heat and humidity aggravate the boils giving in to itching and scratching .
But I think I have decided now to grow my hair .
Though it is during Moharam Ashura and Chehlum when I cut my head with two daggers that my scalp becomes unmanageable.
But I won't stop cutting my head .
I have other health problems my gall bladder stones and this is when I am on a sticky wicket in Ramadan I start bleeding and urinary tract gets blocked so I am caught between the deep sea and my comittments .
This year too Marziya will fast she takes after my wife and now Nerjis only 5 insists she too wants to fast .
But I have not seen Marziya Nerjis for over 2 months ...and that is driving me plumb crazy .
In the afternoon I was at Mr KRK s house .
And he is one of my most loyal patron ...he loves to wear suits and they suit him too .
Despite the fact he does not have a 56 inch chest he commands respect ..and he gets it easily .
I was planning to go to Bandra Talao but it's too hot so I came home directly from Lokhandwala MHADA.
By Firoze Shakir Photographer No1 - June 03, 2016