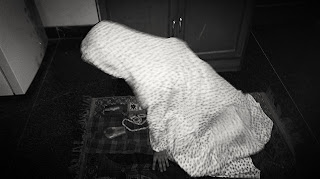 Every morning without fail come what may when my wife finishes her morning prayers she wakes up Marziya ..my wife is the Muezzin of my granddaughter ..
Marziya does not miss the morning namaz it's been a year now .
Nerjis and Zinnia are also learning the namaz from my wife and Marziya
They have their own prayer mats and the chadors from Karbala .
And both Nerjis and Marziya are crazy about street photography .
By Firoze Shakir Photographer No1 - March 28, 2016 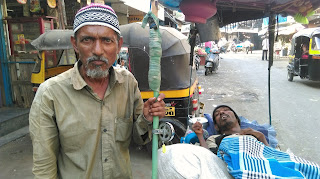 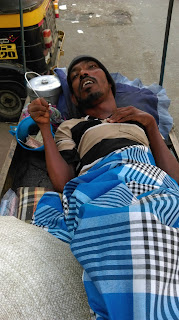 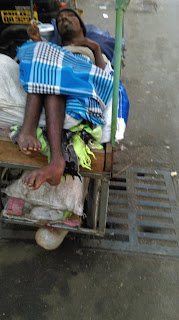 Tajuddin the physically and mentally challenged beggar is a new entrant to the iconic band of beggars at Bazar Road my backyard .
Earlier when I went to take his shot his handler made a face but Tajuddin signalled to him to let me shoot him and he seemed to enjoy the attention and my presence I gave them money and bought him some snacks for breakfast .
While returning from Tennis I saw them Tajuddin lit up and I told him that Tajuddin Baba of Nagpur is a famous holy entity..
Here I must also thank these beggars that add to my humility and to my street stories and I complete an year at Facebook without deactivating my account ..I normally self exiled myself to de tox and de stress and returned to Facebook after a long hiatus. .I needed to get out of this rusty birds cage and 're learn to fly ..I never blogged at Facebook but I am doing it now all my new stories are posted at Facebook copied pasted from here to Flickr Blogspot and linked to Twitter .
It's easy for me to upload my street pictures from my phone to Facebook earlier my phone pictures were synced to my Flickr timeline ...
I have taken a sabbatical I see the garbage truck my conservancy friends I wave out to them without shooting any videos ..I have to yet upload the pictures and videos I shot on my DSLR of the Easter Sunday Latin Mass By Fr Jaun at St Peter's chapel above the main Church .
Shooting the Church from above has a beautiful vantage ..and perspective .
I paid a guy some money he eats Ekru and his Bhaiyya supplier gets the best stuff from Bhaucha Dhakka so this guy who lives in the transit camp will buy and keep it for me ..he has worked in the Gulf ate Hamooz here known as Ekru .
I have to ask him for the Arabic recipe for making Ekru .
For a long time since last Moharam I had stopped eating fish ..the Shia s don't eat fish for two month eight days of Moharam ..though the Bohra community starts the first day of Moharam with fish .
Fish is considered a festive dish among the Shia s and you will see it on old Lucknow arches doorways too ...
The Nahari my wife made recently for a relative who is staying at our place she is leaving for Karbala ziyrath..was buffalo meat we hardly eat it otherwise but Nahari tastes better ...and because of the beef ban it is tender buffalo meat without any fat ...no bones at all. The Kulches were from Lucknow .
Wife likes to cook and she cooks with a Lucknowi mijaz ..the masalas main ingredients are from Lucknow .
The dish loved by all my three granddaughters is Biryani ..
Mostly chicken biryani my granddaughter s don't eat fish at all.
So imagine a few frames of a Muslim Beggar are catharsis to empty the emotional pot of my restless angst . Shooting storyless pictures devoid of feelings devoid of passion or pathos according to me is certainly not photography the way I was taught by my Gurus..
A picture must make you talk even in silence evoke touch your strings within...
Photography made me a talker ...I talk but it is the picture that adds the colloquial expressions like the mystic art of the ventriloquist.
Happy Morning from Bandra Bazar .

The Life And Times Of A Lonely Doll 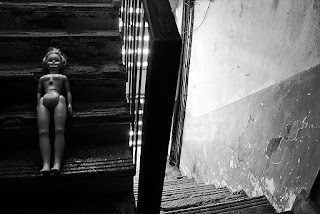 abandoned
brutalized
battered
mauled
rise and fall
of bandras
sad forlorn
lonely doll
once the pride
of the neigbors
daughter .. for
help she calls
thrown out of
the doll house
deathly pall
her painful
silent cries
tormenting
the weeping
walls ..
helpless once
upon a time those
good days she recalls
hugged by the pretty
child lovely new dresses
for this barbie doll ..

as she reminisces
her sudden downfall

Appu My Friend A Story Without End 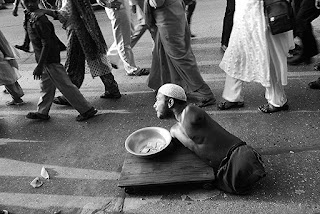 Happy Morning From Bandra ,, and a sweet memory called Appu.

I first met Appu about 20 years back those crazy days I stalked Chor Bazar for old cameras , books and other memorabilia,,and I honed my craft as a street photographer shooting reluctant Muslim faces ,, I tried to shoot candid those ealy days of Film slides and BW and I was a Nikon user when I started out , I gave up Nikon completely in 2011 when my ex boss presented me the Canon EOS 7D ,

I was abused by Appus handlers for shooting him at Chor Bazar creating a nuisance and a large crowd close to Bori Mohalla ,, the handler lashed out at me saying we photographers shoot the beggars to sell the pictures to foreign Press ,, I was shocked at her knowledge and my moderation.

Appu saw I was hurt called me over and we became friends I shot Appu for many years as he kept moving away from Chor Bazar to Musafirkhana Crawford Market to Minara Masjid and on Wednesdays at Mahim Church lane .

My granddaughter Marziya met him when she was 2 year old and she has never forgotten him.. she is 8 now and she wants to shoot Appu too so I search for him when I pass his old haunts ,,I once gave him my visiting card too.. and never treated him as a beggar ..every time I met him I gave him Rs 100.. and tried to invite him to my house at Bandra .. but he would smile this migrant from Assam ..

The Tablikis of Mumbai forced a skull cap on him and he began to grow his beard .. begging in their areas was not easy.. their spirituality had to be adhered ,,, and he begged in the rains fully drenched at the Shia cemetery during Shia Shabbarat ,, I shot him there ..

Appu was one of the reasons I began to walk barefeet ,, to feel the earth and to walk with him.. he walks as a stump..no hands no feet .. and if I had money I would have got him a wheelchair those days but he would tell me he lived on the roads and the druggaddicts had stolen his money too,,so he had a handler later his mother uncle or even his sister ,, and the goats of Chor Bazar and the flies troubled him a lot ,, but Appu was always there smiling he lit up the moment he saw me with my camera ,,I really begin my tryst with photography shooting beggars ,, I paid them and they were the best role models ,,

It has been many years now I have not met Appu .. and this is  my early morning tribute to his memory ,.

Fr Jaun My Mentor Who Cosmically Connects Me With Christ 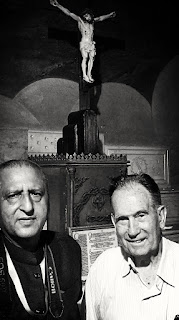 Many years back when I stayed at 21 De Monte Street Bandra I saw Fr Faun in my building he had come to bless the home of my neighbor Trevor Fuis ..
Fr Jaun knew me so I innocently asked him do priests bless only Catholic homes or do they bless other people's home ..Fr Jaun gave me a smile came to my house met my kids wife blessed my house and shared the hospitality of my wife's cup of tea
And from that day Fr Jaun and I have been connected firmly in faith and humanity .
Both my granddaughter s Marziya and Nerjis have been very close to Fr Jaun and every Easter they came to meet him at the Church ...but this year I did not bring Nerjis I was going to shoot the Easter Sunday Latin Mass using my Manfrotto monopod so I would not be able to handle her and good Fr Jaun asked me about them .
I am indebted deeply to the Christians for what I am my schooling my upbringing after my parents was their gift to me they got rid of my rough edges ..they made me understand the real meaning and essence of mutual coexistence and above all tolerance .
I met some great priest s in my childhood Late Fr Leslie Ratus and late Fr Stephan Nazareth both at Holy Name my Alma Mater .
And now 65 years of age it is Fr Jaun who has helped me groomed me into becoming a good human being .
A lady at the Latin Mass today was surprised when she came to know I was a Muslim .
I told her sincerely I was a good Muslim as my school my teachers my priests had helped me .
I did not tell her that in my early school years I opted for Catechism instead of Moral Science .
Thanks all my Christian friends all of you ..Happy Easter to all of you .
By Firoze Shakir Photographer No1 - March 28, 2016