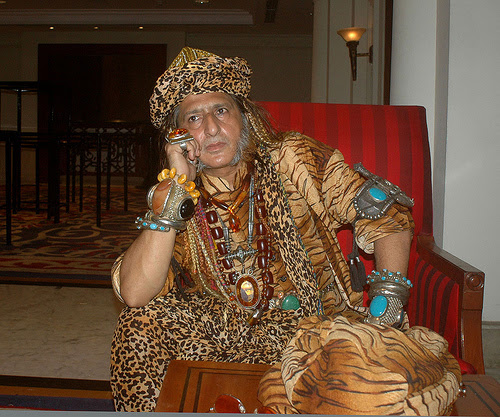 Today I am under the weather .. I have many reasons ..one of them I was awake all night killing bed bugs .. later in the day I rushed to Kurla East to return 2 pairs of Senegals I bought this without any knowledge of it for Marziya Shakirs plantation tank and so my balloon Molly is now with one eye and smaller fishes dead ,, I will take something in exchange later from this guy the largest importer of imported fish.. in Mumbai.

On my way back it was a horrible feeling of giddiness and maybe my sugar level went down..I had an orange in the rickshah. Removing the 4 sengals from the tank was what might have stressed me up,,

This picture was shot at Epson product event by my Guru late Mr Black and White Jatkar ,,, he was my true friend guide and also a father figure ,,I miss him terribly sometimes ,,Ram Mahal Shivaji Park...his little room and yet photography wise comfortable a Temple Of Hope And Learning..

I am now ensconced at home ..waiting for another night of bedbugdom.. and their attachment to me my wife cosmically mystically..

So a picture is a picture but a blog always remains a blog..I use Facebook not for chats not for gossip , not for poking not to be added to groups without my permission I am not a group, congregational or Anjuman person ..

And I did not carry my camera , sometimes a part of me that shoots the street mocks me ..telling me with undue respect ,,, Fuck Shakir only photographers need cameras ...do you need one,,,, I move on to the next thought on the agenda of my aging angst... We wont be found in newspapers .. it would be an embarrassment ..a 5 year old and a two year old paying their tribute to Prof BW Jatkar through my cosmic eye..

Nerjis was called the Google + baby .. and Marziya chip of the old blog..I deactivated both their accounts on Facebook...

All three have website but Marziya and Nerjis both Indibloggers have retired from blowing their trumpet ..

I have pictures in my camera I shall upload leisurely ..and Aviary has added another dimension ...mono chromatically .. 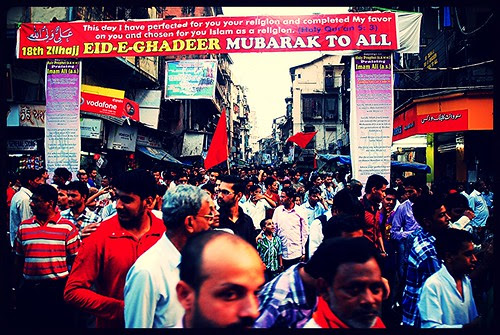 Eid al-Ghadeer is a festive day observed by Shia Muslims on the 18th of Dhu al-Hijjah in the Islamic calendar. This day is to celebrate the appointment of Ali ibn Abi Talib by the Islamic prophet Muhammad as his immediate successor, as per Shia belief. It marks the anniversary of Muhammad's sermon, described in Hadith of the pond of Khumm, in which he stated, Whomsoever's master (maula) I am, Ali is also his (maula) master. O' God, love those who love him, and be hostile to those who are hostile to him.[1][2][3]"من كنت مولاه فهذا عليّ مولاه أللهم والِ من والاه و عادِ من عاداه"[4]
Shia Muslims celebrate the day with a tradition of taking a mass oath to reassert their commitment to Islam, in the same manner as individual Shia adults take an oath on reaching adulthood. This they believe to be continued from the period of their Imam.
Sunni Muslims do not celebrate this day as they feel that it not an established celebratory day. They also do not accept the Shia belief that the Prophet Muhammad appointed Ali his successor.
A few months before his passing on, Muhammad – living in the city of Medina – made his last religious pilgrimage to Makkah in a trip referred to as The Farewell Pilgrimage. There, atop Mount Arafat, he addressed the Muslim masses in what came to be known as The Farewell Sermon. After completion of the Hajj, or religious pilgrimage, Muhammad turned back towards his home in Medina. On the trip there, he stopped at the pond of Khumm (at present Al-Johfa) and appointed Ali as the master of believers and also took a covenant about his mastership from those who were present. The exact meaning of the word Maula (master) is a matter of disagreement among the major sects of Islam; the tradition is recorded in both Shia and Sunni authentic books of traditions but they disagree on the interpretation of the tradition and the event, specifically the word Maula. There are also minor differences in the exact words of the tradition but that is the case for many repetitive traditions found in a single book of tradition as well. The tradition recorded in authentic Muslim books such as Sahih Muslim is that after the pilgrimage, Muhammad ordered a gathering of Muslims to come to the pond of Khumm and there he nominated Ali to be the master (Maula), which the Shias interpret based on the events and the words of the tradition to be an announcement of Ali's successorship to the Prophet, while the Sunnis believe that it was just praise of Ali (a.s) that the Prophet intended to announce in front of his companions among whom were also some who did not like him, and hence the stoppage for two days and the event as well. The wording of the sermon in Shia accounts is as follows:
Oh people! Reflect on the Quran and comprehend its verses. Look into its clear verses and do not follow its ambiguous parts, for by Allah, none shall be able to explain to you its warnings and its mysteries, nor shall anyone clarify its interpretation, other than the one that I have grasped his hand, brought up beside myself, [and lifted his arm,] the one about whom I inform you that whomever I am his master (Maula), this Ali is his master (Maula); and he is Ali Ibn Abi Talib, my brother, the executor of my will (Wasiyyi), whose appointment as your guardian and leader has been sent down to me from Allah, the Greatest, Mighty and the Majestic.
References[edit] 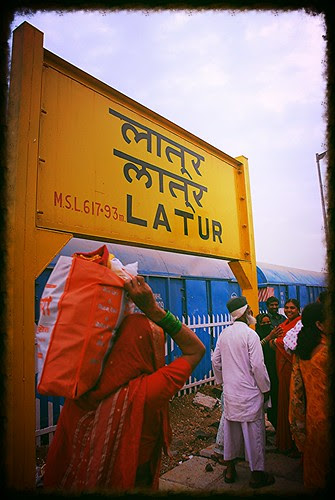 back lighting
the soul of
my poetry
peace
plenitude
zen zenitude
life is faltering
steps reflecting
attitude ,,a pause
a stopover interlude
the camera poetically
pursued ..laid back
lassitude ..within
chaos crowds
a beggar poet
solitude ,,,once
an earthquake
had hit this place
of great magnitude
arising from the
rubble vicissitude
latur a poets
fantasy bound
to hope gratitude

The Tibetans at Latur 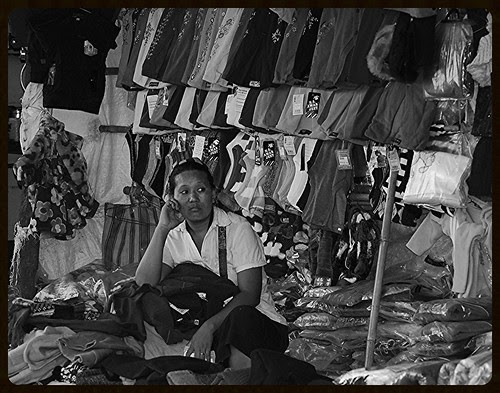 The Tibetans at Latur, a photo by firoze shakir photographerno1 on Flickr.

Once upon a time there used to be a lot of Tibetan ladies selling swollen stuff at CST Mumbai,but there is hardly any winter to talk of in Mumbai..so in October 2010 there were quite a few Tibetan woolen sellers at Latur..and it was pleasant with a nice winter chill.

This lady looked perplexed , business was not that good ,,,the best woolen stuff you get at Chor Bazar , stuff that is washed , dry cleaned and than repacked sold as new in super stores ..specially knitted sweaters ..mufflers woolen caps..mostly at Chimna Butcher Street Chor Bazar..and I am still wondering where will Chor Bazar once the Bohra Boulevard comes up here ..not at Muffadal Shopping Center ..near Nur Bagh... I shot Chor Bazar extensively and than completely stopped it over 6 years now.. also the Kamatipura Flea Market of Wagris.. 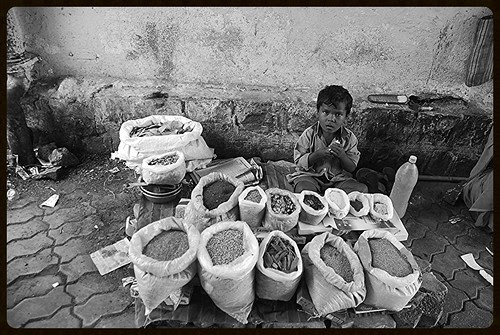 The Spice Seller Boy.., a photo by firoze shakir photographerno1 on Flickr.

I have been awake since 1.30 am..I blog that keeps my mind from being terrorized by bedbugs..I am adding a new dimension to my Latur blogs,,,I shot all this in 2010..and it is here in the streets that you see a vista of changing moods and a tidal wave of human emotions..

Living in Mumbai all my life , had added to the experience of unlearning ,,,

I envy people who can just take off I cant I have a huge load of responsibilities and so the streets in my backyard are fodder for my thoughts,,,

I have no time I have been wanting to go to Canon Master Care Rustomjee to get my cameras serviced but am caught up in something or the other ,,

Nerjis my grand daughter with curls has had a haircut at Bettys ..a Chinese lady..great hairdresser.

I had bought a salamander for Marziya that the surviving black ghosts ate it up..my 3 flowerhorns in a partitioned tank have survived so far...

And I met Mr Raj Sippy last evening he praised me for my acting in Phata Poster ,, Chand Terrace where Mr Raj Sippy stays is on of the most aesthetic and clean building ..all thanks to Raj Sippy , who with his vision has made Chand Terrace the finest habitable place in Bandra..every inch of the facade the exteriors are artistically modified by him.. I told him that he should be made the CEO of Mumbai... he would do wonders , and he his a creative person an artist and has promised to give me a role in his next film..

Another person who has a nice comfortable home ,, palatial and soothing to the senses is Mr Kamal Khan .. I was at his place before I came to Romu Sippys house where I met Raj Sippy.

Kamal Khan is a one man army , and is now busy getting his own film on the floor ,,he is Bollywood most trusted Critic No 1,,,and his predictions come true ,, if he says a film is going to be a hit ..it surely will be a hit..he was telling me most of the people who make films dont apply their brains ,,they expect a hit when there is no content form or story ,, we share a great rapport.. and it is a pleasure meeting him from time to time. 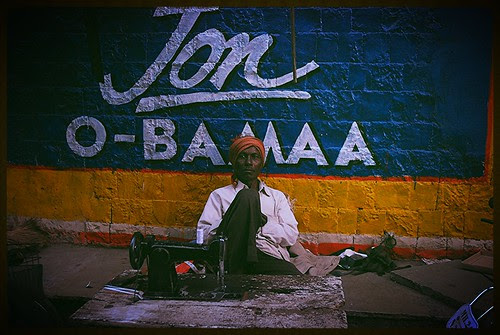 ladies tailor
but alters
gents clothes
jon o bama
of latur,,
re modifies
high couture
sartorial satisfaction
guaranteed ..he hails
from wasseypur
to find him from
the main road of
gol galai you take
a detour,,turn left
in a lane dim obscure
jon o bama ..for sure
waiting for you
a clotheshorse
you complete
your tour,,, 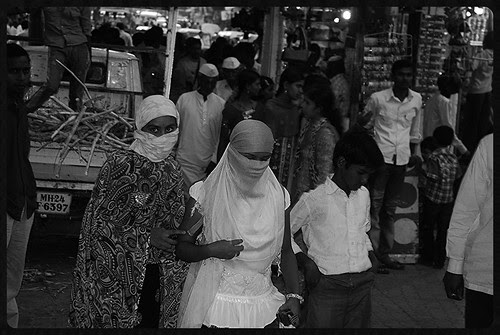 The Hindu Niqab Of Latur,, Quintessential Fashion Statement, a photo by firoze shakir photographerno1 on Flickr.
By Firoze Shakir Photographer No1 - October 23, 2013 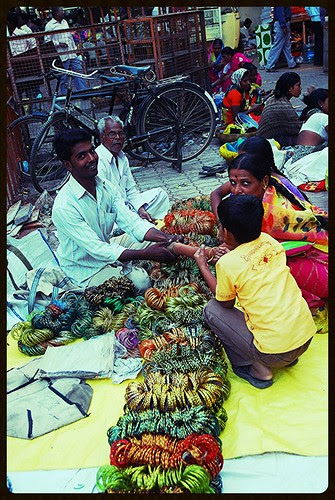 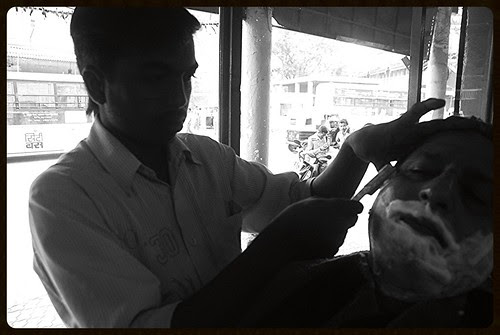 The Razors Edge, a photo by firoze shakir photographerno1 on Flickr.

The Muslim Panwalas Of Latur 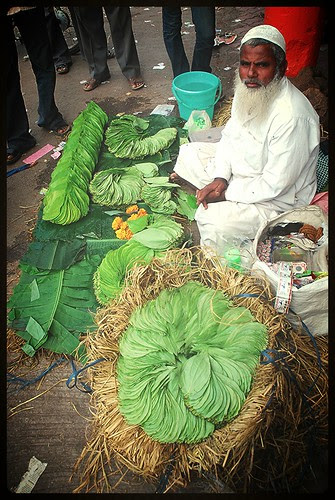 The Muslim Panwalas Of Latur, a photo by firoze shakir photographerno1 on Flickr.