Mumbai The City of Peace Hope and Humanity 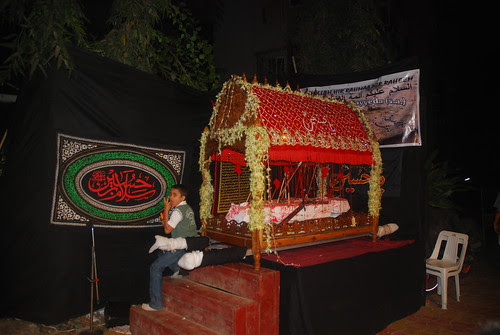 This is my new set at Flickr and I shot this a day before before I shot the English majlis of Maulana Sayyid Ali Naqvi on 24 Jan 2010, but I kept it on hold to post the majlis pictures.


Ali Reza Shirazi stays at Mount Mary bang opposite the Shiv Sena office , and last year his juloos began from his house and ended at the Supari Talao Grounds on the day of the Ag Ka Matam .

Ali Reza Shirazi is a humble Shia devout and his spiritual strength comes from his Mother Parveen Shirazi, and his father a man of few words and sheer simplicity, and because I consider his mother almost like my own , I try not to give this short juloos a miss.
Ali Reza Shirazi is short of man power but in spite of all this he with the help of his trusted friends his brother Ali Aman and well wishers tries to make this message of peace and tolerance a great success.

And everyone his neighbors predominantly Catholic support him and the cause of mutual coexistence..but there was a show of dissent by a Catholic gentleman a bearded person , suited booted who educated was totally crude to the bone, he wanted to bring his taxi in the building and the majlis was going on , I spoke to him politely and told him if he could walk the distance with his wife but he brushed me off as a fly on hs tea xc cup, and I was amazed and shocked , in Mumbai where each community stands for the other all bearing the inconvenience of the Mount Mary Fair traffic snarls , the honking and this man could not bear a few minutes discourse, he approached the cops , grumbling loudly and finally was escorted by them to his building next to where Ali Reza Shirazi lives..I shot his picture with the cops so I am not making up, I used the word tolerance when I talked to him , but how would he understand it if the parish priest has not talked to him about it..

I mean we talk about Aussies bashing Indians but than sometimes we are as bad as them in the way we treat our own.

I had no time to tell him and I would never have that I shoot all communities , I shoot all religiosity simply because I shoot India I shoot Indians and above all I shoot Mumbai the city that s the pride of all our lives..I shoot the Mount Mary Fair too year after year so that the guy away from home who once lived at Bandra can experience the universal love of the Madonna and her Child. I shoot Lal Bagh Cha Raja barefeet from his journey at Lalbagh till Nagpada to show you how the Muslims felicitate the Raja as an icon of our cultural ethos..and I follow him till the end the next morning before he is immersed.

So it hit me in my guts when a man behaves like this he was not on a wheel chair an invalid , and all Catholics fortunately are not like him..and I am a product of a Catholic school never did the padres ever brain wash me in to their fold , I give Jesus respect and also walk with Jesus from morning till evening feeling the pain of the community on Good Friday and participating in the 14 Stations of the Cross..

Though I did advice Shirazi to send letters to all the building people in his complex about the juloos much in advance so they are prepared and not taken by surprise and to leave a path for them to freely walk to their homes wen the matam begins ..And he will adhere to all this because Shiasm stands for Humanity the oppressed and the suppressed.

I only hope more Shias com and help him in making this a landmark juloos of peace , that showcases the tragedy of Karbala the slaughter murder genocide of innocent family people including the grandson of the Holy Prophet of Islam.

The Muslim Beggar Lady..Will Her Life Ever Change 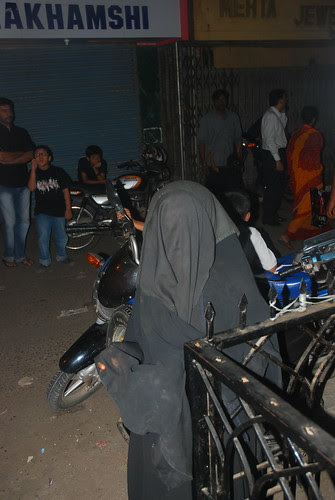 This was shot close to the Indraji Nagar slums , this is the path I take to reach my work place so Marziya knows at a glance life on the other side of the fence, the path she takes is dark, unlit narrow with pipes running across the soul of the slum..that pays tribute to late Indira Gandhiji..Indias own Iron lady with an indomitable strength of steel in time of exigency and adversity..she lives and so does her heritage ..

While we take this path there is a tiny room where a young Muslim girl teaches the slum kids, tutors them and Marziya needs no invitation she goes and sits on the teachers lap imbibing the values of street survival..

And while we reached the spot where Marziya is sitting with a kid , the music blared reminding us of the sacrifice of the father of the nation.. and other freedom fighters of our mother land..and here as a nationalist Indian I think more important than making people recite and parrot Vande Matram , I have no issue with its recital, is to make them to carry the act of loving the mother land in deeds and actions too, a person whatever his religiosity should be willing to die for his country .. and this is what the child must be taught a child that did not witness the freedom struggle..and this is my personal opinion.,.nationalism is greater than anything and requires surrender of mans life in the time of the country's need..

I copy and paste the lyrics on your soul of the song from Jagriti Awakening that was playing in the background..