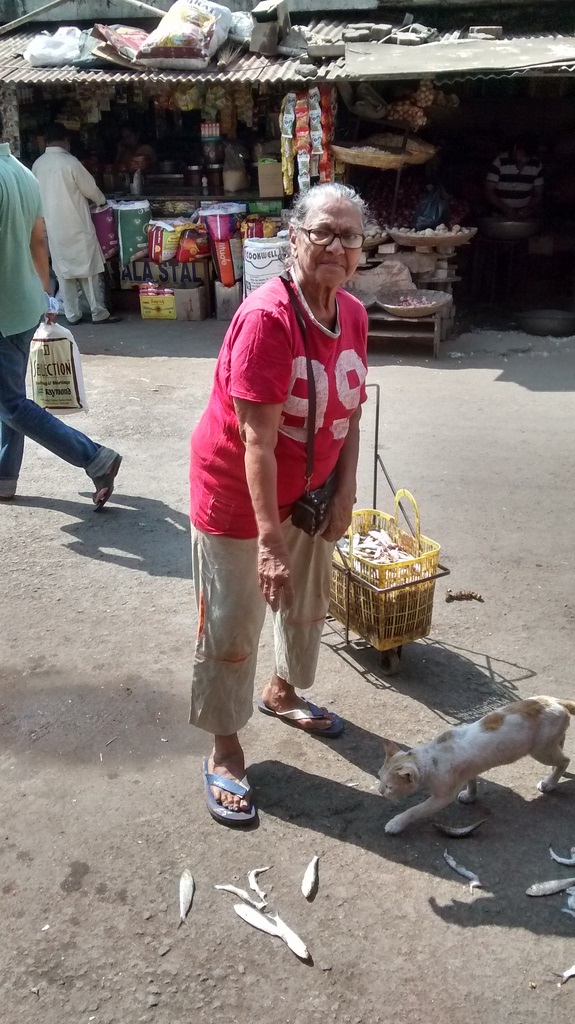 I could never get her name right but I have been shooting her feeding the stray cats in the alleys and back lanes of rustic Bandra ..moving about  with her cart of fish .. and I have seen her in the Bandra fish market haggling with the koli women ..she does not pickup leftovers but buys fresh fish for the stray cats...
The stray cats can smell her from a mile .. and come rushing towards her the Christian spirit of Compassion fills the air and the hungry cats consider this lady their Savior .

I spoke to her and she was grumbling that the few who gave her money to feed the cats have now become stingy..and yet there are kind folks who help her give her money..and she manages to feed them every day ,, every season.

These are people that are the humility and pride of our cherished Bandra .. talking care of others ..

Than there is a Gujrati lady too who feeds the cats ,,

Bandra has some people that media needs to talk about add humanity to their stories instead of running after Bollywood celebrities and nowadays even the waiters at Bandra restaurants consider Roast a bad word .. it has been deleted from most of the menus.. 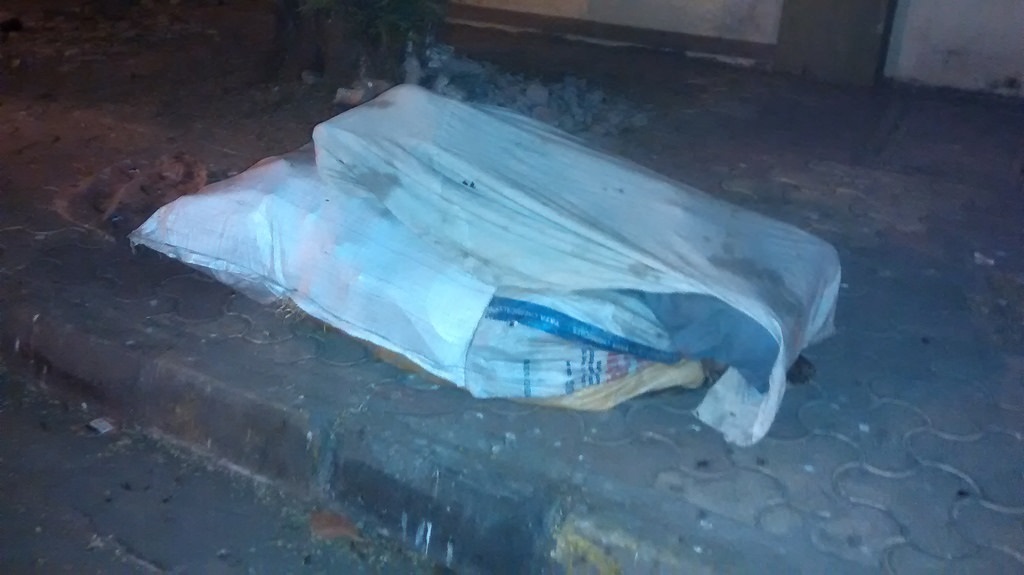 This morning my fourth day of walking I decided to carry my mobile phone ,luckily my phone is not connected to the Internet ...outdoors only to the WiFi at home .

This was near Rang Sharda , first I thought it was a ragpickers bags , than I looked closely it is the ragpicker sleeping cross legged yoga style.
Next to him another ragpicker I presume but as Indians we have more than the rope trick up our sleeves ..

I completed my Bandra Reclamation routine walking from my house till the end and taking an about turn frrom Agasti Building .

Than a turn from Leelavati to MET Grounds to complete the next part of my walk.. I took 8 rounds each round is 280 mts I complete a round in about 4 minutes .. this morning I took 9 rounds and returned via the Bazar Masjid back home .

I shot two new garbage sites to add to my tour of  Open Garbage in Bandra a BJP Stronghold with a lone uninterested Congress corporator .. least interested in the civic affairs of the Bandra he represents ,,Unless Congress wakes up it is going to be decimated in the Municipal Elections in Mumbai.. you can call it a beggar poets prophecy..

And though I am a Am Admi sympathizer I feel they can do well if they chose candidates wisely and not parachute someone from Colaba who does not the backside of Bandra ..the greatest mistake by the Am Admi party during the Loksabha ..someone local with love for Mumbai and above all Bandra .Someone who is not just there to make big bucks but add to the beauty of Bandra marred by 15 years of Congress Rule.

If you visit Bandra where I live I will show you the neglect apathy and the playground for kids near the MET Grounds is run by the Municipality .. a Municipality that is interested in demolitions and big fat bucks ,, they see illegal slums coming up , illegal extensions added to homes shops but they keep mum and hands may have been greased , when the issue gets big than they come with bulldozers .. same thing with illegal religious spaces on the public roads , when they were being built they said nothing than they come to break crosses , Sai Baba mandirs and other such places .

The Mumbai Municipality needs a new tenant after 20 years but than we vote the wrong parties that have no solution for the malaise of Mumbai.

Build statues but build hope better infrastructure too..people that represented Am Admi Party in the Bandra slums were no less than ruffians at least their henchmen were I saw it in the Bandra Slaughter house slums no educated volunteer and I blame Mr Mayank Gandhi they  were only thinking of their deposits but not the common man of Mumbai and this is the harsh truth from a person who does not belong to any political or religious party not even a group.. here or online.

I love Bandra though I am originally from Colaba , Bandra has given me a lot we relocated here in the 80s we went through the 93 riots and we have seen pain , polarization and yet as person we have moved ahead and 60000 blogs on Hinduism should testify to my fascination for Hope and Hindutva,
I shot the Maha Kumbh my Guru is a Naga Sadhu from Junagadh.
And in the riots it was not the Muslim or Hindu who diied it was a part of Mother India.

Who cares for Ghar Wapsi or a manic Mullahs last stand as Ghar Ghar Islam.. a man bigot who thinks politically ,, and the Muslim Awam is more Indian than he can ever be .

As for the Owaisi brothers .. one has to be a real dumb Muslim to be part of their divisive dreams .

I voted for BJP and I was once a traditional Congress voter they took us for granted .. even the riots were part of a greater conspiracy all the riots disasters were part of the Congress Divide and Rule .


And in the next elections too the only wave that will be there will be the wave of the anger off every Mumbaikar seeing his beloved city going to the dogs enough Bhashan get off your Sihasan..